Stephen King Rules, NBC Drools When It Comes to Webisodes

There are plenty of funny original series on the web, and several hundred more that were funny enough to somebody to justify their bandwidth. Me, I'm lovin' Crackle.com's "The Line," the less-hyped Funny or Die offerings, the still-amazing "You Suck at Photoshop" and pretty much anything involving alumni from MTV's "The State," whose members are the Not Ready for Prime Time Players of the web-video era. There is a veritable smorgasbord of funny stuff online, funnily executed by funny people who act all funny and whatnot.

'N' delights in the art of storytelling, backstopping its imaginative narrative with fluid animation and a film-quality orchestral score.
Credit:
Marvel Characters Inc.
Dramas struggle online
But nobody, with the exception of the "Lonelygirl15" folks, has done drama particularly well. I can think of several reasons for this: Dramatic actors aren't as game for experimentation as comedic ones. Dramas demand attention spans, which remain a rare and precious commodity on the web. Multicharacter dramas with special effects, well-tailored pantsuits and chunky cop dialogue ("You want a warrant? Warrant this, buddy!") are challenging to improvise on the cheap.

To date, every high-profile online drama -- hello, "Quarterlife" -- has come across as little more than a shrink-rayed TV show. The only thing that distinguishes them from four-airings-and-out series developed for TV is the novelty factor, that they're delivering the familiar in a comparatively unfamiliar online setting.

I held out hope that "Gemini Division" and "Stephen King's N" might reverse this trend. Both boast some serious creative muscle behind them -- NBC and Electronic Farm Entertainment for the former, the corporate tag team of Scribner, Simon & Schuster, CBS and Marvel for the latter -- and both feature top-notch production values. Hell, "Gemini Division" looks sharper on my computer screen than the bleached-out second season of "Mad Men" does on my supersized TV set (has AMC figured out what's up with that yet?).

One out of two ain't bad. I'm not a fan of histrionic, blurbable "[proper noun] is [adjective denoting wild enthusiasm]!"-type statements, but "N" is perhaps the most inventive narrative series in the history of the medium. Adapted from a Stephen King short story set to be published in November, "N" tells the tale of a psychiatrist pulled into the madness of one of his patients. It does so in a series of 25 comic-book-like episodes drawn by Alex Maleev and colored by Jos? Villarrubia (I don't know who these guys are, but my comic-book-guy pals tell me they're a big deal, so I figured I'd pass along the info). The episodes, about 90 seconds each in length, have been unveiled at the pace of one per weekday since July 28.

Thrilling discovery
I don't want to reveal too much about the series, lest I destroy the sense of discovery for those who haven't yet watched. Suffice it to say that "N" delights in the art of storytelling, backstopping its imaginative narrative with fluid animation and a film-quality orchestral score. Go check this out. Now.

Not that King has ever had much trouble in this regard, but "N" should help sell a lot of books. After watching roughly three-quarters of the series, I'm rabid to get my hands on the source material. Still, I sure wish somebody associated with "N" would've paid more attention to the type of commercial content that precedes episodes screening at the official website (you can duck the dreck by spending $3.99 for a season pass at iTunes).

The tone of "N" is dark and dirty; the tone of the oft-replayed General Motors ad about how the company is "stitched into the fabric of our country" may kindly be described as pep-rally-ish. The spot, which aired seven times during my viewing of the series, clashes violently with "N" and makes me dislike the company, its wingnut employee-discount gimmick and the ethnically diverse cast of actors with whom it conspicuously populates the ad. The other marketers involved -- Excedrin, MasterCard and Microsoft with its notorious "people hate us! yay!" Vista spot -- fare slightly better, if only because I was treated to a mere single airing of their ads. Listen, I realize that somebody has to pay for "N" and I'm super-OK with viewing marketing content as my end of the quid pro quo, but companies can't afford to be this careless about where they park their ads. 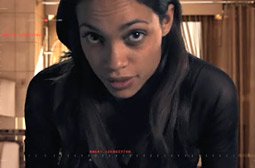 'Gemini Division' takes a product and attempts to craft a show around it, and the results are exactly as soulless and stupid as you'd expect.
More product than placement
Of course, even the apple-pies-and-virgin-brides GM spot trumps "Gemini Division," which is a commercial masquerading as dramatic fiction. My sole takeaway from the first two episodes, which debuted on NBC.com and Hulu this week? Microsoft and Cisco have collaborated on some kind of laser-outfitted ninja phone/browser/swizzle stick that enables enterprising creative types to structure a web drama around its "transmissions." That's really all "Gemini Division" is: the ever-fetching Rosario Dawson reciting monologues into the phone/camera thing about her alien-robot-glyph of a fiance and -- I'll let the NBC.com marketing-copy scribes take it from here -- "a global conspiracy involving covert military operations, bizarre genetic experiments ... and a mysterious organization known as GEMINI DIVISION."

I don't consider the continued encroachment of product placement a sign of Western civilization's decline. In fact, I find that such tie-ins often lend shows and movies authenticity -- take "The Sopranos," in which the status-obsessed hoods and housewives trumpeted brands that were almost as big a part of their identity as their ethnicity. "Gemini Division," however, takes a product and attempts to craft a show around it, and the results are exactly as soulless and stupid as you'd expect. The real loser here may be Intel, which claims a "powered by Intel" sponsorship credit but gets overwhelmed by the Microsoft/Cisco doohickey.

It's worth noting that Hulu commenters have already sussed out the product-placement angle. Meanwhile, a recent Wired article suggests that there's much, much more of this to come in the next 48 (!) episodes. Not good.

Beyond that, the chief sin of "Gemini Division" is that it is boring. "Blade Runner," "They Live" and tens of other filmed fictions have done the impostors-among-us thing far more engagingly, and the plotting, dialogue and acting all feel like an afterthought. I had trouble getting through the two six-minute episodes currently posted, so godspeed to any viewer who attempts to watch all 50 installments.