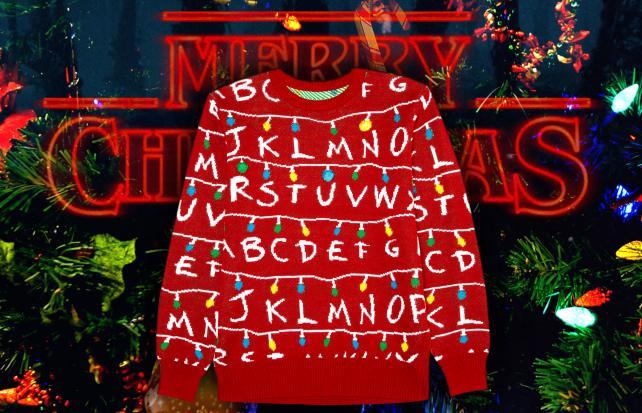 Reed Hastings is no fashion icon, but the Netflix chief executive's garb on a recent video presentation to investors is likely to start a hot new trend.

Grinning sheepishly, Hastings donned a Christmas sweater inspired by the hit show "Stranger Things." For $34.99 at Target, fans of the drama about middle schoolers confronting supernatural events can buy the red sweater with white letters and holiday lights. Netflix is betting more and more fans of its shows are going to want such options.

If "House of Cards" established Netflix as a home for premium TV and Emmy-winning "Master of None" provided bona fides as a prestige outlet, "Stranger Things" is the first sign Netflix dreams of being a multifaceted media empire. The streaming-video giant is releasing the second season of "Stranger Things" in 190 countries on Friday, but the push to make money from the show is just beginning.

In addition to the sweater, Netflix has struck deals for "Stranger Things" coffee mugs, action figurines and T-shirts at Hot Topic. The streaming service has also licensed three board games, including versions of Monopoly and Clue, and given the show the ultimate sign of a fan sensation in modern Hollywood: a talk show in which fans will discuss the latest episode.

The marketing onslaught is a far cry from two years ago, when Hastings wore an ugly sweater featuring the title character of "Bojack Horseman." That pullover was only available to attendees of a company holiday party.

"We're learning how to do merchandising," Hastings said this month on the webcast. "We've got some amazing displays and amazing materials out at Target."

Netflix has downplayed its ambitions in consumer products as little more than an experiment. Yet experiments at Netflix turn into priorities at the first sign of success. Just look at "Stranger Things" season one.

Every network in town rejected the initial script by Matt Duffer and Ross Duffer, who had written for the Fox TV show "Wayward Pines." Netflix at the time was viewed as a home for dark, gritty dramas rather than the childlike wonder of a show inspired by "The Goonies" and "E.T." Netflix decided to roll the dice anyway.

The Duffer brothers were concerned the show would be a failure when they didn't see any promotion ahead of the debut, they said at a screening earlier this year. What they didn't know was Netflix was waiting to see how fans responded before committing to spend additional money on marketing.

The global popularity of "Stranger Things" has inspired the company to hunt for family and science fiction shows with memorable characters or worlds that can live on in more forms. Netflix is developing "The Lunar Chronicles," the adaptation of a popular young adult franchise; "Chambers," a teen psychological thriller; and "The Witcher," based on the popular video game franchise.

Earlier this year, Netflix bought comic book publisher Millarworld, its first acquisition, to develop TV show and movie properties for fanboys and fangirls. And the company hired Jess Richardson, formerly of World Wrestling Entertainment, as its first executive in charge of licensing shows for books, comics and toys.

Potential new sources of revenue will boost Netflix in the eyes of investors and analysts, some of whom believe the company is spending too much money.

Though the company reported greater subscriber additions in its most recent quarter than analysts forecast, it also projected spending of $7 billion to $8 billion on programming next year. Netflix has been burning through cash and taking on debt to finance its ever-growing ambitions for original series.

Investors have previously cheered this spending so long as Netflix adds subscribers at a healthy clip. Opening up new sources of sales would reduce some of the pressure on the company to beat subscriber forecasts every quarter.

Walt Disney makes about half of its profits from TV, but it stands apart from its peers thanks to theme parks and toys. The company can justify paying $4 billion for Marvel Entertainment—and billions more on TV shows and movies inspired by the comic books—because the characters are ripe for exploitation beyond movie theaters and TV screens. Some of those shows, like "Daredevil" and "Luke Cage," live on Netflix.

"Licensing drives huge profits for creators of content," Silver said. "It's big for studios, networks and it really makes sense for Netflix to create content that has a lucrative back end." A single 10 percent to 12 percent royalty on a Netflix show-related board game could generate $2 million in sales from just a small staff of licensing experts, he said.

Netflix has a long way to go before it rivals Disney, but Hastings has already left an impression. Disney is pulling its movies off Netflix in 2019. Its Marvel TV shows will stay on the service a bit longer. By the time they leave, Netflix could have a comic book franchise of its own.