Ad Age/IPSOS Survey Finds We'd Rather Give Up Food Than Cable, Cellphone
READ THIS NEXT
ViacomCBS introduces digital ad platform

CHICAGO (AdAge.com) -- If you had to surrender your cable, your mobile phone or internet, which would you choose? Well, 8% of respondents in our exclusive AdAge/Ipsos Observer study were having none of it -- saying they would rather forgo eating than give up a media consumption device.

For those willing to play along, 49% said they'd lose cable, 37% said their mobile phone, and only 6% said internet. But that doesn't mean we'd be willing to swear off our favorite TV shows altogether: Nearly half of respondents said they would be willing to give up their cable or satellite to watch TV shows in another fashion (web, NetFlix, Wii, etc.). And, in fact, nearly one in four already watch this programming on a non-television platform "often or sometimes." The online survey of 1,000 U.S. consumers was conducted in mid-January. 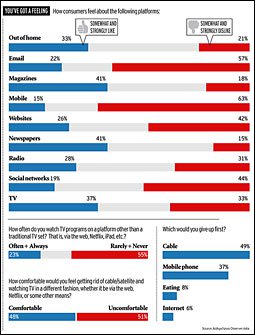 We still own a lot of TVs -- the percentage of owners has actually managed to increase in the last two years, according to Nielsen, and our survey found 18% of respondents consider themselves "likely" to buy a 3-D TV in the next 12 months. But there are those who don't own a TV and often define themselves by the fact, shoe-horning the detail into cocktail conversation within minutes.

"I've heard the anecdotal semi-brag about 'cutting the cord,' especially from the millennial audience," said Erin Matts, chief digital officer of Omnicom Media Group's OMD. Yet "actual data I've seen points to TV viewership going up. You can't ignore this, but it's not necessarily at the expense of traditional TV."

Our TV-viewing habits have changed in recent years as well. The survey found a third of households had a DVR-like device. Those households report that they watch an average of 42% of their TV from the DVR, including 17% who say they watch at least 80% of their shows after they air.

But here's the rub: While everyone is worried the DVR allows people to fast-forward though the ads (as 83% of survey respondents said they do,) our survey found that commercials on TV are least-disliked of any platform except newspapers. And we know how well that has worked out for newspapers.

According to the survey, platforms on which people least like to see advertising are the ones they are adopting fastest: Mobile (63% dislike or strongly dislike); email (57%); and social (44%).

So if people like ads most on the platforms they are most willing to give up, where does that leave us? "My phone is in my purse and I keep it with me. ... If I get an advertisement there on such a personal device, it has to be very relevant," said Ms. Matts.

Beyond relevancy, there's the pay problem. Some 44% of respondents claimed to subscribe to a local paper, and a similar number read a free local paper, although only 11% say it's their primary source of news. Overall, 75% said their preferred news source is traditional media, like TV or newsprint. For local online news, they find the best coverage on the sites of those outlets, but they're not willing to pay for it. If that outlet erected a pay wall, 83% said they would find another site to read their news.

Terry Gallaher, director-integrated media at NBC5 Chicago, said local TV has a big advantage even as specific device usage fragments. The station plans to roll out new content for iPhone, iPad, Android and other platforms. "We still have such a large core audience, and our audience and advertisers can reach NBC content in many ways."

Ms. Matts said the key will be finding the right "value exchange" for media sites and marketers. Whether it's a 30-second pre-roll on a full episode of content on Hulu or a well-targeted mobile message, there has to be some trade-off. "Journalism and content aren't free, and I think consumers realize that."

Tell that to cable subscribers. All the major cable and satellite providers are boosting rates for 2011, according to Bernstein Research, although many are posting smaller hikes than in 2010 in response to two quarters of declining subscriptions. Prices are still rising faster than the economy recovers, making it a logical place for consumers to make cuts.

That is, not if they're part of that 8% resigned to fork over to the cable company what they used to give Whole Foods.