What Medium Scores Highest ROI? It May Be Radio | Ad Age
Skip to main content

What Medium Scores Highest ROI? It May Be Radio 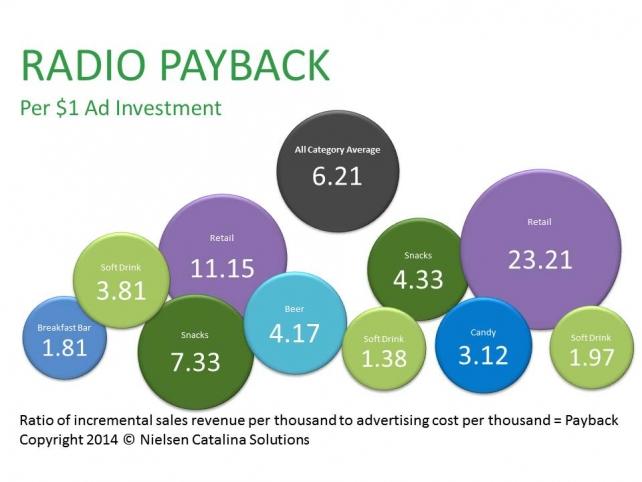 What's the best medium for delivering eye-popping return on investment? Strangely enough, it may be radio, at least in a study of 10 brands from last year.

Despite a recent flood of studies and marketer statements validating returns from Facebook and other digital media, radio beats most of those glowing digital ROI numbers in a study of 10 brands that advertised on Clear Channel stations. The study is from Nielsen Catalina Solutions, which combined data from Nielsen's newly acquired radio-audience measurement business with shopper-card data from Catalina.

Brands averaged a sales lift of more than $6 for every $1 spent on radio ads – an ROI double that of even the best results from many recent studies of digital or TV media, including one from France and Coca-Cola that Facebook recently touted. One retail brand delivered an almost unheard of $23.21 in sales lift for every $1 invested, though a soft drink brand at the low end of the range delivered a more pedestrian $1.38.

The study was presented at the Advertising Research Foundation's Re:Think 2014 conference in New York on Monday. Though it was sponsored by Clear Channel, "We didn't touch the data," said Radha Subramanyam, exec VP-insights, research and analytics of Clear Channel Media & Entertainment, which sponsored the research. "We let [Nielsen Catalina] do all the analysis."

The impetus behind the study was that the oldest electronic medium – radio – finds itself in the same predicament digital media faced years ago. Spending on radio campaigns is so small that results barely register in the econometric marketing-mix analyses many marketers use to measure ROI. Of course, digital spending has since risen to the point that its effects can more often be detected in marketing-mix models, while radio spending has been relatively flat or declining.

Kantar Media reported in December that third-quarter spending on local radio rose 0.4% while spending on national spot radio fell 8.5% and network radio plunged 23.7%, though that last decline was exaggerated by a reduction in programming tracked by Kantar.

The Nielsen Catalina analysis doesn't need big budgets to measure results, since it can glean ad exposure and purchases directly from households – a total of 14,000 in this case that had both their radio listening tracked with Portable People Meters and their retail purchases tracked by Catalina.

In one case, a snack food brand spent $1.5 million on radio to generate $10.8 million in added sales, a $7.18 ROI, but only 9% of category sales came from buyers who were exposed to the campaign, said Leslie Wood, chief research officer of Nielsen Catalina. Where radio had its biggest impact – retailer ads – it came because the people affected by the ads made multiple product purchases at the retailers.

"It's hard to take our averages and call it a norm," Ms. Wood said, and the question remains whether marketers would get similar results at higher spending levels or across more brands and categories. Still, she said, "These numbers are extremely high."

Ms. Subramanyam, who has worked in TV and digital media previously, said, "I have never seen such consistent delivery against advertising metrics and this kind of massive return on investment."

Ms. Wood said she was particularly surprised by the strong showing, though, because low-budget radio ads don't get as much creative pre-testing as TV. She believes one reason may be people's affinity with their radio stations, something media buyers in New York may have trouble believing.

"If you live in New York, you probably don't drive, so you may never listen to the radio," she said. "But the rest of the United States does. And it's shocking how connected people are to their radio."