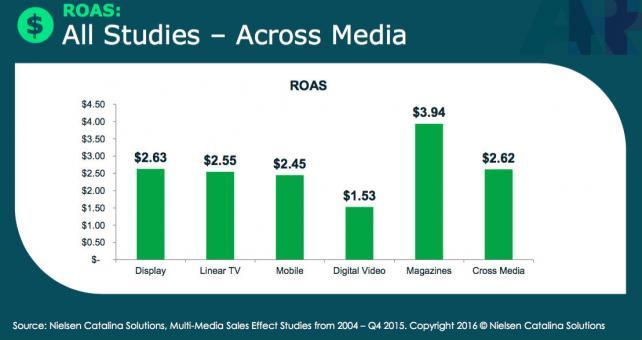 What medium delivers the biggest bang for the buck? A new study provides a definitive answer, at least for packaged goods, and it's probably not the one anyone expected.

Magazines deliver by far the best return on ad spending when compared to TV, digital display and video, mobile and cross-media campaigns, according to a study set to be presented today by Nielsen Catalina Solutions at the Advertising Research Foundation Audience Measurement 2016 Conference in New York. The medium delivering the lowest return in the study is digital video, arguably the hottest for CPG marketers and for much of the marketing world.

The study appears to be unprecedented in scope in terms of looking at norms for return on ad spending (ROAS) across multiple media -- albeit only for CPG. The conclusions are drawn from analysis of 1,400 research projects spanning more than a decade across 450 brands.

The projects have been commissioned since 2004 by a variety of media companies and brands, but unlike most such research wasn't backed by a single sponsor or industry. Nielsen Catalina is using the term ROAS rather than the more commonly used return on investment (ROI) to help indicate that the results measure only incremental sales impact per dollar of advertising spent, not profit impact. 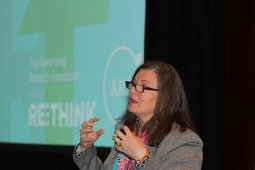 Nielsen Catalina Chief Research Officer Leslie Wood was quick to point out that the differences between magazines and digital video were all about pricing. Magazines had the lowest cost per thousand impressions (CPM) in the study, and digital video the highest. Magazine audiences in the study were bolstered by inclusion of secondary audiences -- the pass-along readership that occurs everywhere from doctors' offices to friends' homes.

"Everybody wants to be in digital video," Ms. Wood said. "There is very little inventory, so the price is high. It's the reverse in magazines, which are undervalued in the marketplace."

That cost data for all media came directly from either media companies or brands, so it reflects actual spending, not estimates, Ms. Wood said. 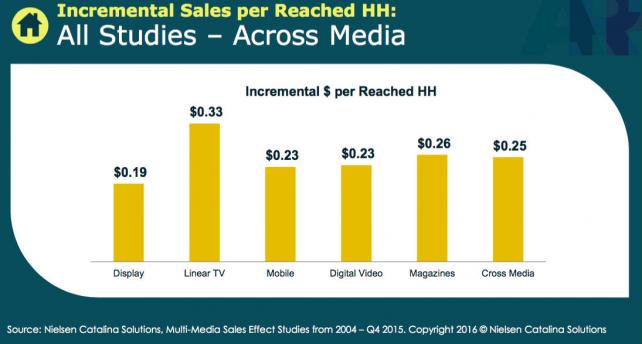 Increase in sales per household in Nielsen Catalina Solutions study.

In terms of sales impact per thousand consumers reached, mobile fared best. But that was based on the relatively low reach of mobile -- which on average reached only 2% of consumers in the study -- so it had almost none of the diminishing returns that come from reaching the same people multiple times, like other media, Ms. Wood said.

Nielsen Catalina bases its research on audience-measurement panels of Nielsen and other partners with sales data from shopper loyalty programs collected by Catalina -- matching the same households to measure what media they saw and what they bought.

The study only covers CPG, and deeper analysis suggests media effectiveness may differ for other categories, because it even differs within CPG categories and brands. Big, high-market-share brands purchased frequently had the highest returns on media spending. Brands with smaller market shares or purchased infrequently had lower returns.

Some of the online display studies compiled for the research date to 2004, while measurement of other media types is more recent, with online video since 2007, TV since 2008, magazines since 2011 and cross-media studies since 2013.

To test whether effectiveness of TV, magazines or digital media had changed over time, Nielsen also compared media year by year -- meaning it looked at studies across all media only for 2013, 2014 and 2015 -- and found no meaningful trends in effectiveness, Ms. Wood said. Overall ROAS is lower in the NCS database since 2011, but that has to do more with the composition of brands and media types in the studies -- for example more small brands and more campaigns with digital video dragging down the average -- than with decline in overall media effectiveness, she said.

The study had no way of looking at the impact of creative effectiveness separately from media placement. But NCS did look at impact of different creative types, with ads featuring promotional appeals or coupons generally delivering higher returns than other types of ads.

Ms. Wood expects lively debate as various media groups look to turn the findings to their advantage. The data may suggest that magazines are undervalued and digital video overvalued. But will marketers defy trends by shifting funds back from one of the hottest media of recent years to one that's seen steady declines?

"If what I do changes behavior, I'd be thrilled," Ms. Wood said. "That's certainly the takeaway, that there are opportunities here to be looked at."

Much of the money that's been chasing digital video and driving up its CPMs has been driven by the search to find millennial and Gen Z audiences that have gotten harder to reach with conventional TV or magazines. But regardless of the demographics, the Nielsen Catalina data suggest there's plenty of sales impact to be had from older media.

One of the more surprising findings to Ms. Wood was the resilience of TV.

"What's interesting to me is that this happens at the scale that these media have," she said. TV has "dramatically higher reach" than the other media, averaging 57% of audiences in the Nielsen Catalina study vs. an average of 35% for campaigns overall and less than 10% for digital media, including only 2% for mobile. "Reach is expensive," Ms. Wood said. "So it's interesting that no matter how high its reach is, linear TV does a tremendous job of driving sales."

The study is in line with findings from another study released earlier this year by IRI and backed by Turner Broadcasting across 62 CPG brands representing $3 billion in annual media spending. IRI found TV return on investment has remained steady the past five years, despite challenges facing the medium, and that it generally was better than digital. As with Nielsen Catalina, IRI found big brands with high household penetration got by far the best return. 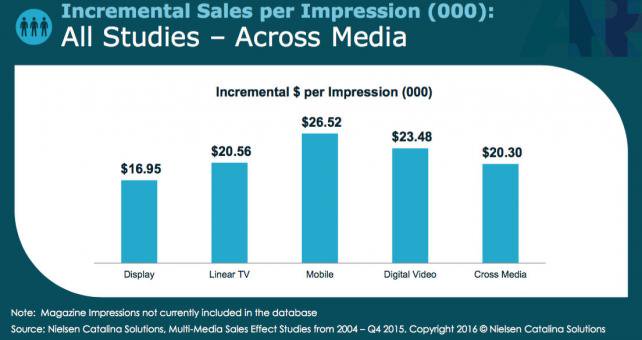