NEW YORK (AdAge.com) -- OK magazine has switched public relations agencies from the firm it employed since launch to one with many more celebrity relationships, underscoring just how mutually beneficial the right partners can be. 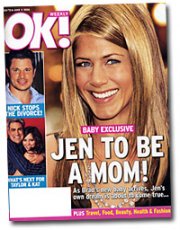 'OK' hopes Rogers & Cowan's other clients, like Tom Cruise, will give the celebrity tabloid better access now that the shop represents them both.
The magazine named Rogers & Cowan its new press representative, partly in the hope that its celebrity clients, who include models and actors such as Tom Cruise, will mean more access to the world of fame. Rogers & Cowan picked up the account from Harrison & Shriftman, which is better known for corporate clients in fashion, lifestyle and entertainment.

Won a review
Rogers & Cowan won a review for OK's business, said Christian Toksvig, CEO of OK magazine in the U.S. "It was a very strong pitch that they represent so many of the people that we want to cover," he said. "Independent of that," he added, "they're a great agency, a very respected agency."

American Media's Star and Bauer Publishing's In Touch Weekly and Life & Style Weekly don't use celebrity-studded PR agencies, but Us Weekly from Wenner Media has Dan Klores Communications looking out for it -- as well as stars from Jessica Simpson to Sean "Diddy" Combs.

The 500,000 mark
OK's June 5 issue, with a cover about Jennifer Aniston's baby plans, is likely to be the first to crack 500,000 newsstand sales, Mr. Toksvig predicts. The title has improved sales since early stumbles with a redesign and a cover-price promotion that has lingered beyond its initially planned duration.

The title also remains in the running for exclusive photos of Angelina Jolie and Brad Pitt's newborn, Mr. Toksvig said. Its first publisher's statement to the Audit Bureau of Circulations comes out this summer.