A tale of two impeachments, continued 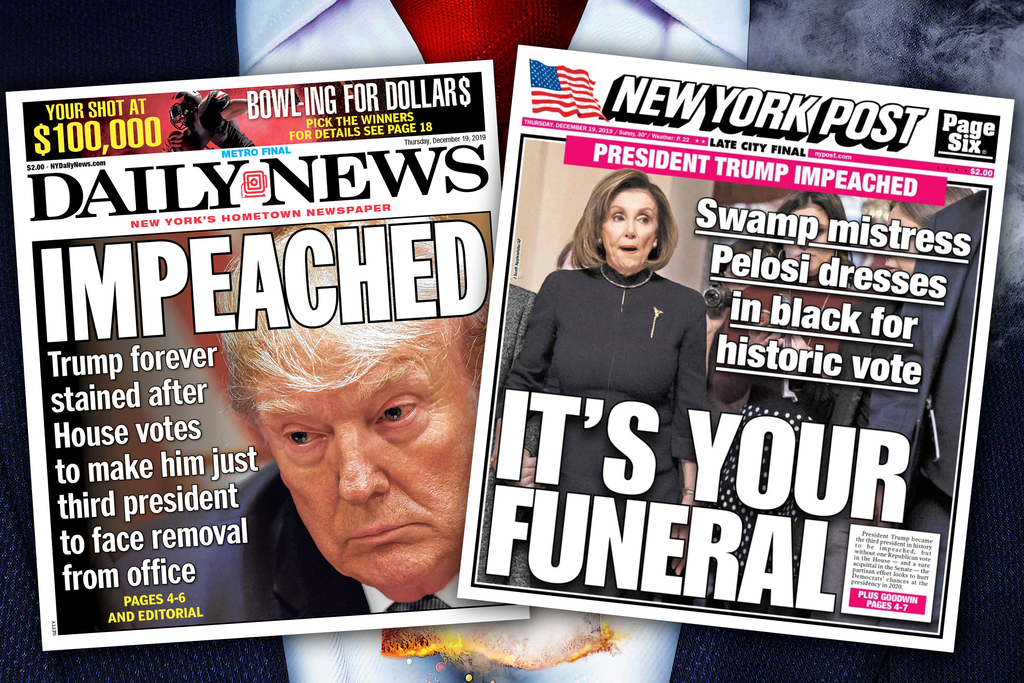 As part of Ad Age’s continuing media-about-media coverage, a quick glance at how America’s two leading tabloid newspapers are covering the impeachment of President Donald Trump.

Back in September, at the start the impeachment inquiry in the U.S. House of Representatives, we published a post headlined “A tale of two impeachments,” comparing and contrasting front-page coverage from the New York Daily News and the New York Post. Those papers, with their opposing political points of view, typically serve as barometers of how other media across the land will spin any given D.C.-related narrative.

The divide is even more stark today. The left-leaning, Tribune-owned News goes with a simple banner headline—“IMPEACHED”—and a subhead that pairs with a somber POTUS photo: “Trump forever stained after House votes to make him just third president to face removal from office.” The right-leaning, Murdoch-controlled Post, meanwhile, doesn’t even show Trump, instead serving up an awkward photo of Speaker of the House Nancy Pelosi under the headline “IT’S YOUR FUNERAL” and the subhead “Swamp mistress Pelosi dresses in black for historic vote” along with a smaller “PRESIDENT TRUMP IMPEACHED” tag up top.

As we’ve said before, we all just need to brace ourselves for more—weeks more, months more, a lifetime more—of this kind of bifurcated coverage.