For readers adjusting to strange encounters with online political news, both real and fake, one established publication has managed to do more than its share of the unexpected in this election year. "Somehow Teen Vogue managed to perform actual journalism AND sell overpriced satin rompers," reads a typical Twitter message from a excitable reader. "AT THE SAME DAMN TIME." 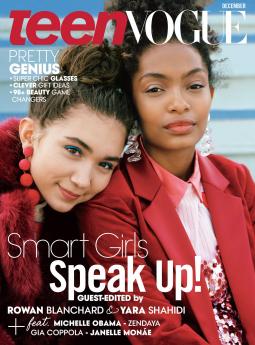 Yes, the youth-friendly extension of a century-old fashion and society magazine launched by Condé Montrose Nast himself has somehow become a stalwart of trenchant political writing, taking on topics that defy the shallow stereotypes of a teenage magazine. Recent articles have chronicled student protests, disability activists and Vice President-elect Mike Pence's stance on conversion therapy, not to mention introducing the concept of gaslighting into President-elect Donald Trump's transition.

Nearly two years ago, when Mr. Picardi joined the magazine's digital staff, Teen Vogue online was turning out a steady stream of glossy fashion spreads and beauty coverage that reflected the magazine print edition. In an effort to reflect the full range of interests of its core 18-to-24-year-old female readership, the website shifted away from this exclusive focus on lifestyle and celebrity and began working with young journalists who came from hard news backgrounds.

"We have been correcting the notion that Teen Vogue wouldn't cover this issue," Mr. Picardi, 25, said in a phone interview. "You can care about what you wear, shopping, what kind of lipstick and foundation you're wearing . . . and also you can want to know what's happening in the headlines. Those two things can co-exist peacefully."

This week, in an example of that range, Teen Vogue's home page includes stories about transgender discrimination, a roundup of Golden Globe nominees, prison visitation policies and five tips for building a gingerbread house. "We don't report on every single news piece like a newspaper does," Mr. Picardi said. "So when we do cover something, we cover it from the point of view of a young person. We want to be a resource for them."

Many story ideas are generated by monitoring Teen Vogue readers on social media. "That has such a huge impact on our work," said Terron Moore, the publication's social media director. A comment replying to a story about a makeup trend is taken as seriously as a response to a protest piece. "One of my favorite memes is 'Get you a brand who can do both,'" he said. "We're not afraid to be really excited about both."

The shift to more hard-news coverage, alongside an increase in content output, has paid off. Between April 2015 and this past November, traffic to Teen Vogue jumped from 2.5 million monthly unique visitors to 9.4 million, according to the magazine.

"More than ever we must understand that our reader is multifaceted and is looking to arm herself with as much information as possible," Vogue editor-in-chief Anna Wintour said in a statement, praising Teen Vogue's digital coverage.

The digital traffic boon comes at a time when print publications are suffering, losing both subscribers and esteem. Condé Nast, Teen Vogue's parent company, recently reduced the print magazine to a quarterly publication schedule, down from nine issues in 2016 and 10 a year from 2004 to 2015.

Teen Vogue could well exceed November's surging web audience in December after an opinion piece, "Donald Trump Is Gaslighting America," generated more than a million unique visitors and the attention of publications worldwide. It's the site's best-performing piece of all time, unseating "How to Apply Glitter Nail Polish the Right Way."

Did not expect this exegesis of gaslighting and its relationship to current day politics from Teen Vogue https://t.co/cwNhZ6wvJH

David Folkenflik, the National Public Radio media correspondent, was surprised to see this kind of coverage "from a publication with the title 'Teen,'" he said after posting the story to Twitter. He added: "Teen Woke."

Despite the continuous wave of surprise, this kind of coverage is neither new to Teen Vogue nor to the women's magazine world as a whole. Glamour created a special section of its website, "The 51 Million," specifically for election coverage; the name refers to the number of women under the age of 45 who are eligible to vote in the U.S. The history of women's magazines doing groundbreaking hard-news journalism goes back at least to WWII, when Lee Miller, a model-turned-war correspondent, sent photographs of the concentration camps to Vogue for publication.

There's little doubt that the political stories coming out of Teen Vogue can be even more popular than models and makeup. A recent series on the Standing Rock protests, "Ask a Native American Girl," generated more than 8 million views on Facebook. And the print magazine hardly shies away from politics: December's cover story is an interview of First Lady Michelle Obama by 20-year-old actress Zendaya Coleman.

"I don't like this idea that you can't cover the news and cover the Kardashians," Mr. Picardi said. "The idea that girls can't be smart and also care about fashion is, frankly, damaging."