TV Crime Does Pay -- the More Complex the Better

NEW YORK (AdAge.com) -- When Robert and Michelle King pitched the original concept for "The Good Wife" to CBS in 2008, the two co-creators envisioned the popular drama as a "hybrid" show, said Ms. King. Part would be devoted to storylines about the characters, and part to the stuff that has become so familiar on CBS's airwaves: the "procedural," that venerable drama in which police, doctors or lawyers solve a crime, case or medical mystery in one episode's time, come hell or high water. 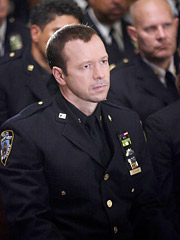 'Blue Bloods'
Credit:
Craig Blankenhorn/CBS
Yet CBS asked for an intriguing tweak: Place heavier emphasis on the characters. "We were willing to take this in a direction where it was more strongly procedural, and they were the ones who pushed it in this direction," said Mr. King.

CBS, the network often accused of hooking the country on by-the-numbers procedurals that entertain the masses but don't always garner critical acclaim, has quietly been infusing its dramas with a new formula. Rather than continue to launch "just-the-facts" crime-solvers, CBS has rolled out two programs -- "The Good Wife" last season and "Blue Bloods" in this one -- containing plotlines that require several episodes to resolve; characters with exceedingly complex pedigrees; and enigmatic elements that hint at looming conspiracies.

In "Blue Bloods," for instance, actor Donnie Wahlberg's detective character solves a case in nearly every airing, but the show for weeks has teased the existence of a secret society known as "The Blue Templar" without letting audiences know much about the enigmatic organization. A legal case is resolved in each hour of "The Good Wife," but the show is filled with richly drawn characters as well as the saga of an ongoing political campaign.

"We've gone from an era where the story and the procedural drove the series, and then evolved," said Christina Davis, senior VP-drama series development at CBS Entertainment. These days, "the story is the engine but the characters drive the car," she added. 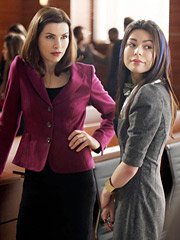 'The Good Wife'
CBS's maneuver isn't without risk. Advertisers have come to depend on procedurals -- easy for TV viewers to watch any week they choose, without having to follow a show episode by episode -- to bring in the mass audiences they need to buy their goods. Add too many layers of complexity, and the show could turn off all but its most earnest fans (hurting its chances for syndicated and international distribution). Keep it too simple, and the program will resemble any number of procedurals stuffing the prime-time grid on both broadcast and cable.

And yet, the format has to allow for more distinction if networks are going to keep snaring audiences constantly distracted by new forms of digital media. "How many crime shows are there and how similar do they all start to look?" asked Susan Mackey-Kallis, an associate professor of communication at Villanova University. "It's time for the genre to reinvent itself or die."

TV finances may be behind the effort. Marketers are paying for TV based on the number of viewers who watch commercials as many as three days later on a digital video-recorder. Because scripted drama is the most popular genre among people who own DVRs, networks "have got a lot of incentive," said David Scardino, entertainment specialist at independent ad agency RPA, to make procedurals "more complex and more interesting and more likely to hold viewers of a show."

For many years, the opposite has been true. The success of the procedural hinges on the characters' ability to close a case, not fall in love or give a rousing monologue. The shows are supposed to lure viewers who want easy grazing: basic storytelling without a lot of the fuss that comes with slow-moving plots and ornate characterization.

Breaking down the genre's conventions is tough. At "Law & Order," producers and writers sometimes experimented with extended storylines and tales focused on specific characters, said Rene Balcer, executive producer of "Law & Order" and now "Law & Order: Los Angeles." But fans have certain expectations. When producers ran an episode of the original "L&O" featuring the characters watching an execution and then reacting to it, some viewers scratched their heads, Mr. Balcer said. "In many ways, it was a groundbreaking episode," he recounted. Yet "many of our fans were very confused: 'Where's the story?' Television is in many ways a medium of habits."

Procedurals have a rich boob-tube history. As NBC built its massive "Law & Order" franchise and CBS returned fire with its series of "CSI" shows, prime-time has grown clogged with hour-long dramas that magically resolve everything just before the 60-minute mark. These days, elements of the procedural have taken root everywhere, from Fox's "Bones" to TNT's "The Closer" to ABC's "Detroit 1-8-7."

The format has become hard-wired into CBS's identity, helping inform everything from the now-defunct "Cold Case" to the rapid-fire "Hawaii Five-0." The programs are predictable, but there's no denying their reliable performance. At CBS, "Blue Bloods" and "The Good Wife" are among the top 20 most-watched shows on broadcast TV season to date as of November 10, according to Nielsen, though they fall much lower on the list in the category of most-watched by viewers between the ages of 18 and 49 -- advertisers' favorite demographic.

Lately, CBS has been eager to tinker with the genre's limitations, according to producers. When TV veteran Leonard Goldberg pitched "Blue Bloods," a cop show with a strong emphasis on family relationships, he recalled CBS Entertainment President Nina Tassler telling him, "'This is a new format that will take us a step away from the pure procedural." A CBS spokesman confirmed the conversation. "She saw it immediately as something that would please the CBS audience, but give them something new," Mr. Goldberg remembered.

CBS isn't tilling new ground. Past couch-potato favorites leaned heavily on the complex -- and drew a good crowd, too. "Hill Street Blues" and "St. Elsewhere" on NBC relied on multiple ongoing storylines. Walt Disney's ABC has also tried to bust the procedural wide open in recent seasons, with mixed results. On "Pushing Daisies," a character who could bring the dead back to life used that talent to solve a murder each week, but the ornate back story -- and a writers' strike -- made the show difficult to follow. In its last season, "Law & Order" featured a season-long storyline about one of the characters grappling with cancer.

Complexity has not been king, however, in the recent past. Serial dramas with complex elements -- think "Alias," "Lost" or "24" -- tend to see ratings wane over the long haul, even though a core group remains engaged.

Mr. Goldberg, who has produced TV favorites ranging from "The Rookies" to "Family" and "Starsky and Hutch," and sits on CBS Corp.'s board of directors, senses a slight change in what audiences want. "The reactions we get from the little research done so far, they love the family stuff," he said of "Blue Bloods" viewers.