Despite Chain's Deep Involvement in NBC Comedy, Traditional Network Model Still Applies
READ THIS NEXT
How TikTok, Instagram and Snapchat sell everything from ranch dressing to lip gloss

LAS VEGAS (AdAge.com) -- When nerdy Chuck Bartowski, the character at the center of NBC's comedic spy-serial "Chuck," returns to the airwaves Jan. 10 for a special premiere, he will do so thanks in part to the financial generosity of Subway Restaurants. Last year, the sandwich chain agreed to earmark support for the ratings-challenged program rather than see NBC pull it off the air. 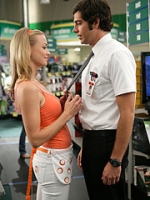 Witness the sandwich chain's plan: Subway commercials will run during "Chuck," some Subway mentions are likely to occur in certain episodes and Subway is already promoting the hour-long show in its restaurants and in a print ad that ran this week in USA Today.

Sounds like a clever blueprint that any advertiser would love to emulate. And yet, Subway's chief marketing executive believes this recipe is one not easily duplicated.

"The degree of difficulty to make this work is really high," said Tony Pace, chief marketing officer of the Subway Franchisee Advertising Fund Trust, the organization that orchestrates the sandwich chain's marketing and advertising.

Indeed, recent history bears him out. As much as advertisers say they want to establish deep alliances with individual programs, focusing less on buying across TV networks and more on specific shows that bring in the most likely audiences to sample their goods and services, the old rules simply aren't giving way as quickly as some might like.

Subway is largely able to do so much with "Chuck" (which will air regularly Monday nights) because -- no surprise -- it has a larger relationship with NBC, said Mr. Pace. Under that pact, Subway advertises on programs including "Late Night with Jimmy Fallon," "Sunday Night Football," "Chuck" and "The Biggest Loser," and has its marketing messages woven into the shows in exchange for its financial commitment to the network and an agreement to promote those programs with its own advertising and in its own stores. Subway spent about $34.4 million on NBC in 2008, according to TNS Media Intelligence, and has spent about $19.5 million through November of this year.

TV networks have seemed more willing to break old conventions in recent years, but their experiments don't always bear fruit. Last season, Fox tried running fewer ads in select programs and charging advertisers more for the privilege of having less clutter surrounding their messages. The technique -- known as "Remote-Free TV" -- has only been available in more limited fashion since Fox executives determined the idea was "tough economically" to make work on a week-by-week basis.

For its part, NBC has pushed the envelope often over the last few years, helping advertisers ranging from American Express to Honda craft promotions that tie in to particular programs (placements of Nissan cars in "Heroes") to special moments (Home Depot-sponsored weather forecasts tied to weekend activity). The idea has long been that putting these techniques into place helps the network develop stronger ties with different ad clients and deeper overall relationships.

"There are always different demands on commercial inventory and different shows," said Jim Hoffman, senior VP-sales and marketing, network entertainment group at NBC Universal, but there isn't any "one size fits all" approach to handling requests. Building broader integrations can often take several months of work, he said.

There is still clamor for clever show-specific marketing -- particularly as traditional time-and-day viewership for TV programming dwindles. Left behind are audiences that may be fewer in number, but are easier to target because they are more like-minded.

"Sponsored programs used to proliferate on both TV and radio. The old western TV show, 'Twenty Mule Team Borax' [sponsored by Borax] provides a good example. To boost his floundering acting career, Ronald Reagan became the sponsor's spokesperson on the program for a paycheck," recalled George T. Haley, professor of marketing and director of the Center for International Industry Competitiveness at University of New Haven. There's little reason why more of this type of alliance couldn't be crafted, he suggested.

Another academic thinks too much of one sponsor in a single show may push viewers away. "It's asking a lot," said Jay Newell, an associate professor in Iowa State University's Greenlee School of Journalism and Communication, speaking about Subway's "Chuck" alliance. "The in-store tie-in is dependent on people liking the show and on the writers' ability to not only enhance the Subway brand but to do so in a way that doesn't damage the show. And all the while, the show has to attract an audience that's not ever going to be there for the tie-ins."

Subway's ties with "Chuck" have already generated buzz and controversy. Rather than simply put a sandwich or a logo on screen, Mr. Pace has pushed to weave marketing messages properly into the program, a technique that resulted last season in one of the main characters on "Chuck" more or less repeating Subway's jingle about its "$5 footlong" sandwiches. "Some people would say it was too obvious, but I was comfortable with it," he said. Even so, he added, the longer-term relationship with "Chuck" means Subway and the show's producers can keep learning as they go along and refine their methods.

The proof may well be in the ratings. Mr. Pace said he has been impressed by NBC's promotion of the show and expects to push for the "Chuck" premiere as well as in the months ahead. Still, if "Chuck" doesn't turn in a better performance over the next several weeks, even Subway's marketing dollars aren't likely to save it.