Was 'Lost' Finale an Event?

NEW YORK (AdAge.com) -- The final episode of "Lost" was extra-long and attempted to sew up myriad loose plot strands with an emotionally complex denouement. But it still didn't come close to snaring an audience on par with a regular episode of "NCIS." 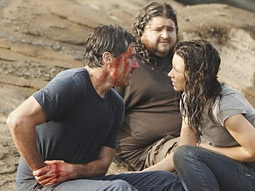 But maybe that's the new TV: "Events" that aren't on par with those of yesteryear. ABC's broadcast of the last episode of "Lost" snared approximately 13.5 million viewers overall, according to preliminary figures from Nielsen, with the Disney network seeking between $850,000 and $950,000 for a 30-second spot in the broadcast.

The finale's audience numbers aren't on par with the 19.2 million people who watched ABC's own "Dancing With the Stars" in the week ended May 16, or the 17.2 million who tuned in that week to watch "NCIS" on CBS.

In some ways, the show was a success. The finale's audience trumped that of the series during the regular broadcasting season. The episode of "Lost" broadcast during the week ended May 16 reached approximately 10.3 million people, according to Nielsen. And ABC said about 9.8 million people tuned in to watch a two-hour "recap" show between 7 p.m. and 9 p.m. ET.

Yet by another fashion, the level of the program's audience serves up an interesting TV truth: Advertisers seem willing to fork over high prices for audiences that may not be the TV industry's biggest, but may well be among its most intensely interested. Indeed, at 13.5 million the viewership of the "Lost" finale is decidedly wan compared with the crowds that tuned in to see the series finale of "Seinfeld" (76.3 million viewers) or "Friends" (52.5 million viewers).

With TV viewers drawn to new means of consuming video entertainment -- think video-sharing sites, iTunes downloads or DVR playback -- it's no surprise that programs which may have snared tens of millions of viewers just a decade or so ago now bring in a little more than 10 million.

ABC clearly went out of its way to accommodate certain advertisers. During the pre-show, Verizon sponsored promotional segments surfacing during ad breaks that featured remarks about "Lost" from loyal fans -- and inserted them into scenes of the show that portrayed characters reading. During the finale itself, Target ran several ads that played off storylines from the popular program. One commercial showed the famous "smoke monster" breaking up an island camp, then a reminder that a smoke detector at Target only costs $10.99.

Whether the "Lost" finale numbers constitute a TV event is a subject for debate. The networks provide more fodder for the argument Monday evening when Fox shows a two-hour series finale for "24" and NBC broadcasts a two-hour season finale for "Chuck."