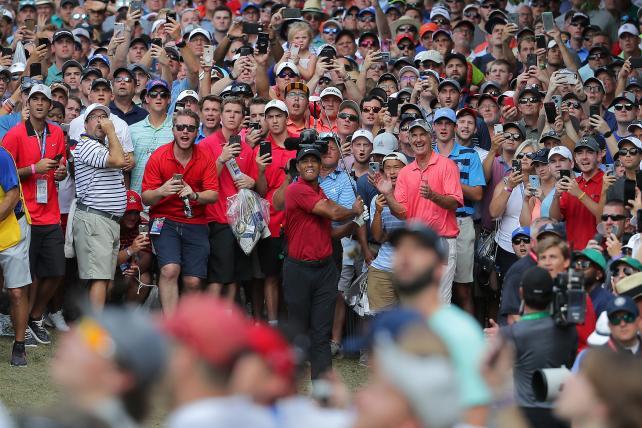 Tiger Woods plays a shot on the ninth hole during the final round of the PGA Championship at Bellerive Country Club on Sunday in St Louis, Missouri.
Credit: Richard Heathcote/Getty Images

Tiger Woods on Sunday may not have been able to secure his fifteenth major golf championship, but his ferocious run in the final round of the 100th PGA Championship was a declaration that the sport's most indomitable performer is back—even if he couldn't seem to find the fairway. And as one may well imagine, Tiger's improbable run in St. Louis proved to be a godsend for CBS.

According to Nielsen live-plus-same-day data, CBS's final-round coverage of the tournament averaged 8.47 million viewers and a 5.4 household rating, making it the most-watched, highest-rated PGA Championship broadcast since 2009, when the network averaged 10.1 million viewers and a 6.6 household rating. In terms of more immediate comparisons, the Sunday deliveries marked a 73 percent improvement over last year's average draw (4.91 million viewers) and a 69 percent gain versus the year-ago 3.2 rating.

Much like the full-throated horde that stalked Tiger as he worked his way through the back nine, the TV audience swelled as the afternoon wore on. As Woods birdied the 18th hole to finish two strokes behind a lethal Brooks Koepka, some 12.3 million viewers were riveted to the action.

Woods' 64-stroke offensive at Bellerive now stands as his lowest score in a final round of a major. It was a particularly impressive showing considering that he didn't hit a single fairway on the front nine … and that he began the season trying to reconstruct his swing in the wake of an April 2017 spinal-fusion procedure—his fourth back surgery in as many years.

"Oh, God, I didn't even know if I was ever going to play golf again," Woods said in a post-round press conference. "I'm in uncharted territory because no one's ever had a fused spine, hitting it like I'm hitting it. So I had to kind of figure this out on my own and it's been really hard. It's a lot harder than people think."

Koepka, who has won three of the last six majors he's played—he sat out this year's Masters with a wrist injury—said the distant roars he heard throughout the day served to push him to step up his game. "Other than me, my team, everybody was rooting for Tiger," Koepka laughed. "As they should. You know, he's probably the greatest player to ever play the game, and to have the comeback that he's having—it's incredible."

This marked the second time in a matter of weeks that a late run by the 42-year-old Woods translated to a significant boost in the ratings. On July 22, NBC's coverage of the final round of the British Open posted that tourney's highest deliveries since 2000. When Tiger Woods is decked out in his Sunday red and moving up the leaderboard—he finished the Open just three strokes off the lead behind Italy's Francisco Molinari—broadcasters and advertisers reap the rewards.

Among the marketers who benefited most from the so-called "Tiger Effect" were Citi, National Car Rental, Brighthouse Financial, Progressive, Exxon Mobil, Crown Royal, Fidelity Investments and Chrysler's Ram Trucks. According to iSpot.tv data, Citi racked up some 62.4 million impressions during Sunday's round, which works out to a CPM of $12.81. If Tiger Woods is in the running next May, when the PGA Championship moves to Bethpage Black, that sort of discount will be much harder to come by.

Of course, no brand gets more mileage out of a Tiger run than Nike. While other companies like Gatorade, AT&T and Accenture quickly cut ties with the embattled duffer in the wake of his 2009 sex scandal, Nike was steadfast in its unequivocal support of Woods. In standing by its man (Nike first signed Woods in 1996), the swoosh earns billions of commercial-free media impressions and effectively basks in his refracted glory.