Publishers' NewFronts Presentation Promises Live Events Coverage, Celebrity and New Series
READ THIS NEXT
NBCU looks to deliver brands the scale of traditional TV in streaming, but with a twist 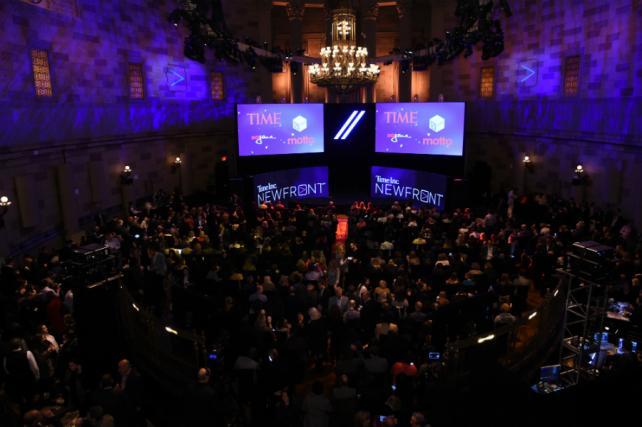 While the marketplace is becoming a bit crowded, Time Inc. still sees so-called over-the-top platforms, which deliver video programming without going through the cable box, as "a significant opportunity, especially from an advertising perspective," Rich Batista, exec VP at Time Inc., said at the company's NewFronts event.

The People/Entertainment Network will feature series, specials and live-event coverage, with an emphasis on long-form programming around pop culture and celebrity, according to Time Inc., although further details aren't available yet.

Time Inc. CEO Joe Ripp had said on the company's fourth-quarter 2015 earnings call that the company was exploring such a service.

The company is also starting an all-video mobile channel dedicated to "the new famous," such as social media stars and video creators, that's expected to arrive later this year.

Virtual reality has also been a staple of the 2016 NewFronts, and Time Inc., which had a "VR lounge" adjacent to the room where Thursday's presentation was held, announced that the Life brand will be "the centerpiece" of the company's VR efforts.

Time Inc. Chief Revenue Officer Mark Ford tried to set the company apart from its rivals by telling the audience of ad buyers that being able to distribute content is "table stakes."

"But really what matters is the big idea, and we have the people to deliver that idea," Mr. Ford said.

Earlier Thursday, Time Inc. reported a 1% year-over-year increase in revenue for the first quarter of 2016. "Declines in print and other advertising revenues and in circulation revenues were partially offset by growth in digital advertising revenues," the company said.