Time Inc., bracing for a spin-off from Time Warner early next year, is rolling out an ad product called Time Engage that's designed to use the company's vast reader data to better target ads not just in digital media but in print. 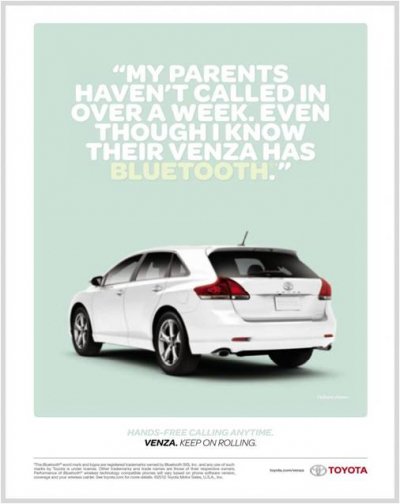 A Toyota Venza ad that appeared in Time Inc. titles

Johnson & Johnson has recently signed on for Engage, which began as a pilot program in 2012, and Time Inc. is looking for other takers.

The pilot last year saw Toyota, one of Time Inc.'s 10 biggest advertisers, and its agency Saatchi LA try to use Engage to raise awareness of its Venza cross-over among baby boomers, according to the companies.

The effort combined data on more than 137 million Time Inc. print, web and mobile readers that Time Inc. derived from third-party sources, some of which included the use of cookies, with information Toyota and Saatchi have collected on the automaker's consumers. Time Inc. used this third-party data to build models that helped identify who fit into the active boomer category and on which Time Inc. title and platform to best reach them, a Time Inc. spokeswoman said.

"It's a whole new connection that's within the psyche of our customer," Ms. Colvin said.

That Toyota data helped Time Inc. find contextually relevant places to run Venza ads than merely, say, near food editorial, according to the companies. Online this might mean putting an ad against a specific piece of content -- even breaking news -- that seemed likely to increase awareness for the Venza among likely buyers. It print, a Venza ad ran in Cooking Light near a story on American caviar manufacturers.

"When you think about that topic it caters to a more upscale, active baby boomer," said Caryn Klein, VP-research and insights at Time Inc. "So instead of placing it against an article on cooking the next salad dish for the summer, it went alongside more of an intellectual article on caviar. It was more upscale, even though it was in a title that you might not have expected that article to appear."

Magazine publishers are increasingly building ad platforms that draw on print subscriber data. Conde Nast, the publisher of magazines such as Vogue and GQ, described a program in March called Catalyst, which it said would help advertisers target web ads at audience segments such as moms or millennials. Other publishers -- including Meredith and Rodale -- also use subscriber data to target ads on the web.

Time Inc. described its move towards the Engage product as a natural progression. "We know so much about our consumer," Ms. Klein said. "Now how can we maximize that for our advertisers?"

John Lisko, executive communications director at Saatchi LA, described Time Inc.'s Engage as an extreme version of online ad networks, which deliver a demographic with certain content filters. "It had the overlay of much deeper lifestyle information than just general demographics," he said.

Ms. Klein said Time Inc. was continuously measuring the results of the ads in order to adjust the placement and swap out the creative during the campaign.

The campaign boosted awareness around Venza five times more than a typical automotive campaign, according to Toyota and Time Inc., both of which declined to disclose the price of the campaign. "It's a significant amount of media that has to be purchased," Ms. Klein said.