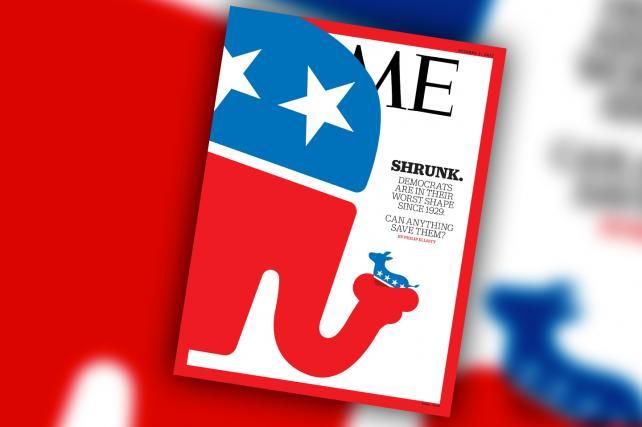 As natural disasters continue to dominate the headlines, new Time Editor-in-Chief Edward Felsenthal has decided to engage in an interesting bit of counterprogramming: He's put a man-made disaster—the Democratic Party—on his first cover, dated Oct. 2. (An animated version of the cover, which shows a giant GOP elephant looming over a shrunken Democratic donkey, has been released on Time's social channels; see below.)

In theory, Philip Elliot writes in the cover story, "the Democratic Party has been united and energized by its shared disgust for Trump." But Elliot argues that the party continues to neglect the heartland voters Trump successfully courted, and he lays out the numbers behind the party's crisis:

Now, eight months into the Trump presidency, the party looks to face its toughest odds since Ronald Reagan won 49 states in 1984. The Democrats are in their deepest congressional rut since the class of 1946 was elected, and hold the fewest governors' mansions—15—since 1922. Of the 98 partisan legislatures in the U.S., Republicans control 67. During Barack Obama's presidency, Democrats lost 970 seats in state legislatures, leaving the party's bench almost bare. The median age of their congressional leadership is 67, and many of the obvious early presidential front runners will be in their 70s by the 2020 election.

In other words, basic math suggests that Democrats are not going to be able to campaign/market their way out of the mess they're in anytime soon.