Subscription and Ad Revenue Both Up at Time Inc.
READ THIS NEXT
Chef Marcus Samuelsson on guest-editing Bon Appétit’s holiday issue

Time Warner CEO Jeff Bewkes said the company is also making progress on new digital platforms. "HBO GO debuted on mobile devices in May to a great response," he said. "Last month, CNN and HLN added live-streaming functionality to their mobile apps, which have now been downloaded more than 10 million times. And the acquisition in May of Flixster underscores our commitment to accelerate the digital transition of home entertainment and make it much more compelling for consumers to own digital movies." 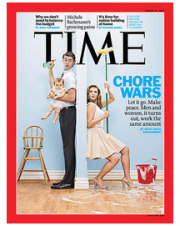 Revenue climbed 10% to $7.03 billion, compared with analysts' average estimate of $6.82 billion. Sales at the networks business, which includes cable channels TNT, TBS, HBO and Cartoon Network, rose 8.9% to $3.45 billion. The unit makes up more than half of operating profit.

Second-quarter net income rose to $638 million, or 59 cents a share, from $562 million, or 49 cents, a year earlier, the New York-based company said today. Excluding some items, profit was 60 cents a share. Analysts surveyed by Bloomberg estimated 56 cents on average.

"Warner Brothers has a lot of momentum from 'The Hangover Part II,' HBO is in a steady state and publishing is benefiting from the recovery in advertising," said Matthew Harrigan, an analyst at Wunderlich Securities who rates the stock "buy" and doesn't own it.

Time Warner also updated its full-year forecast. The company in May forecast an increase in adjusted earnings per share "in the low teens" off of a base of $2.41 in 2010. It said today growth on that basis would be "at least low teens."