The Reason Women's Magazines Are Missing Millennials Online? No News

When Katie Holmes blindsided Tom Cruise with divorce papers at the end of June, jaws dropped and young women scurried to get the details on the news as quickly as possible.

For most young women, that meant turning to their digital devices to instantly find out what was going on and why.

But what most young women ages 18-34 -- the millennial generation -- didn't do was turn to any of the traditional women's sites, such as Glamour.com, Cosmopolitan.com, MarieClaire.com, Elle.com, etc.

Even though young women's magazines had owned the hearts and minds of their audiences on the newsstand for decades, anticipating and responding to their every need, they have not established themselves as daily indispensable online destinations for their readers.

The question is why?

Their female audience is certainly at home on the web. Seventy-five percent of millennial women use the internet weekly for news or information (vs 49% who report reading a magazine weekly) and 62% own smartphones (up from 41% last year). Thirty percent own tablets (a huge increase from 8% last year).

Yet so far, most traditional young women's publishers appear to think they're answering the digital needs of their audience simply by making their magazines available for sale by subscription on the iPad every month.

As someone who spent 25 years as the editor-in-chief of several major young women's magazines and then spent the past three leading HollywoodLife.com, an online site targeting young, female millennials, I think I have the answer.

Traditional magazine brands are too often missing the key point of the internet's allure for their readers: immediacy. They are in no way set up to respond to this audience's all-important need to know, now.

Let me explain. As the editor of HollywoodLife.com, I learned very quickly that what fuels traffic to our site every day, all day, is news. Young women want to know all the very latest on celebrities, fashion, beauty, parenting information, diets, TV, film and all forms of entertainment.

The faster we have that news to them, the better. 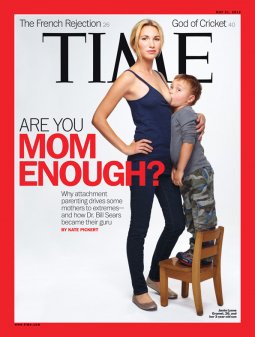 Take the "attachment parenting" issue, dramatically showcased on the cover of Time magazine, which depicted a startling photograph of a young mother breastfeeding her 3-year-old son on its May 21 issue.

One might think Glamour.com, Cosmopolitan.com, MarieClaire.com and Elle.com would have had a heyday with this issue, sparking a hot debate among their "mommy" age readers. But apparently none of them felt compelled or even tempted to join in the conversation. I know -- I checked them all.

At HollywoodLife.com, meanwhile, our reporters and editors were hot on the trail of every attachment-parenting angle, from the original story, to the celebrity reaction, to the "Today" interview with cover mom Jamie Lynn Grumet, to opinion pieces about extended breastfeeding. We covered the waterfront on the subject and our readers ate it up, commenting like crazy along the way.

Now, we weren't the only digitally native women's site to leap all over the debate. Jezebel.com, Yahoo's Shine, and SheKnows.com all plunged into the discussion and were rewarded I'm sure, like we were, with traffic and a deeper bond with our audiences.

Meanwhile the traditional women's media sites ignored the ruckus and missed the opportunity to engage with their audiences in a lively two-way conversation.

I suspect that this reticence to leap in on news has its roots in the fact that most of the editors of the traditional women's media websites come from primarily print backgrounds and are still living and working in a monthly mindset.

They simply aren't used to reacting quickly to news and then posting it without going through multiple layers of editors. Instead, their sites are set up to promote editorial content from their monthly issues and encourage young women to become subscribers. That's why they rarely feature any "news," whether it's a celebrity divorce or the latest red carpet looks.

For example, think of what Vogue.com, HarpersBazaar.com, Elle.com and InStyle.com could do if they, like several native online sites, covered in live-time major fashion events such as the Oscars, the Emmys, the Golden Globes, and the Metropolitan Costume Ball, posting photos and galleries as the celebrities hit the red carpet, and discussing the gowns, hair, makeup and more.

Then there is the platform challenge. Most of these sites haven't been built to enable the kind of easy posting that digitally native sites engage in.

The platforms traditional media live on often require "special" digital editors to post the site's stories, and these editors might not even sit on the same floor or in the same building as the site's editorial staff.

And then there's staffing. The traditional women's media sites rarely have more than two or three editorial staffers working on their sites. We have 15 staffers and post 50 to 60 times a day from early in the morning until late in the evening.

I also believe it's hard for traditional women's media sites to flourish in the online arena when they may also be seen as competitors to their own mother magazine brands. If their parent organizations see their mothership magazines as the primary revenue source, then they might see investing in sites that draw readers' eyeballs but not the equivalent revenue as a bad investment.

Coming from magazines, I have to say that editing a digitally native women's site is incredibly freeing -- all resources, all energies are devoted to building your new native brand.

You may be operating with a far leaner staff and tighter resources than a women's print magazine ever had, but there are other bonuses that your audience appreciates.

There's no worrying about giving coverage to great stories broken by the competition. You can cover them. There's no agonizing over which one story or celebrity can carry a cover for a month or a week.

And there's that invaluable opportunity to have two-way conversations in real time with readers and be able to respond immediately.

Lucky for us, it appears the women's traditional media sites have affectively made the decision not to compete for their own readers -- the millennial generation -- in the online space.

But with these print titles experiencing double-digit newsstand drops in the past year, can they afford NOT to get with the program.

ABOUT THE AUTHOR
Bonnie Fuller was a magazine editor-in-chief for 25 years at titles including US Weekly, Glamour, Cosmopolitan, Marie Claire and YM before launching Hollywoodlife.com. Follow her on Twitter @bonniefuller.

Bonnie Fuller
View all articles by this author