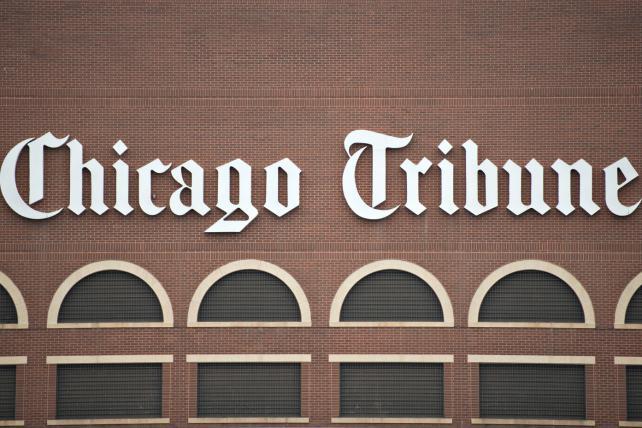 Despite all the speculation about a sale of Chicago Tribune, the Los Angeles Times and/or the other Tribune dailies, Mr. Griffin is setting his sights -- at least at the start of his tenure at soon-to-be-independent Tribune Publishing -- on buying smaller newspapers in or near his existing markets.

But constrained by debt heaped on Tribune Publishing by parent Tribune Media Co., Mr. Griffin will have to content himself with minor acquisitions that may not bring much revenue, or profit, to a newspaper company with $1.8 billion in revenue last year. Wooing national advertisers by offering them small newspapers is plenty of effort for marginal benefit, at best.

As the company prepares for a spinoff on Aug. 4, Mr. Griffin spoke at length for the first time in an interview about his strategy for what will be one of the nation's biggest pure-play newspaper companies.

"We think there are more of these opportunities around the country that are geographically adjacent to where we run big papers and big brands, and that over time we can achieve similar kinds of consolidation and acquisition opportunities that are going to add meaningfully to our footprint and our revenue and our profit," Mr. Griffin said.

Tribune Media is keeping its expanding broadcast operations and other assets, including Tribune Tower and other real estate holdings. Mr. Griffin, on the other hand, is taking on the challenge of leading what has been a shrinking print operation that boasts eight major papers, Chicago magazine and 150 niche publications, such as Hoy and the Jewish Journal.

Short-term play
As evidence of his interest in expanding the newspaper group, Mr. Griffin pointed to the company's $30 million purchase in May of two Maryland newspapers -- the Annapolis Capital and the Carroll County Times -- to broaden the company's footprint around its existing ownership of the Baltimore Sun. (The acquisitions increased its market penetration to 61% from 52%, spokesman Matt Hutchison said.) In February, the company also purchased the Baltimore City Paper.

The company may buy more print publications in or near the company's existing major markets, anchored by the company's big papers, in the hopes of bolstering its bid to attract national advertisers, Mr. Griffin said. He declined to comment on whether that might mean the company has an interest in acquiring the Chicago Sun-Times and/or its string of suburban papers.

But whether nickel-and-dime papers can really lure big advertising dollars remains an open question. Although newspapers in smaller communities have retained higher margins, they don't generate a lot of revenue, so it's really a strategy of soaking up more revenue from a shrinking pie, said Ken Doctor, a Burlingame, Calif.-based industry analyst who is also the author of "Newsonomics."

"It's a good three-to-five year strategy if you execute well," Mr. Doctor said. But it's really a strategy you only want to be leaning on for the time it takes to get to a more solid digital strategy, he said.

Before taking the top job at Tribune Publishing earlier this year, Mr. Griffin, 54, was a consultant at New York-based media industry consulting firm Empirical Media, where he had worked with Tribune as well as with other newspapers. Before that, he was CEO of Time Inc. for a year before being pushed out. He made a name for himself in the industry by boosting revenue as a top executive at magazine publisher Meredith Corp. from 2004 to 2010. He was president of Parade at Conde Nast from 1999 to 2003.

Mr. Griffin argued that the additional newspapers will strengthen the advertising base of the company's larger publications. They also will allow the company to more broadly deploy its new digital products. The publishing group also includes some 60 digital properties, according to a financial presentation the company disclosed July 24 in a regulatory filing. Those outlets are an increasingly important part of the strategy, he said.

More cost-cutting
He noted that a recent redesign of its Los Angeles Times site has generated double-digit gains in advertising revenue and readership. A similar redesign is rolling out next week on Chicago Tribune's website and the company will pursue similar overhauls on all its other newspaper sites as well, demonstrating the benefit of scale, he said.

The company is also hiring sales teams nationwide across its markets to sell search-engine optimization and social media campaigns. He couldn't say how many such employees have been added.

Still, cost cuts are likely, Mr. Griffin acknowledged, as revenue ebbs at its biggest papers. Sales at Tribune's publishing unit have dropped by 5% to 7% annually over the past five years, according to a filing the company made in preparation for the spinoff.

"Every newspaper company has taken costs out of the business to conform to the changing revenue conditions -- it's an absolute requirement of the business," Mr. Griffin said.

He said he thinks he can save money by centralizing procurement of supplies and operations. For instance, the purchase of copiers on a larger scale was something that only became possible over the past nine months as he set up a management structure to streamline everything from circulation to advertising to distribution.

"There are significant opportunities to create efficiencies just in the way we do business -- that's what we're focused on first," Mr. Griffin said.

It's unlikely, though, that he'll be able to cut as much as necessary without affecting jobs at a company that still has 7,475 employees across its system. "I don't think that, given the current finances, they can maintain their current profitability without cutting more jobs," Mr. Doctor said.

Lynne Marek is a reporter at Crain's Chicago Business.

Lynne Marek
View all articles by this author