Troy Young Is Reinventing Hearst Digital With a Wrecking Ball

Unlike his buttoned-up peers in the executive suite at Hearst, Troy Young doesn't keep an office, nor does he wear designer suits to work. Rumors have even spread that he insisted on a contract provision saying he didn't need to wear a necktie. He says there's nothing about ties in the contract -- though he claims to not own any. 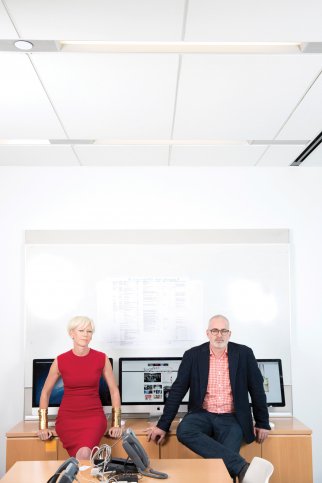 But that's not the only reason Mr. Young, hired in May by the privately held owner of Cosmopolitan and Esquire, is alien to the opulent Hearst Tower. His charge as president of Hearst Digital is to infuse a 126-year-old print brand founded on afternoon newspapers with the mentality and nimbleness of a digital startup. Redesigns of the magazine sites are on the way, as is an entirely new editorial mission for some of its online properties. "There's never been more pressure for Hearst to be good at digital," said Mr. Young.

But he could just as well been talking about the entire magazine industry, which is struggling to reinvent in the face of intense challenges online. Media empires like Hearst and Condé Nast are seeing their titles' websites draw fewer visitors than upstarts such as BuzzFeed and Gawker. The industry as a whole is still laboring to recover ground lost during the recession, when ad pages plummeted 26% from 2008 to 2009, according to the Publishers Information Bureau. Through the first half of 2013, pages have declined 4.9%. Digital revenue hasn't proved to be the savior.

The industry is hoping that a more muscular web presence could help it draw a larger audience and attract a greater share of digital spending, so Mr. Young's success or failure at Hearst will be closely monitored.

"It's an intense challenge. Digital media is hard. The pace of it is unrelenting," he said. "We have to force together disciplines that haven't worked together previously -- the business side, technical side, ad-sales side and content side. Those are hard things to do. I don't think they're natural."

His management style can be brusque. He is making some people at the usually polite Hearst Tower nervous. He has fired the top web editors at two of Hearst's biggest brands, Cosmopolitan and Elle, and butted heads with editors and publishers over the content and look of the Hearst websites.

"Troy has come in like a wrecking ball," said Joanna Coles, the editor-in-chief of Cosmopolitan, with admiration. "He's making big changes digitally, which is what we need."

Mr. Young joined the fledgling Say Media, publisher of websites XO Jane and ReadWrite, in 2006 before it had made a dollar in revenue. He sold the company's first ad and, by the time he left six years later, its revenue closed in on $100 million, according to Say Media CEO Matt Sanchez, who worked closely with Mr. Young. "Troy led from a place of passion," said Mr. Sanchez.

Several former colleagues hold Mr. Young in high regard. "I wish I had more Troys in my life," said Omnicom Digital CEO Jonathan Nelson, who worked with Mr. Young at Organic, which Omnicom bought.

Canadian-born Mr. Young lives in Brooklyn with his wife and three children. He's thoughtful and engaging, with the ability to cut directly to the heart of a topic. But colleagues also describe Mr. Young as someone who is deliberately provocative.

"He's fucking intense, and he'll fuck with you," said Quentin George, co-founder of Unbound and another former Organic colleague. "He feeds off surprise and response, and it's extremely useful. But a lot of people go, "Whoa! That's a little bit too strong.'"

After leaving Say Media, Mr. Young consulted for several companies, including SpinMedia. Around this time, SpinMedia bought Vibe and Spin magazines, shuttering Spin and reducing the frequency of Vibe. Layoffs followed, though Mr. Young was not directly involved in them.

"Troy was brutally dispassionate about decision making, which is the right way to make decisions in the world that digital publishers live in," said Steve Hansen, CEO of SpinMedia. "His style definitely ruffled feathers in our company, but those feathers needed ruffling. Our company looks much different than it did when he started."

And, if Mr. Young gets his way, so will Hearst.

Cosmopolitan.com is the beachhead for Mr. Young's charge into the publishing company. He plans to move Cosmo's digital staff to a content studio in a building adjacent to Hearst Tower. "While we are nursing [Cosmopolitan.com] to strength, we need to give it a place to do that," he said. Amy Odell, whom Mr. Young hired away from BuzzFeed, will lead the site. 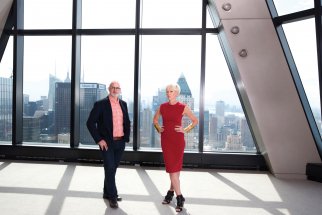 Ms. Coles is working closely with Mr. Young on a redesign of Cosmopolitan.com that will enable it to publish a stream of content. It will also incorporate new ad products, Mr. Young said, including sponsored posts that Hearst will help create for advertisers and e-commerce shops for specific brands that will exist in the feed.

Cosmo has the largest digital footprint at Hearst. In August, it attracted 3.1 million unique visitors, according to ComScore, a 19% boost from the previous year. It's also the company's best-seller at the newsstand, with about 1 million single-copy sales through the first half of 2013, according to the Alliance for Audited Media. That made Cosmo the second-best-selling magazine at the newsstand overall, but represented a 24% decline from 2012.

Hearst plans to add more senior digital talent to Cosmo's roster, according to David Carey, president of Hearst Magazines. "Those will be very demanding jobs," he said. "There will be 9 a.m. news meetings, content will be produced 24 hours a day, seven days a week by staff and freelancers stationed around the world."

Mr. Young wouldn't comment directly on that report but said, "You have to be smartly provocative online if you want to build audience and spark conversation."

He added, "I am always going to want to push writers hard to build their journalistic persona, take risks and in many cases be very personal and open. I think it works online. Particularly with some of our brands."

Ms. Coles, he said, comes from a different world than him. "Our dialogue is smart and energizing," he said. "But it will take time to find common ground."

Mr. Young has made several executive-level hires at Hearst Digital, poaching talent from The New York Times, Forbes and SpinMedia. Within the company, he promoted Mike Dushane to VP-product development at Hearst Digital, a role he formerly held at CarandDriver.com.

"I'm really focused on finding the freaks, the unicorns, the people who can bridge disciplines," said Mr. Young, who frequently talks as if he's onstage at a tech conference. "I find them both [inside and outside the company]."

Michael Clinton, president-marketing and publishing director of Hearst, said the redesign of the Cosmo website and Mr. Young's digital strategy will cascade down to other Hearst properties. "It's a complete reset," he said. Esquire.com is also among the first sites to get the redesign, but Mr. Young has not had an active role with Esquire, Hearst employees have said. (Mr. Young, however, has said that no Hearst site is off limits to him.)

By October, Mr. Young intends to pull digital staff at other Hearst magazines from their cubicles and put them in the Hearst Tower's 19th floor, where he's planning an incubator for the sites to develop. The space is meant to mimic that of a startup, where the physical trappings of corporate America -- corner offices and cubicles -- give way to long tables and laptops.

It's an unprecedented experiment at Hearst. "We need to put people in a room so they're communicating," he said. "It's really simple, but the backdrop is that across Hearst that hasn't always been the case."

Former Hearst employees have said executives, including top editors, believe the magazines' websites are incapable of doing the things the magazine could. As one former digital editor put it: "Print editors have a tendency to infantilize its websites."

Although moving digital staff to a separate floor is new to Hearst, focusing on its websites is not. After selling its stake in iVillage in 2006, the company invested millions of dollars on its web presence. Within a year, it built a custom content-management system, referred to internally as Magnus, according to former Hearst Digital employees. The company also made several notable hires in the digital space.

"The first chapter has been written," said Mr. Young, who is replacing Magnus. "I'm happy that first chapter is in place, but now we have to write the second."

He would not disclose how much money Hearst had allocated to him, but said digital investments are flowing to Cosmo, Esquire, Elle and Good Housekeeping.

"The digital product needs to be a great product, full stop," Mr. Young said. "And not against the print product, but as a product itself. My job is to get everyone to understand what that means and to push ahead."

~ ~ ~
CORRECTION: An earlier version of this article said Hearst sold iVillage in 2006. Hearst owned a stake in iVillage but did not own it.