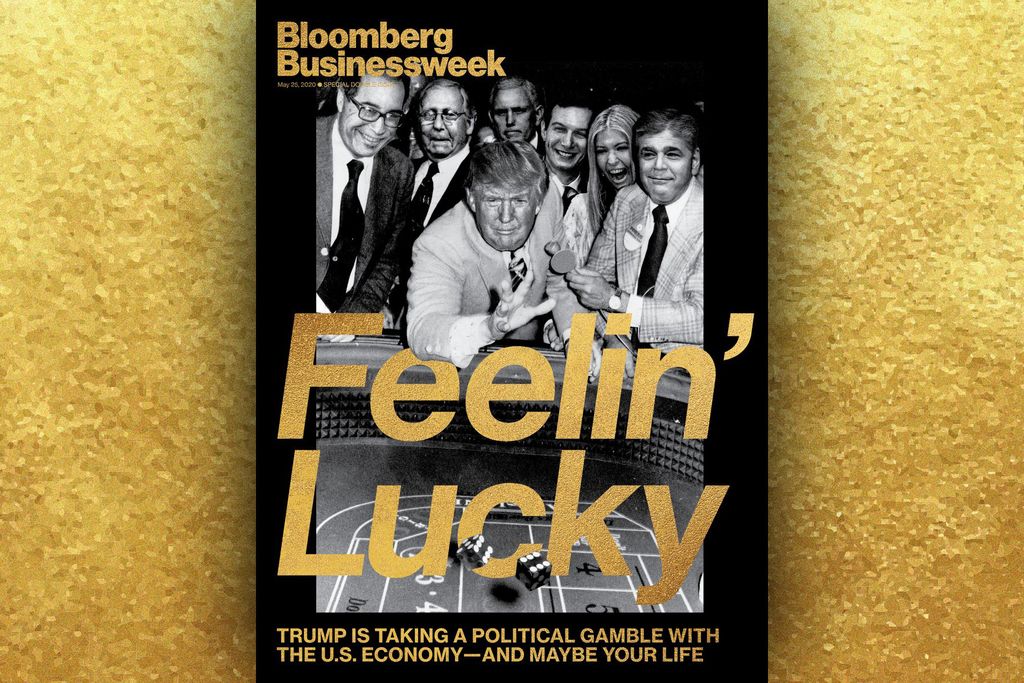 The May 25 issue of Bloomberg Businessweek, out today, examines President Trump’s push to reopen the American economy, starting with a provocative photo-illustrated cover of POTUS in gambling mode. The cover headline blares “Feelin’ Lucky” and the subhead establishes the stakes: “Trump is taking a political gamble with the U.S. economy—and maybe your life.”

The online version of the story inside the magazine, by Peter Coy, is headlined “Trump Is Gambling on a Resurrection, With Lives and Livelihoods.” Coy applies some game theory to the businessman-turned-politician—who, of course, famously presided over failed Atlantic City casinos back in the day—and attempts to parse the potential repercussions in November. He writes, in part,

With the election approaching, it’s reasonable to assume that Trump will double down on his gamble to get the economy to bounce back from what Bloomberg Economics calls the sharpest decline since World War II. But what about everybody else? What’s the right strategy—for companies, Congress, state and local governments, and families—as the U.S. begins to reopen with the virus still on the loose? Consider this a realist’s guide to outlasting the pandemic.

There’s actually a fair chance that Trump’s bet will pay off. Let’s say the number of new cases continues to fall nationally, as it has in most of the world, because most people continue to take precautions. Deaths remain elevated in nursing homes, prisons, and crowded multigenerational housing, but the public regards that as an inevitable consequence of the pandemic and doesn’t blame Trump. Democrats come to be seen as silly hand-wringers or, worse, obstructionists who tried to kill growth for political ends. Trump suddenly has a good shot at winning a second term.