Trump Will Remain Producer on New Season of 'The Apprentice' 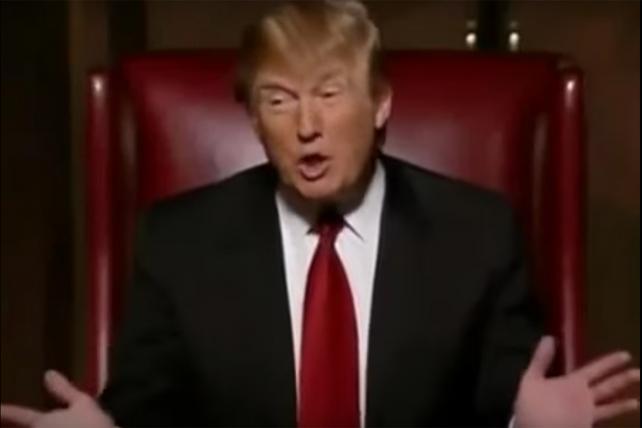 President-elect Donald Trump will be an executive producer on ''The New Celebrity Apprentice," the reality show in which he once starred, when its season begins 18 days before his inauguration.

Trump has been affiliated with "The Apprentice" on NBC since its inception in 2004, and has served as executive producer. The trade publication Variety, which first reported his continued role, said the president-elect will be paid, with the minimum probably in the low five figures per episode. His name will appear in the credits of the Metro-Goldwyn-Mayer-owned show after creator Mark Burnett and before Arnold Schwarzenegger, who replaces Trump as host, according to Variety.

Hope Hicks, a spokeswoman for the president-elect, didn't respond to a question about his position with "The New Celebrity Apprentice," saying only, "Additional details regarding Mr. Trump's business interests will be provided on Dec. 15." MGM confirmed Trump's credit on the show, while declining to comment further.

Comcast Corp.'s NBC network has committed to eight episodes, according to the publication. The new season starts Jan. 2, and Mr. Trump's set to be sworn into office on Jan. 20.

The arrangement, unusual for a sitting president, will likely subject him to criticism from watchdogs who've been on the lookout for conflicts of interest between America's first billionaire commander in chief and his many business interests.

"Suppose the show gets poor ratings?" asked Robert Stern, former general counsel for the California Fair Political Practices Commission. "Will NBC be reluctant to cancel the show since it does not want to offend the president, his Federal Communications Commission or other agencies that regulate the company?"

Comcast, for example, may seek acquisitions that require federal government approval. The company failed in its attempt to buy rival cable TV operator Time Warner Cable last year after regulators indicated they had problems with the deal. MGM, like other producers, faces restrictions by the Chinese government on how many films can be shown in that market, and Mr. Trump has vowed to be a tough negotiator with the Chinese on trade matters.

Mr. Trump has had an off-and-on public relationship with NBC. The network cut ties with the candidate last year after he referred to Mexican immigrants as rapists, then had him on as guest host of "Saturday Night Live" months later. When the late-night comedy show tapped Alec Baldwin to impersonate Mr. Trump in the final months of the campaign, the candidate lashed out at the show on Twitter, saying the program was unfair and no longer funny.

When it started out, "The Apprentice" featured a number of contestants competing in business-related challenges to win a spot as a worker at the Trump Organization.

Schwarzenegger, also a Republican, gave up acting after being elected California governor in 2003, though his image did appear in 2009's "Terminator Salvation," which came out while he was in office. He's since returned to acting.

MGM drew national attention in October after a video of Mr. Trump making lewd comments during a taping of the NBC show "Access Hollywood" leaked to the media and Bill Pruitt, a former producer on "The Apprentice," said there were much worse comments in that show's archive. MGM said it couldn't release the outtakes.