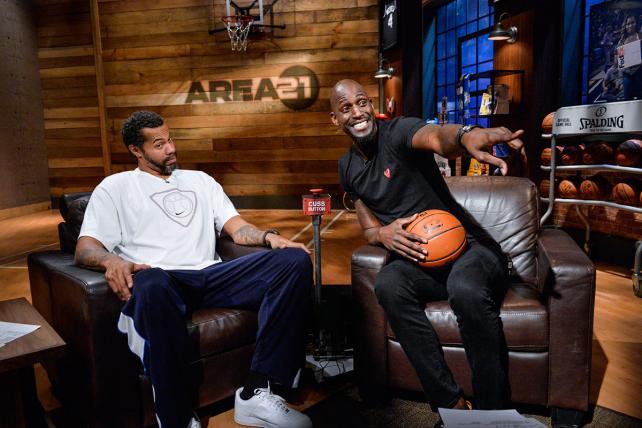 Not content merely to shake up its NBA broadcast and studio crews, Turner Sports next week will give advertisers an opportunity to make their mark on its new "Players Only" initiative, carving out a quartet of single-sponsor "superpods" that will air during TNT's Monday night doubleheaders.

Featuring a blend of isolated branded content, whip-around analysis and a custom 60-second capper, each takeover pod will replace the standard three-minute ad break that occurs between the first and second and third and fourth quarters of TNT's NBA coverage.

Designed to offer viewers a more engaging experience during basketball's longest in-game breaks, the superpods also provide TNT's NBA advertisers with a clutter-free chunk of real estate from which to market their products and services. If the experiment works out as planned, hoops enthusiasts will be more likely to pay attention to the brand messaging, which in turn would go a long way toward justifying the premium rates associated with taking up an exclusive position.

State Farm has signed on for the first "Players Only" superpod, which will air in the front half of the Feb. 27 Bucks-Cavs telecast. Signage for the insurance company, which is an official NBA sponsor and one of TNT's biggest advertisers, will appear in Kevin Garnett's "Area 21," the show-within-the-studio-show interview segments that debuted in November.

While an integration is not obviously in the cards -- unless KG were to challenge the khaki-clad Jake from State Farm to a game of H-O-R-S-E, the insurance category is a tough sell for that kind of thing -- there will be ample opportunity for the "Area 21" host to riff on the particulars of the game through the lens of the State Farm's "Right Combination" tag. (Think Cavs point guard Kyrie Irving feeding LeBron James for a monster alley-oop. Stuff writes itself.)

The pod will close out with an extended dance mix of an existing State Farm spot, in which it is revealed that TNT analyst and former three-point assassin Reggie Miller may have missed the boat on the whole cronut thing.

While TNT declined to identify other buyers for the night's other "superpods," one in the second half of the Bucks-Cavs game and two in the later Pacers-Rockets game, they're all sold and the network is "well down the road with a number of clients" for the next four "Players Only" packages, according to Will Funk, exec VP-sales and property partnerships at Turner Sports.

"There really are a lot of categories that make sense, and there's already been a lot of interest," Mr. Funk said, calling movies, consumer electronics and quick-serve restaurants particularly well-suited to the format. "It just so happens that our first partner is an NBA league sponsor, but we're talking to everybody."

In the early going, one of the primary challenges Mr. Funk's team faced was in how to price the three-minute pods. On one hand, the supply is limited to just 20 positions, as the last of the 'Players Only' games will air on March 27. On the other, the client isn't necessarily getting 180 seconds of wall-to-wall brand exposure. Kevin Garnett has the option to throw to the guys in the main studio down the hall or, in the case of the Cavs game, over to Greg Anthony, who'll be fielding the play-by-play call from Quicken Loans Arena.

"We feel that there' obviously a lot of value here, given that this is an exclusive ownership position, but of course it's not 100% brand messaging, because there's other content in the mix," Mr. Funk said. "It's not a matter of buying six units. This is something very unique."

Turner Sports' research department will track metrics such as viewer engagement, social interactions and return on investment measures to gauge how the pilot program is progressing. At any rate, the superpods will be scrutinized by millions of fans; the biggest potential draws among the "Players Only" games include a Celtics-Clippers battle on March 6 and the latest installment of the Russell Westbrook-Kevin Durant soap opera (Thunder-Warriors, March 20).

The "Players Only" swap extends to the studio show as well. For that five-week stretch, the "NBA on TNT" standard bearers Ernie Johnson, Kenny Smith, Charles Barkley and Shaquille O'Neal will ride the pine in favor of a temp unit anchored by Chris Webber. Isiah Thomas and Baron Davis will fill out the Studio J roster on "Players Only" Mondays, while the desk reverts back to its standard configuration on Thursday nights.