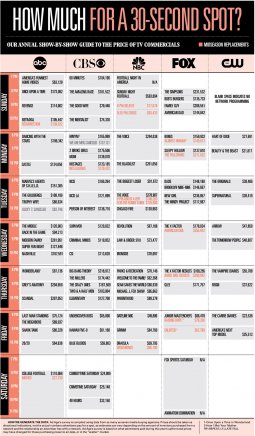 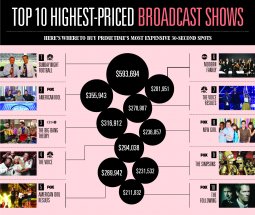 As viewers continue to time-shift programming, with networks pointing out a significant increase in DVR and video-on-demand usage this fall, football benefits from being one of the few programs consumers watch live.

The desire to tap into DVR-proof programming also seems to be helping "American Idol" hang on to its No. 2 spot. Despite continued ratings pressure and yet another overhaul at the judges' table, a 30-second spot in Fox's "Idol" cost an average of $355,946 in the new survey. After taking a major hit in the 2012-2013 season -- and still down significantly from its golden days, when advertisers paid more than $500,000 for a spot -- pricing for both the Wednesday night show and the results show remained steady.

It's not just broadcast networks that command hefty prices for their shows. Cable programming like ESPN's "Monday Night Football" and AMC's "The Walking Dead" are both competitive with broadcast prime-time.

It's difficult to compare many cable ad packages to those of broadcast because cable often includes multiple airings of a show. But according to media buyers, "Monday Night Football" in the upfront this season cost between $325,000 to $400,000, while "The Walking Dead" cost anywhere from $200,000 to more than $400,000.

Ad Age's survey is compiled each year using data from as many as seven media-buying agencies. (See our 2012 TV ad pricing chart right here.) The resulting prices should be viewed as directional indicators and are not the actual price that every advertiser pays for a 30-second spot. The numbers are based on a range of agency estimates that can vary depending on the amount of inventory purchased from a network, the inclusion of any nontraditional advertising, like product placements, and the relationship an advertiser and media-buying agency has with a network. Most TV advertising is typically purchased as part of larger negotiations, not on a one-off basis.

These estimates also reflect the prices advertisers and networks agreed on in this year's upfront marketplace. Prices have likely changed for those wishing to buy a spot closer to air date in the so-called "scatter" market.

The biggest surprise is CBS's "The Big Bang Theory," which shot up to third place from eighth, dethroning rival sitcoms "Modern Family" and "New Girl."

As the most-watched show on broadcast TV among the all-important adult 18-to-49 demo, "The Big Bang Theory" has become increasingly valuable to advertisers, with the average cost for a 30-second spot rising to 15% to $316,912. The Chuck Lorre comedy had its biggest premiere yet last month, with 18.3 million viewers tuning in.

Fox's "The Following," which will return for its sophomore season next year, squeaks into the top 10 for the first time as well, with advertisers paying $211,832 on average, up from $194,425 last year.

Overall, upfront TV prices for ad time seem to be on the decline across the board, with more shows seeing decreases than increases. Sunday nights are down for everyone except NBC, which is boosted by "Sunday Night Football." CBS's, ABC's and The CW's entire Monday night schedule costs less than last year. NBC's Thursday night comedy block is also off from the 2012-2013 season.

Some of the biggest declines include CBS's "2 Broke Girls" and "Two and a Half Men," both of which were bumped from the top 10. Fox's "Family Guy" also did not make the top 10 this year, after placing seventh in the 2012-2013 season.

But CBS's Thursday night lineup is costlier than last year, buoyed by "Big Bang" and new comedies "The Millers" and "The Crazy Ones." NBC's Monday nights have also gotten a boost from "The Voice" and "The Blacklist," this season's most expensive new show for marketers at $201,650. ABC's Thursday night is up from last year as "Scandal" saw a big jump in price, with advertisers paying an average of $207,053 compared with $139,668 last season.

Fox dominates the chart, airing half of the top 10 most expensive shows for the 2013-2014 season.