Women Contestants Steal the Show (Even on Olympics)

MINNEAPOLIS (AdAge.com) -- Dynamic young women performers trying to make it big as the next international star. The women's figure skating competition on the Olympics? Well, yeah, that too. 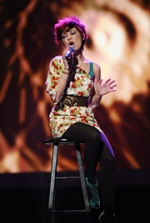 'American Idol'
But it seems far more were interested in Fox's "American Idol," which out-scored the Olympics, according to Nielsen judges, by 63% in the ad-centric adult 18-49 demographic. The two-hour "Idol" belted out a 9.0/22 rating and share, which was 98% of last week's level, to win ratings gold, while NBC's Vancouver Olympics got the silver with a 5.5/14 ratings replication from a week ago.

Tonight's test will be between "Idol's" guys who want to make it big, as well as some guys in the Olympics who are looking to do the same, as well as one who already did, Apolo Ohno, who is more famous for an "Idol"-like reality show, ABC's "Dancing With the Stars," than his mettle-winning medals over the last three Olympic Games.

WHAT TO WATCH FOR:
Once again a battle between NBC and Fox, as the rest of the rival networks show reruns.