Rash Report: Fox Comes in Second, Led by 'House'
READ THIS NEXT
Reach and relevance: The new video landscape

MINNEAPOLIS (AdAge.com) -- The new media revolution not only needs new equipment, but also a new dictionary, as words such as "Hulu" and "iPad" enter pop-culture parlance. But a much more low-tech method is here now, and bound to raise ratings at the beleaguered broadcast networks: run new episodes of viewers' old favorites. 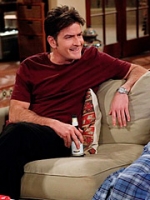 'Two and a Half Men'
CBS relearned the lesson last night, with original episodes powering the Eye network to first place in the ratings race with an overall 4.1/11 rating and share in the ad-centric adult 18-49 demographic.

ABC was third with a 3.5/9, as "The Bachelor's" lead-out, "Castle" (2.2/6) ran a rerun. But perhaps because people are still discovering the show, it was only down 12% from its original episode average.

Of course, original episodes only go so far. They have to be for programs that are in relatively high demographic demand in the first place. NBC, for instance, finished fourth with a 1.9/5 despite new showings of "Chuck" (2.4/6), "Heroes" (2.0/5) and "The Jay Leno Show" (1.1/3). And the CW still struggled despite having new episodes, as "One Tree Hill" and "Life Unexpected" both delivered a 1.0 rating.

To be sure, the nets need to adopt and adapt to technological transformations in order to maximize viewership. But by still depending on an original episode/rerun business model they are still operating as they did when rabbit ears were the next big thing.

WHAT TO WATCH:
Tuesday: The last "Lost" season begins on ABC.
Wednesday: Could any media or marketing professional not recommend CBS's "Super Bowl's Greatest Commercials 2010"?

WHAT TO WATCH FOR:
Too many people involved in social media to notice "Digital Nation," PBS's "Frontline" examination of the way the web alters "how we work, learn and interact."