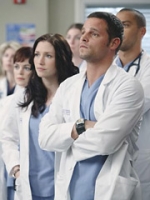 (Despite the spike, however, both shows were off from their original episode season-to-date averages, with "Grey's" down 18% and "Private" eroding 8%, displaying how corrosive reruns are, as they break viewing habits.)

Combined with a series-low 1.3/4 for "The Deep End," ABC won the night, doubling last week's average to an overall 3.1/8. (All based on Nielsen fast affiliate ratings, with final live-plus-same-day data due Friday afternoon.)

ABC's winning margin was just a tenth of a ratings point ahead of CBS and Fox (a second-place tie with a 3.0/8 each). CBS was up 67% from last week's repeats, but its shows also underperformed original episode averages. "CSI" (3.2/8) was up 60% from last week, but was 14% below its regular level. Lead-out "The Mentalist" (3.3/9) increased 43% from a week ago, but it was also down from its average, albeit by a more modest 6%. And although clip show "Surviving Survivor" was a "new" show about old episodes, its 2.4/7 was 140% higher than the reality non-starter from last week, "Live for the Moment."

Fox was smart like one last week, running original episodes against all the reruns to win overall. It continued with a fresh "Bones" (3.3/10) and "Fringe" (2.6/7) last night, but the tougher competition meant they were down 8% and 13%, respectively.

The CW also ran original episodes last week, which allowed it to tie with both ABC and NBC. No luck against original episodes this week, as the CW was back to finishing fifth with a 1.5/4. But that was the same rating overall as a week ago, as "Vampire Diaries" (1.8/5) held all of last week's audience, and "Supernatural" (1.1/3) was only off a tenth of a ratings point.

As for NBC, it finished fourth with a 2.3/6. But first-run episodes of its sitcoms were significantly higher than last week's second showings: "Community" was up 38% to a 2.2/7, and down just a tenth of a ratings point from its original episode average; "Parks and Recreation" soared 44% to a season-high 2.3/6, over-delivering its regular level by 10%; "The Office" added 81% more viewers in the demo as it posted a 3.8/10, although that was 7% below its average; "30 Rock" matched its season-to-date 2.9/8 average, which was 71% higher than last week's repeat.

But then, "The Jay Leno Show," billed as the show that was set to beat repeats, but rarely did, matched last week's 1.2/3, which was off 25% from its already low average.

WHAT TO WATCH:
Friday: Last year's annual Harris poll on the popularity of film stars still listed amongst the top ten John Wayne, even though he passed away in 1979. Find out why as TCM runs "True Grit" and "The Shootist."
Saturday: Of course, for kids these days it's not the Duke, but the wizard, so they may want to watch "Harry Potter and the Sorcerer's Stone" on ABC.
Sunday: For the football. For the ads. The Super Bowl on CBS.

WHAT TO WATCH FOR:
The Super Bowl is the nation's most observed unofficial holiday. And with NFL ratings spiking this year, expect a big rating, even by big game standards.