MINNEAPOLIS (AdAge.com) -- Fox's contestants often go on to earn gold records. But NBC has won gold medals, which was enough to put "American Idol" in the silver medal position for the first time in six years. 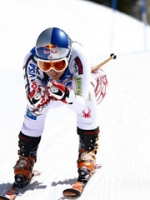 US gold-medal winner Lindsey Vonn
NBC's Olympics coverage of America's six-medal day, which looked like a highlight reel of the entire games, as opposed to just one night, scored a 9.0/24 rating and share in the ad-centric adult 18-49 demographic, which was 63% higher than the previous evening. Meanwhile, "Idol" was turned down to a 7.0/17, which was only 76% of its Tuesday tune-in.

As for NBC, while the network is taking a critical beating for not showing Vonn's gutty, gritty race live, the late-afternoon internet buzz built the taped version into a more recent version of "Must-See TV." Indeed, the network's new golden girl brought back ratings shades of glory more reminiscent of the "Golden Girl" era of the mid-1980s and early 1990s.

WHAT TO WATCH:
Thursday: Olympics: Lindsey Vonn vies for gold again, this time in the super-combined. And blades of glory for men's figure skating and women's speed skating, which each have gold-medal events. Non-Olympics: Think it looks cold up on top of Vancouver's Whistler Mountain? You ain't seen cold until you've watched "Fargo," which runs on My Network TV.
Friday: Olympics: Back to the guys, it's the gold-medal final for the men's Super-G. Non-Olympics: Great recession got you down? Escape with a great film about escapism, "Breakfast at Tiffany's," on TCM.

WHAT TO WATCH FOR:
By the time you read this, it will be nearly impossible to not know if Lindsey Vonn won another gold medal. If so, watch for another great night for NBC.