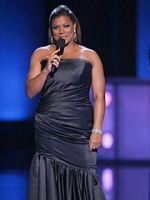 Fox's "Glee," which won for "Favorite New TV Comedy," ran back-to-back second showings, which averaged a fourth-place 1.3/4. The CW's "Gossip Girl" it-girl, Blake Lively, was nominated for "Favorite TV Drama Actress." But she didn't show up on the winners' podium, and her show only showed up in a repeat, as it was just whispered about by a .2/1 in the demo. Lead-in "One Tree Hill" delivered a .3/1, which was the fifth-place network's overall average.

Given all the pre-season buzz, NBC execs could be forgiven if they hoped "The Jay Leno Show" would have won, or at least have been nominated for an award. But instead the network has been rewarded with low ratings (1.5/4 Wednesday night), angry affiliates and today's runaway rumor that the show has been canceled. "Mercy," another new (and non-nominated) NBC drama, sunk to a season-low tying 1.7/5.

The bright spot for NBC, which finished third overall with a 2.1/6, was "Law and Order: SVU," whose star Mariska Hagerty was also nominated for "Favorite TV Drama Actress." She didn't win, but her show won 19% more viewers than its usual original episode average, as it locked up a 3.1/8.

Of course, the new and novel generally win the People's Choice hardware, as it's hard to get excited about shows most viewers have honored previously. ABC's "Ugly Betty," for instance, was nominated in 2007 for "Favorite New TV Comedy" and in 2009 for "Favorite TV Comedy." But that was two years and two timeslots ago. In the first week of 2010, "Ugly Betty" delivered an unattractive 1.6/5 in its new 10 p.m. Wednesday time period. While this was 23% higher than its original episode average for the scheduling gulag of Friday nights, it was only 59% of its average for the 2008-2009 season when it preceded "Grey's Anatomy" on Thursdays.

But if it's winter for "Ugly Betty," hope springs eternal for ABC on the night. "Modern Family" not only had big ratings last night, but is a critical hit (including a "Best TV Comedy" nomination last night). Critics have cooled on "Cougar Town," conversely (although it also received a "Best New TV Comedy" nod). But by reuniting "Friends" friends Courtney Cox and Lisa Kudrow, "Cougar Town" had its best delivery (3.3/8) since mid-October.

And although "The Middle" wasn't up for any awards last night, it's likely to be awarded with renewal next year, as it hit a post-premiere high of 2.6/7 in its regular 8:30 p.m. timeslot after posting a 2.1/6 a half hour earlier. Overall, ABC finished second with a 2.6/7.

WHAT TO WATCH:
Thursday: Shake off that shiver by watching two warm weather teams, Alabama and Texas, play in Pasadena's Rose Bowl in the BCS National Championship, on ABC.
Friday: A big NBC star jumps to prime time and is really funny! Check out Brian Williams at 10 p.m. (Oh yeah, Jay Leno will be there, too.)

WHAT TO WATCH FOR:
The Texas Longhorns in an upset. Regardless, the clear favorite, Fox, will have a big night in the ratings race.