Who Had the Better Media Strategy: CW's '90210' or NBC's 'Knight Rider'?
READ THIS NEXT
Facebook offers millions of dollars in refunds to advertisers tripped by measurement mistake
This month's new fall TV schedule saw a number of returning favorites from the previous season, but two notable franchises also found their way back onto our screens. The CW's makeover of "Beverly Hills 90210" and NBC's revival of "Knight Rider" were two shows that almost everyone remembered. Would viewers invite them back? And how would a new generation of 18- to 34-year-olds respond?

TV program remakes in recent times have had mixed results. "Battlestar Galactica" on the Sci Fi Channel and last season's "Bionic Woman" on NBC were both well-produced shows, but the latter didn't make it to a second season.

Marketing TV programs is an intensely competitive business, especially this year, with some 14 new shows launching this September on national network prime time alongside returning series. For the CW, "90210" was an important new show. Since the merger of WB and UPN, Dawn Ostroff and the network have been heavily scrutinized. "Gossip Girl," despite great buzz and an active digital audience last season, was challenged when it came to Nielsen ratings. "90210" represented the CW's most important new show, one that was to anchor its Tuesday night. NBC's Ben Silverman announced that his programming strategy for NBC was going to dispense with the traditional pilot development and go straight to series, leaving less room for error. "Knight Rider," which launched Sept. 24, represented one of a handful of the new shows.

We decided to evaluate the media and promotional strategies of "90210" and "Knight Rider." Here's how they handled it:

Overall Communication Strategies
One major advantage of airing a remake is the built-in awareness that these shows carry. According to August tracking reports, both "Knight Rider" and "90210" had the highest awareness levels of any of the new shows coming into the season. Clearly, awareness is not a guarantee of success, but promising shows have failed due to insufficient awareness and trial in the opening weeks of a new fall season.

With "90210," the CW had to tap natural interest from the nostalgia and early buzz for the show. Rick Haskin, CMO for the CW, said, "We knew [in '90210'] we had a brand asset. Intent to view was high. We needed to make sure we didn't disenfranchise them." The show targeted women 18-34 and they wanted to drive the audience both on TV and online.

For "Knight Rider," NBC had the benefit of a "backdoor pilot" in the form of the two-hour made-for-TV movie that the broadcaster ran earlier in the year, which drew a healthy 12.7 million viewers. NBC wanted to build "intent to view" among men 18-49. To supplement its TV promotion, its strategy incorporated car-enthusiast print, digital community-sites and live events as media to build buzz among a key base audience who they hoped would drive interest amongst a wider audience. RATINGS

Each show chose a totally different strategy when it came to launching their pilot episodes. The CW went against common convention and kept "a lid on the pilot" by not releasing it to the TV reviewers or advertiser community ahead of its public screening slated for Sept. 2 (9-02, get it?). TV critics griped, but I suspect for the CW, it was a calculated risk -- why take a chance on getting reviewed by 40+, male (and hard to please) critic for a show targeting a largely teen and 20-something female viewer?

Branded ice-cream trucks gave away ice cream and '90210' info at waterfront locations in LA, NY and Chicago.
They hoped that this would help build anticipation for a live premiere, allowing the audience to make up their own minds. Fresh from the furor of last season's "Gossip Girl" promotion, whose content created concerns among the Parents Television Council, the CW was aiming for another boost in publicity.

NBC took the entirely opposite view and released the entire pilot, along with a number of shows on its schedule, on NBC.com, Hulu.com, AOL and other online video sites in advance of the pilot's launch date of Wednesday Sept. 24. According to CMO John Miller, NBC was prepared to allow its core fans to view the pilot online -- empowering them to drive interest in the series. NBC's experience with the Olympics seemed to support its strategy of using online to drive TV ratings.

"Knight Rider" benefited from promoting its spots during the Beijing Olympics coverage over the summer, which helped build interest and gave us all a welcome break from the too-often played Kath & Kim trailers. Station trailers appeared consistently on NBC, including its NFL Saturday football show. This was complemented by a cable schedule of male-targeted programming. The CW ran a schedule on cable channels targeting women 18-34, including VH1, MTV, ABC Family, E! and Comedy Central. The CW ran a heavy trailer schedule on its own network across the summer, culminating with three prime placement spots in-program, the last of which broke during the season premiere of "Gossip Girl."

The PR department at the CW worked overtime on "90210." Right from the announcement of the show, there was an enormous level of buzz. The PR team was particularly adept at releasing weekly snippets about the show from cast interviews, as well as rumors of potential casting roles for Jennie Garth, Shannen Doherty and an on-and-then-off deal with Tori Spelling. Stories circulated speculating about whether Kelly's (Jennie Garth) son was Brandon or Dylan's -- providing healthy fodder for the blog communities. The CW seemed to prioritize "90210" in its press, leading to an appearance on the front cover of Entertainment Weekly and TV Guide.

"Knight Rider" didn't have as much to talk about as the "90210" publicity team. The press focused more on K.I.T.T. than the actors. The Ford Shelby GT500KR was featured heavily in the releases which, while interesting, didn't have as many legs. Buzz Metrics confirmed that "90210" significantly outpolled "Knight Rider" on word of mouth.

"90210" integrated a social-media program to promote the show. The CW team cleverly leveraged the iconic opening- theme music as a hook to promote the show online. They made a ringtone available online, releasing it on sites such as myxer.com, which allowed it to take a viral life of its own. 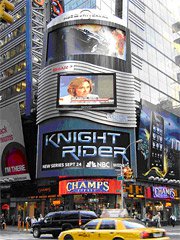 'Knight Rider' Ad in Times Square.
They also promoted a contest on Imeem.com for users to create their own cover version of the soundtrack.

Additionally, the CW released content consistently each week on YouTube. The first on-air promo got over a million unique views. They posted actor interviews, behind-the-scenes footage and different promos to over 150 different sites. They customized widgets on MySpace, Facebook and sites such as MyYearBook.com. For the latter, they included a promotion to encourage "90210"-themed parties, inviting participants to send in their party photos and vote for their favorites for an opportunity to win entry into the "90210" premiere party in Los Angeles.

"Knight Rider's" digital plan targeted car-enthusiast sites such as CarAndDriver.com. It also included a takeover (or pre-home) page on MySpace with a car talking to potential viewers. The plan benefited from numerous "Knight Rider" fan sites that helped carry the interest.

"Knight Rider" had high visibility on the ground. It had a strong presence at this year's Comic Con in San Diego. It released a five-minute clip of the show, had almost the entire cast participating on a panel, and unveiled the Attack K.I.T.T. for the first time. K.I.T.T. bumper stickers with snappy headlines such as "K.I.T.T. happens" were distributed at the event.

Unveiling of the new Attack K.I.T.T. at San Diego Comic Con July 2008.
NBC teamed up with Ford and Yates Racing to sponsor Travis Kvapil, who drove a specially painted No. 28 "Knight Rider" Ford for the Nascar Sprint Cup Series race at the Bristol Motor Speedway, giving it the benefit of exposure on ESPN's coverage for the month leading up to the premiere. Cross-promotions also took place at the "Knight Rider" Car Show at Saugus Speedway in Santa Clarita, California, and the Forney Museum of Transportation in Staten Island, leading up to the show's launch. Launching "90210" the day after Labor Day, the last official day of summer, the CW went all out to create out-of?home visibility, prompting viewers to tune in on Tuesday night. It orchestrated "90210"-branded ice-cream trucks blasting the "90210" theme music on loudspeakers while giving out free ice cream with "90210" branded info at waterfront locations in LA, New York and Chicago. It also used aerial banners, sky-writing and signage at baseball stadiums.

Ford was very active in supporting its partnership with "Knight Rider" with media promotions in properties such as ESPN and Sports Illustrated. Mio released a "Knight Rider"- themed GPS system voiced by William Daniels -- the original K.I.T.T. voice -- with a feature to personalize the phrase "Hello, where do you want to go today?" with one's one name.

"90210" was much more active in out of home than "Knight Rider." The CW focused its spending in seven metro markets, particularly New York, Chicago and LA, which had the benefit of getting in front of the media-buying community using the iconic "pool" creative. "Knight Rider's" out of home included some spectacular ads but they were limited to placements within New York's Times Square and the studio's Burbank premises.

Two new shows, both modern makeovers of TV classics. Their respective networks employed very different strategies to promote them to their potential target markets. That's the beauty of marketing: there are different ways to win. 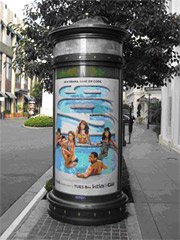 '90210' outdoor ad.
I liked how they both had clear points of view of who they were going after and were particularly resourceful about how they went about maximizing "intent to view." They executed their strategies creatively and leveraged their assets. For "90210," the CW created a lot of buzz via PR and online social- networking tactics. NBC made the car its hero for "Knight Rider," literally taking it on the road, while optimizing the network's Olympic airtime and strong ratings-base to promote the show.