Journalists this week received an official "Twitter for newsrooms" guide, promising to help them do their jobs: "finding sources, verifying facts, publishing stories, promoting your work and yourself -- and doing all of it faster and faster all the time."

Divided into four sections -- #Report, #Engage, #Publish and #Extra -- it promised to be a comprehensive look at best Twitter practices for news gathering operations. It quickly became apparent, however, that one chapter was strangely missing ....

We know that a core part of your day is spent wallowing in a deep depression, brought on by the collapse of your profession's business model and the realization that you'll soon know precisely how long it takes to heat up a Big Mac. Although Twitter has done nothing whatsoever to contribute to this -- repeat, nothing -- we are here to help. One of the most effective ways that high-profile news outlets have been able to leverage our platform is by using it to channel their rage. What better way to combat melancholy than by transforming it into a 140-character vitriol?

Today we've assembled a suite of targets for your most engaging and enraging animus. We hope that poking at some of them lets through a glimmer of light into your dark days. Who knows? If you purple the right nurple, you might just start a full-on battle royal, earning dozens of @-replies and hundreds or even thousands of more followers in the process. We know that having more followers won't sate your perpetual hunger for scoops or, in the more extreme cases among you, food, but we want to give you the toolkit you need to eek out a living on the outer rings of the infotainment megacity.

Not all new media experts are created equal. Some roll with the punches; thinkers such as Jeff Jarvis throw down at most provocations. As we observed with Katie Couric, Jeff is a natural conversationalist and a quick wit. He will also rip out one of your kidneys and eat it in front of you if you accuse him of writing something he hasn't. And what's more engaging that that ?

Here's how to get his goat:

Let's look to Jeff Bercovici here. The Forbes writer argued in April that Jarvis and Jay Rosen's support of "Journalism 2.0" resulted in the deaths of 24 people in Afghanistan after coverage of Quran-burning in Florida.

Oh for fuck's sake, @jeffbercovici, show me where @jayrosen_nyu & I say what you say we say. Links, damnit. http://bit.ly/gLCbW7 #lazyassless than a minute ago via Echofon

But Twitter isn't just a place to piss off Jeff Jarvis. You can also use it to pick fights with PR people. The key here is making sure that your target isn't on better footing when it comes to the accuracy of your attack. It's also nice if they're not smarter than you.

David George-Cosh, a former technology reporter for Canada's National Post, had a #winning moment when he got into it with April Dunford, a PR person who didn't return his calls. After he reamed her on the phone, she tweeted about the exchange without naming them. Then they both successfully overcame any lingering Canadian niceness and went at it on Twitter: 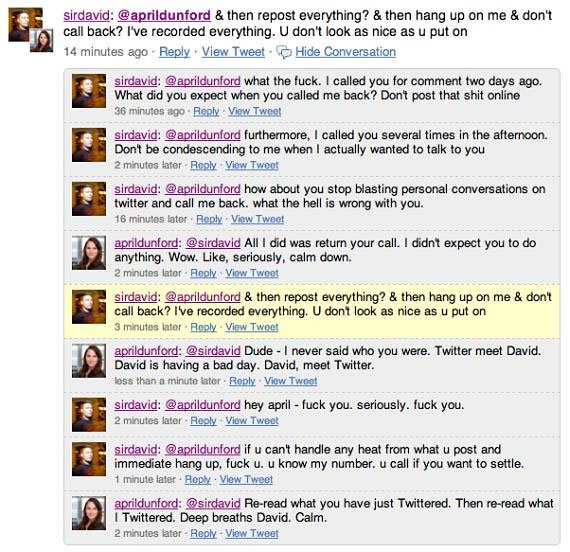 Picking a fight with Twitter is not for beginners. You're probably going to want to take a swipe at a new media expert and PR person or two first. For one thing, you have to have enough clout that your opinion about us means something to the broader world. You also need to be important enough so that it's fun for other people to take you apart. This might sound like a lot of work, but the good news is that your criticism doesn't need to be particularly thoughtful, as The New York Times' Bill Keller recently demonstrated. With a simple line, "#twittermakesyoustupid discuss," he invited the disagreement of thousands of our biggest fans, including our old friend Jeff Jarvis:

Bill. The NYT no longer tells us what to discuss. Twitter does. ;-) RT @nytkeller: #TwitterMakesYouStupid. discuss.less than a minute ago via Echofon

This was a home run and we'd love to see more like it. You might be wondering why we'd encourage attacks. Don't worry for a second about us. We have lots and lots of fans.

And, besides, we love it when Twitter becomes the story.