The U.S. Media Barons Set To Hand Over Empires to Next Generation | Ad Age
Skip to main content

The U.S. Media Barons Set To Hand Over Empires to Next Generation

Sheri Redstone, James and Lachlan Murdoch Get Ready For Their Turns

Four of the largest U.S. media companies will be under new management as patriarchs Rupert Murdoch and Sumner Redstone prepare to hand the reins to their children.

21st Century Fox Inc., one of two media companies controlled by the 84-year-old Murdoch, said Thursday its board will weigh succession at its next meeting. Members are expected to name James Murdoch, 42, the founder's son, as the next chief executive officer, a person familiar with the matter said. An older son, Lachlan, 43, is chairman of News Corp., which owns the Wall Street Journal and is also controlled by the Murdochs.

A similar transition is taking place at CBS Corp. and Viacom Inc., where an increasingly frail Redstone, 92, has designated his daughter Shari Redstone, 61, and her 29-year-old son Tyler Korff as the sole family representatives among seven trustees who will oversee controlling stakes in both companies after he dies.

The new generation of leaders will probably rely less on megamergers to fuel growth and focus instead on the digital technology sweeping the industry, including streaming and the impact of social media. In Murdoch's case, the change may mean media outlets such as Fox News and the New York Post are less strident politically than they have been.

"I don't think they're going be doing big, elephant-hunting deals, at least in the short run," said Harold Vogel, CEO of Vogel Capital Inc. in New York, who was speaking specifically of the Murdoch sons. "That's good for the stock."

The transitions put both media empires in the hands of children who cut their teeth at the feet of larger-than-life fathers. With audacious takeover bids for well-known film and TV companies, both men built media giants from smaller businesses they inherited from their own fathers -- Rupert Murdoch with a family newspaper company in Australia and Sumner Redstone, a Boston-area cinema chain.

"We have always viewed Rupert as an empire builder who is more concerned with accumulating assets than with delivering shareholder returns," Doug Creutz, an analyst with Cowen & Co., wrote in a note Thursday. "James does have extensive operational experience, and could turn out to be a good or even great CEO who is more sensitive to shareholder concerns than Rupert was." 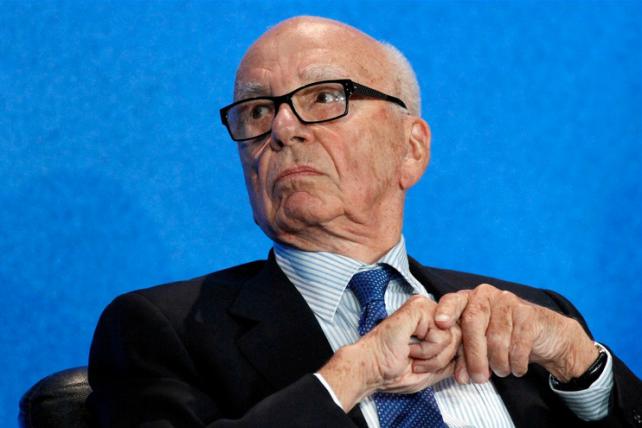 Murdoch's big bets weren't always on mergers. He backed "Avatar" and "Titanic," two big-budget film properties that went on to become the top-grossing films of all time.

While the older generation of barons could count on growing newspaper, TV, film and cable TV businesses to support their efforts, the emerging leaders are confronting an era of slow or no growth for traditional media and the loss of customers to new digital outlets, like Netflix Inc., Amazon.com Inc. and Google Inc.'s YouTube.

Analysts and friends predict James Murdoch and Shari Redstone will be more about investor returns than their fathers.

"She's much more concerned with outcomes than being in the driver's seat," Jon Miller, former CEO of AOL and a partner with Shari Redstone in her venture capital firm, told Bloomberg News last month. "She's been very consistent with me: 'What I want to see is the companies do well. I don't have to be an executive in either.'"

At News Corp., Lachlan Murdoch has already been staking out a future that goes beyond print properties such the Times of London and HarperCollins, a book publisher. Last year, News Corp. bought Move Inc., parent of realtor.com and other real estate-related websites.

"It seems as if News Corp. is doing a better job than most in terms of diversifying into various iterations of media," said Nicholas Lemann, former dean of Columbia University's journalism school. "They're not just a newspaper company anymore."

Younger Murdochs with less attachment to the print side of the business may decide to sell the money-losing Post, said Rodney Benson, an associate professor of media studies at New York University.

"It's not clear what the Murdoch children stand for -– the same politics and king-making aspirations as their father, something else, or nothing at all?" Benson said in an e-mail.