In a shot across the bow at the XFL, an Ebersol cooks up a rival football league | Ad Age
Skip to main content

In a shot across the bow at the XFL, an Ebersol cooks up a rival football league 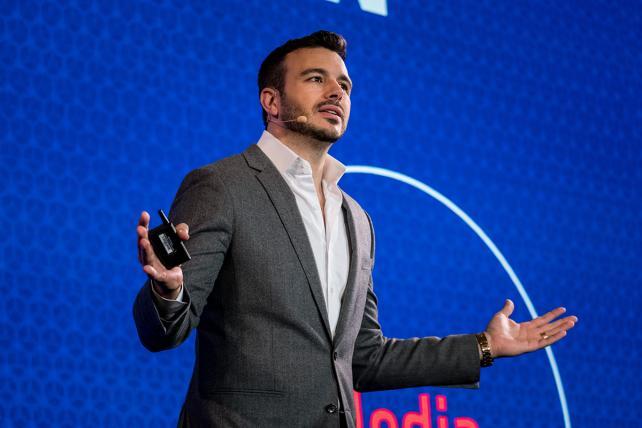 Two months after Vince McMahon announced plans to reboot the long-shuttered XFL, the eldest son of McMahon's erstwhile business partner is looking to steal some of the wrestling mogul's thunder with a league of his own. And while it's far too soon to predict how filmmaker Charlie Ebersol's upstart Alliance of American Football will fare, the startup already has a TV distribution deal in place with CBS.

Speaking to the press Tuesday morning from the Park Hyatt hotel in Manhattan, Ebersol and former Buffalo Bills GM and Indianapolis Colts President Bill Polian took the wraps off their blueprint for the AAF, a new spring football league that's slated to debut on Feb. 8, 2019—the Saturday following CBS's coverage of Super Bowl LIII. The inaugural AAF game will air on the CBS broadcast network, with the balance of the 10-week regular season schedule slated to run on the cable outlet CBS Sports Network.

Should the AAF kickoff as planned, it will beat the new-look XFL to the market by a full year. McMahon in January said the resurrected XFL aims to begin its first season in late January or early February of 2020.

While Ebersol and Polian's presentation wasn't exactly overladen with details—as with McMahon's XFL presser, the formal introduction to the AAF did not include any information about which cities were expected to host the eight startup teams—securing distribution on CBS/CBS Sports Network represents a significant development for the upstart league. No such agreement is in place for the XFL.

"As the Alliance of American Football launches next February we are excited to become the official television partner," said CBS Sports Chairman Sean McManus in a statement. "With Charlie Ebersol and Bill Polian at the helm, we are confident that the product they deliver will be entertaining, exciting, engaging and something that fans will really enjoy." Ebersol characterized the AAF-CBS arrangement as a "multiyear deal."

In order to speed up the games, which Ebersol said will run for about two and a half hours, or roughly 45 minutes less than the average NFL contest, CBS and CBSSN will forego all premeditated commercial breaks. "We're going to do something that should have been done a long time ago," Ebersol said. "We're going to get rid of the television timeout. The game will only stop when it naturally stops."

Ebersol added that eliminating preset commercial breaks (NFL broadcasts feature 10 ad pods per half) will go a long way toward reducing the volume of marketing messages fans would otherwise have to endure over the course of any given game. "We're going to have 60 percent fewer commercials," he said.

If demand for AAF inventory is robust, CBS will be able to use that relative scarcity to its own advantage … although obviously it's far too premature to so much as hazard a guess about how the market will shake out.

Furnishing ratings guarantees for the CBSSN package may prove to be a bit of a challenge for the CBS Sports ad sales team, given that the cable network's deliveries are not distributed by Nielsen. According to SNL Kagan estimates, CBSSN closed out 2017 with a base of 56.1 million subscribers, making it available in just 47 percent of the country's 119.6 million TV households. For the sake of comparison, the Nielsen-rated NBC Sports Network boasts some 83.9 million subs, good for a 70 percent penetration rate.

Along with the opening game, the CBS flagship also will carry the AAF's very first championship showdown, which will air during the final weekend in April. "We wanted the biggest possible reach with the highest quality partner," Ebersol said, adding that an alliance with CBS gives the AAF an in with "America's most-watched network for the last decade."

The games that will appear on CBSSN will be live-streamed for free via the league's app, which is currently in development. As the AAF is being developed with an eye toward serving the nation's 59 million fantasy sports enthusiasts, the app will be front-loaded with an integrated in-game fantasy element.

The roster of investors that are backing the AAF is another feather in the league's cap. While the AAF has not disclosed how much capital it has raised in the early going, among those who are funding the effort include Barstool Sports majority owner The Chernin Group, Peter Thiel's Founders Fund (Facebook, Lyft, Space-X) and the tech fund Slow Ventures, which boasts an investment portfolio that includes the likes of Pinterest, Slack and Blue Bottle Coffee.

Ebersol did not disclose how much money the AAF had raised or how much it would need to develop a professional-grade brand of football, saying instead that long-term commitments were more crucial to the health of the league than any initial influx of capital. "This is a long-term vision," he said. "If you're not committed to seven-to-10 years, you're not taking this seriously."

The first round of AAF teams and home markets will be announced next month.

Among the former NFL stars that will serve as senior-level player relations executives within the AAF include future Hall of Famers Troy Polamalu, Hines Ward and Jared Allen.

Also lending his expertise is former NBC Sports Group Chairman Dick Ebersol, who will serve on the board of the AAF alongside his son. The architect of NBC's Olympics coverage and creator of "Sunday Night Football," the elder Ebersol had been instrumental in working with McMahon to get the XFL off the ground back in 2001.

To his credit, Dick Ebersol was quick to recognize that the original XFL product left much to be desired. In a segment that was included in Charlie's 2017 ESPN documentary "This Was the XFL," Dick Ebersol acknowledged that a cast of NFL and CFL washouts given just a month to prepare for a full season of football didn't make for a terribly compelling product. "I thought we were going to deliver good football," he said. "I don't believe in my entire career in sports or show business, I was ever more wrong."