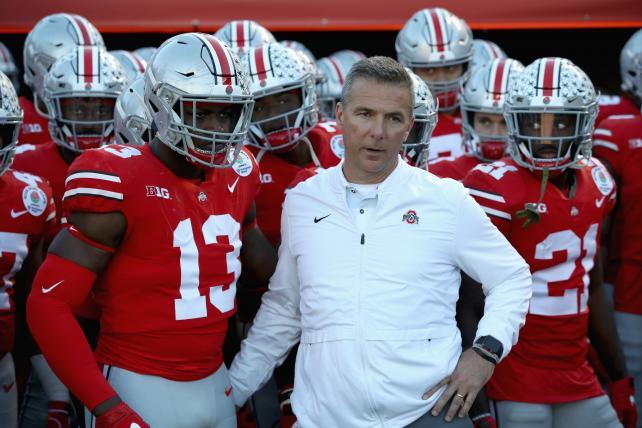 The untitled one-hour show will air Saturdays at 11 a.m. ET on Fox, where it will lead into the network's early college football broadcast. The new program faces formidable competition in the entrenched "College GameDay," which has aired live on fall Saturdays going back to 1993 and averages 1.8 million viewers each week on ESPN.

To put the "GameDay" deliveries in context, last season's telecasts out-rated 42 of the 44 college football games carried by Fox cable sibling FS1. So popular is ESPN's signature pregame show that it also managed to draw a larger audience than five of Fox's Saturday football broadcasts—two of which aired in primetime.

Fox is banking on network newcomers Meyer and Bush to help replicate the success it's had with "Fox NFL Sunday," the long-running studio show helmed by Hall of Famers Terry Bradshaw, Howie Long, Jimmy Johnson, Michael Strahan and host Curt Menefee. But there's no magic formula to ensure that the Saturday show will offer fans the blend of analysis and yuks the NFL team doles out on Sundays, and as none of them have previously worked together, there's no telling how the chemistry will work out between Meyer and Bush and Fox Sports veterans Brady Quinn and Matt Leinart. (Leinart appeared alongside host Rob Stone on the previous incarnation of Fox's Saturday show, and the two will team up again as part of the new five-man unit.)

For all his prowess with a headset and a clipboard—Meyer won a pair of national championship titles as the head coach of Florida and notched a third in 2014 with Ohio State—Fox's biggest new hire isn't exactly fizzing over with the sort of charisma that makes Bradshaw et al such a hit on Sunday afternoon. (Meyer hardly set the world on fire in his first on-air stint as an ESPN analyst back in 2011.) Nor is he a beloved figure outside of Columbus, and whether you chalk that up to tribal jealousy (he boasts a garish 0.853 winning percentage) or his mishandling of the Zach Smith situation, Meyer wouldn't seem to pose much of a threat to ESPN's Rece Davis, Kirk Herbstreit and Lee Corso.

Fox, naturally, sees things otherwise. "With a head coach that won three national titles in 10 years, two of the most successful college quarterbacks in recent memory and one of the sport's most electric running backs, our new college football pregame show has the game covered from all angles," says Mark Silverman, president of Fox Sports national networks. "Not only will this all-star cast resonate with viewers because of their recent on-field accomplishments, but this group is going to have a lot of fun discussing the games each week."

Meyer late last season announced that he would retire from coaching after the 2019 Rose Bowl, bringing to an end his seven-year run at Ohio State. This marked the second time Meyer stepped down from a marquee head-coaching assignment; back in December 2010, he told reporters he was leaving Gainesville in order to look after his health and spend more time with his family. After his brief stint at ESPN, Meyer agreed to take the Ohio State job less than a year after tendering his resignation in Florida.

While the new Fox pregame show largely will be confined to a Los Angeles studio, there is a plan in place for the production to pull up stakes next fall in order to venture on as many as four road trips. "GameDay" over the years has made a cottage industry out of rolling up to campus and shooting live in front of a throng of caterwauling college students, and the energy the show taps into while on-site has made for some compelling television.

As much as the itch to compete in the college football pregame space is a function of Fox's pivot to a broadcast schedule that will over-index on sports and live events, the network also hopes to take advantage of its amplified roster of games. Fox over the course of the season airs 35 games from three athletic conferences (Big 12, Pac-12 and Big Ten), the latter of which is responsible for the network's highest college football ratings. Per Nielsen, the annual Ohio State-Michigan grudge match averaged 13.2 million viewers and a 7.5 household rating on the day after Thanksgiving, making it the second most-watched regular-season game behind only CBS' coverage of the SEC Championship game.

If replacing "GameDay" as the default setting for fans is going to require a whole lot of effort, Fox's pregame-show track record isn't to be trifled with. Along with "Fox NFL Sunday," which has been the most-watched NFL pregame show for 25 seasons running, the network also boasts an enviable production in its Emmy-winning Major League Baseball studio show.

As a broadcast network, Fox also enjoys a significant reach advantage over ESPN. According to Nielsen cable coverage estimates, ESPN is available in approximately 85.9 million U.S. households, or about 30 million fewer homes than Fox reaches. That coverage gap will be something that Fox will look to exploit as it begins negotiating with advertisers and a pool of possible presenting sponsors. Multiyear title sponsorships are where the money is; Home Depot invests north of $20 million each se ason to align itself with "GameDay."

Additional information about the new-look pregame show (including, one imagines, the title) and the particulars of the 2019 Fox college football schedule will be revealed at a later date. For the time being, Silverman says fans can expect the revamped studio show will "educate and entertain with the unique Fox attitude viewers are familiar with."