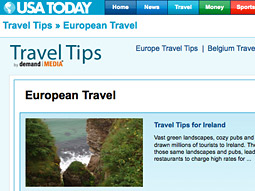 Demand Media, which is paying to generate the content and selling keyword advertising in the section, will split revenue with USA Today.
Readers can now find about 4,000 items from Demand Media freelancers on the new Travel Tips section of USA Today's site, including "Least Crowded Times to Go to Disney World," "How to Raft in the Arizona Grand Canyon" and "Travel Tips for Ireland."

Demand Media, the content studio and social media company that hired Yahoo sales chief Joanne Bradford to be its chief revenue officer last month, is paying to generate the content and is selling keyword advertising in the section. USA Today is selling its new display ad inventory. The two are splitting the revenue.

Traditional publishers have been getting more comfortable using original content from outside suppliers, egged on by simultaneous needs for new ad revenue and cheaper content. Last November, for example, The New York Times introduced a Chicago edition including local coverage provided by a new organization, the Chicago News Cooperative. And the Atlanta Journal Constitution gets a travel article a week from Demand Media, which itself has become a subject of increasing coverage in major media.

Cheaper content
"It is simply news companies understanding they've got to get their cost of content creation down," said Ken Doctor, author of "Newsonomics" and a news industry analyst at Outsell. "That is a huge driving force at the traditional news companies: They have got to get their content costs down. The traditional way of doing that is you do buyouts and layoffs, and we've certainly seen thousands of those. In general what these content farms are showing is there's another way to do this."

But The Times is relying on wholly human editorial judgment from the Chicago cooperative, which is led by a former managing editor of the Chicago Tribune and supported by public TV and radio stations. And the Atlanta Journal Constitution isn't relying on Demand Media's data-crunching to identify story ideas the way USA Today's Travel Tips section does -- much less picking up thousands of editorial pieces.

The USA Today section is a more significant effort because Demand Media is studying web searches and web-surfing behavior to identify potentially popular items, then assigning the stories and video to a much larger network of writers, said Dave Panos, CMO at Demand Media.

More like Reuters than a 'content farm'
Just watch what you call that network when you're around Mr. Panos. "'Content farm' is not a term we prefer, because it we think it has a negative connotation and that it paints a picture of a nameless, faceless organization that churns out low-quality, thoughtless content," he said. "This is not at all what we do. We think our studio bears a greater resemblance to larger, distinctive content-creation companies like Reuters. Our studio is made up of thousands of creative professionals, and each piece of content is touched by 11 qualified individuals with a high degree of editorial oversight. The result is carefully researched and thoughtfully written pieces of content that solve a specific need or answer a specific question."

USA Today hopes the site will draw a lot more traffic without putting new demands on its own staff. "We're not going to sit and write 4,000 'How to Travel with a Toddler' or 'How to Find the Best Airfare Deals' pieces, but that's the sort of thing people are searching the search engines for," said Victoria Borton, general manager for travel at USA today.

"We've got upwards of 15 editorial staff creating content, and they're going to continue doing what they do best, which is really enterprise features," Ms. Borton said. "And we have our experts on cruises, air travel and hotels, and, of course, our industry coverage. We're going to keep going as deep and broad as we can in those areas and let Demand fill in the gaps on that volume."