Wait, There Are Vending Machines Where You Can Buy Instagram Likes?

1. So what the hell just happened in the U.K.? Let's turn to the Beeb (the BBC): "Hung Parliament: Q&A guide to what happens when no-one wins the election." (Meanwhile, in case you're wondering, here's what the Biebs is up to.)

+ The Daily Beast's spin: "Wounded British PM May Limps Back Into Power."

2. So what the hell just happened in D.C.? Well, Rupert Murdoch's New York Post summed it up in one word: 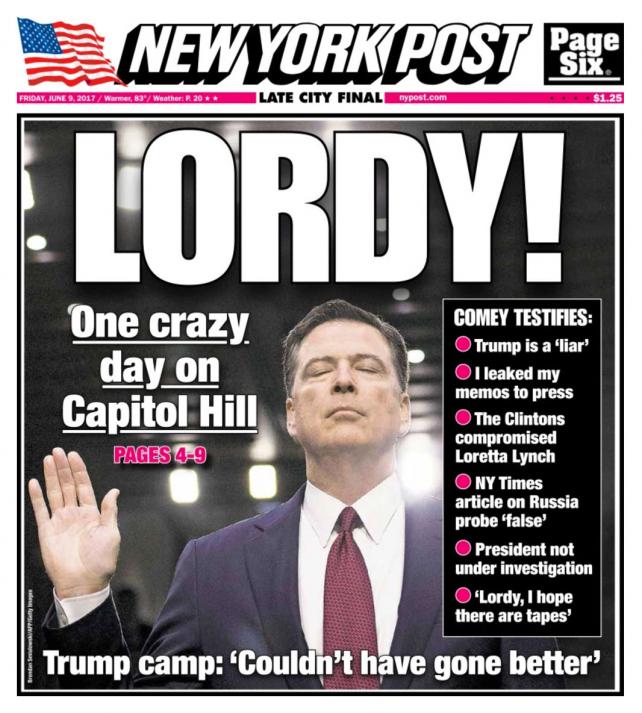 And, as my colleague Jessica Wohl put it, "Ah, the Daily News went with the other L word":

3. This McSweeney's "Lists" post by Nick Asbury really puts things in perspective: "Excerpts from James Comey's Opening Statement to the Senate Intelligence Committee or from Kazuo Ishiguro's The Remains of the Day?"

4. Also, because of course:

Despite so many false statements and lies, total and complete vindication...and WOW, Comey is a leaker!

Great reporting by @foxandfriends and so many others. Thank you!

Russia takes the worst excesses of capitalism to the extreme, so here's a vending machine in a mall for buying Likes for your Instagram pics pic.twitter.com/ZZt189opgd

There you go. My friend @vsonkin made a video of the Like machine in action. pic.twitter.com/v0EWkpGR3R

6. In advertising news, the pre-roll ad that ran for me (your results may vary) just before the video embedded in a viral Daily Mail post about a couple having sex on a Ryanair flight was for Olay Regenerist. "Prestige creams not living up to the hype? One jar shatters the competition. Olay Regenerist." Got that? Now go ahead and watch people fuck on a plane: "Was there no in-flight movie then? Stunned Ryanair passengers stare open-mouthed as couple romp on Manchester to Ibiza flight" (NSFW-ish).

7. And finally, to close out the week, I'm sharing this exceptionally delightful "Carpool Karaoke" segment, which has run up nearly 15 million views on YouTube since it was posted by "The Late Late Show With James Corden" on Tuesday. Be sure to watch for not only Ed Sheeran's duets with Corden, but for a stunt involving Maltesers and the stories Sheeran tells about growing up as "an unfortunate-looking kid" and recently smashing, yes, the Biebs in the face with a golf club.