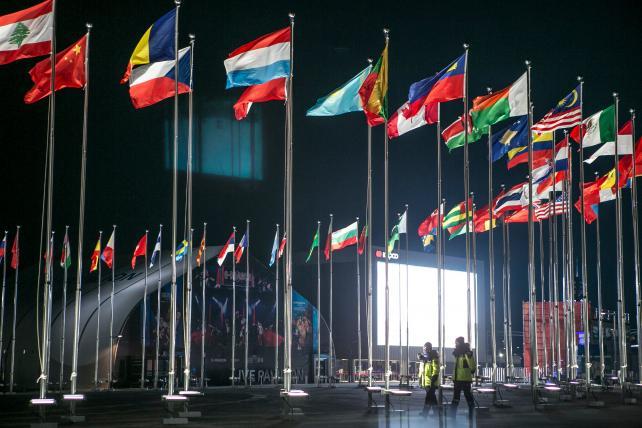 Police patrol in the medal plaza as national flags fly ahead of the Olympic Games in the Hoenggye-ri village area of Pyeongchang, South Korea, on Thursday.
Credit: Jean Chung/Bloomberg

Six-time medalist Bode Miller walks up to her crouched torso, pointing out the technical secrets of one of the fastest women on skis.

Such visual trickery in an augmented-reality TV studio is one of the tools that Discovery Communications is betting on to keep European fans glued to the Pyeongchang Olympics starting Friday. The games represent a moment of truth for the Maryland-based media company, a key holding of billionaire John Malone, as it seeks to make good on its $1.4 billion investment in the world's foremost sporting event.

NBC Universal has the rights in the U.S., where Discovery is known mostly for reality programming and documentaries. But in Europe, Discovery is a major sports broadcaster, airing soccer, car races and tennis matches through its Eurosport channels. Live sports are considered one of the few types of programming that keep viewers tuned in and willing to sit through advertisements, a tall order in the Netflix era.

"The Cube" studio is one of several innovations by Eurosport, the broadcaster acquired by Discovery in 2015, which will also have a virtual-reality app and is streaming every event of the games live on its digital service.

"We're trying really to push the envelope here," Jean-Briac Perrette, who heads Discovery's networks outside the U.S., said in a phone interview. "I feel great about our production, I feel great about the digital stuff we're doing."

The games mark the first big test of Discovery's Olympics project, for which it has the exclusive rights in Europe through 2024, as investors seek evidence that CEO David Zaslav has a winning strategy to compensate for stiff challenges in North America.

Akin to peers such as Viacom, NBCU parent Comcast and 21st Century Fox, Discovery is battling declining subscriber numbers and ratings amid fierce competition in the U.S. from the likes of Netflix and Amazon. Pessimism over cord-cutting helped drag shares of the owner of Animal Planet and TLC to a seven-year-low in December.

"They are placing a big bet on sports—they're all in," said Paul Sweeney, director of research at Bloomberg Intelligence. "Over time these can be good investments for Discovery, but investors are concerned about the costs of the sports and how they can monetize them over the long-term."

Discovery's main source of revenue from the Olympics is sub-licensing deals with other broadcasters. It has signed agreements with about 40 partners, including Germany's ARD and ZDF, Ireland's RTE and Italy's RAI.

Discovery expects the games to be profitable over the eight years for which it has the European rights, Perrette said. "We feel good about that," he said.

A key challenge in Pyeongchang will be maximizing ratings when traditional TV viewership isn't growing and when winter-sports fans in much of Europe face a nine-hour time difference with South Korea.

One response to such hurdles is Discovery's Eurosport Player, a streaming service that will show every moment of the games live and on-demand. Eurosport is offering the product free on a five-day trial in most of its European markets.

Gathering sign-up data from the player will be one of the big benefits of the games, Discovery Chief Financial Officer Gunnar Wiedenfels said on a conference call in November.

"We really see this Olympics event as a sort of kickstarter or a booster for our ability to deliver targeted advertising and data-driven products into the audience," he said.

Eurosport also partnered with Facebook Inc. to share daily highlights and interviews with fans in Europe, while using a first-ever mobile digital studio to move between venues and produce short-form clips for social media.

"The whole Winter Olympics is a great opportunity to use technology to tell the stories better," Peter Hutton, head of Eurosport, said in a phone interview from Pyeongchang. "We want our coverage to reach more people on more screens than ever before and engage new and younger audiences."