And the Winner Isn't: Oscars Put Up Historically Low Ratings 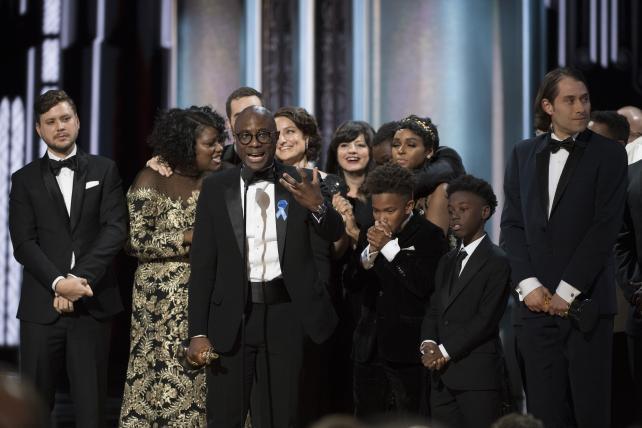 Director Barry Jenkins, surrounded by the cast and crew of 'Moonlight,' accepts the Oscar for Best Picture at the 89th annual Academy Awards.
Credit: ABC

The jaw-dropping conclusion to last night's presentation of the 89th Academy Awards wasn't enough to defray an ongoing ratings slide, as the three-hour-and-33-minute ceremony delivered one of the smallest Oscars audiences in modern TV history.

According to Nielsen live-plus-same-day data, ABC's broadcast averaged 32.9 million viewers, making it the second least-watched Oscars since the 2008 show hit bottom with a draw of 32 million viewers. More tellingly, Sunday night's broadcast delivered just a 9.1 rating in ABC's target demo, which works out to 11.7 million viewers in the 18-49 demo. By comparison, the 2016 Academy Awards drew a 10.4 rating, while the low-turnout 2008 showcase scared up a 10.7 in the demo.

Targeted viewers were down 13% compared with last year's broadcast, and while ABC is not on the hook for makegoods -- as with the Super Bowl, ratings guarantees are not furnished to advertisers who buy Oscars inventory -- the declines are likely to play a role in next year's unit pricing. (As it happens, this year marked the first time since 2010 in which ABC's average price for a 30-second slice of airtime dropped compared with the previous year. According to buyers, the going rate for a :30 in this year's show was around $2 million a pop, down from $2.1 million in 2016, although some units fetched higher rates.)

Despite the disappointing turnout, the Oscars remain the biggest award show on TV. By comparison, the No. 2 gowns-and-hardware spectacular, CBS's broadcast of the 59th Annual Grammy Awards, averaged 26.1 million viewers and a 7.8 in the 18-49 demo just two weeks ago.

In terms of overall reach, the 89th installment of Hollywood's annual celebration of itself nearly doubled the season's most-watched episode of scripted TV. According to Nielsen, CBS's Jan. 5 broadcast of "The Big Bang Theory" delivered 16.8 million live-plus-same-day viewers.

As is generally the case, ABC's Oscars broadcast should finish the season ranked first among all general-entertainment programming. Throw football, baseball and politics back into the mix and the ceremony will end up among the 2016-17 campaign's top 15 broadcasts, trailing only the Super Bowl, five NFL playoff games, Fox's Thanksgiving afternoon special, Game 7 of the 2016 World Series and the fall presidential/VP debates.

While viewers on the left coast may have been awake to bear witness to Warren Beatty and Faye Dunaway mistakenly awarding the Best Picture trophy to the producers of "La La Land" rather than rightful winner "Moonlight," many in the easternmost quadrant of the country had already called it a night well before the snafu. Between the 9-10 p.m. and 10-11 p.m. hours alone, ABC lost some 5 million viewers, and the churn rate only intensified in the show's final hour.

If Jimmy Kimmel's first crack at the Oscars was marred by the usual mid-show bloat, the Academy of Motion Pictures Arts and Sciences effectively doomed ABC's chances of pulling out of its ratings tailspin when its members voted for yet another slate of wall-to-wall art house films. Since its release on Oct. 21, Best Picture winner "Moonlight" has taken in just $22.3 million in box-office receipts, making it one of the smallest draws in the history of the Oscars. Other boutique films in contention included "Hell or High Water" ($27 million), "Lion" ($42.8 million) and "Fences" ($56.5 million), while the nominated release with the biggest box-office clout was "Hidden Figures," which has generated $152.8 million in domestic ticket sales since it hit theaters in December.

Compare all the above results with the $529.5 million in stateside sales "Rogue One: A Star Wars Story" has scared up in its 10-week theatrical run and it's a wonder that the Academy can't seem to see their way clear to devoting one of the Best Picture slots to a film with massive popular appeal.

While the smaller pictures deserved all the praise that was heaped upon them in the run-up to the Oscars, it's also likely that giving a nod to the latest "Star Wars" blockbuster would have helped ABC reach a far broader audience. Precedent backs up this assertion; at the time of the 70th Academy Awards, James Cameron's "Titanic" had already earned $338.7 million in domestic box office, making it the biggest money-maker in Oscars history. Not surprisingly, the movie's popularity translated to boffo TV ratings; the 55.3 million viewers who tuned in set a record that has yet to be broken.

The converse holds true as well. In years when a smaller film wins Best Picture, ABC's ratings are concomitantly reduced. The night "No Country for Old Men" took top honors in 2008 coincided with the aforementioned record low turnout of 32 million viewers, and other passion projects like the silent movie "The Artist" (39.4 million viewers in 2012) and last year's "Spotlight" (34.5 million) also failed to crack the 40 million mark.

On the advertising front, most of the usual suspects were in the house, as Cadillac, AT&T, McDonald's and Samsung were among the night's top spenders. Walmart stepped up in a big way, elbowing aside one-and-done Kohl's to serve as the exclusive retail sponsor of the Oscars. Walmart aired three high-concept spots helmed by directors Antoine Fuqua ("The Magnificent Seven"), Seth Rogan and Adam Goldberg ("Superbad") and Marc Forster ("Monster's Ball"). Meanwhile, conspicuous by its absence was longtime Oscars backer American Express, which was a no-show for this year's ceremony.

Other Oscars advertisers included Verizon, Google, Rolex, General Electric, Stella Artois, Geico and The New York Times. Revlon and Neutrogena were the sole representatives of the once ubiquitous beauty/cosmetics category, which largely has been underrepresented ever since L'Oreal bowed out of the broadcast back in 2009.