The friendly family that has made ABC's "Modern Family" so successful could soon fall prey to rampaging hordes of flesh-eating zombies. 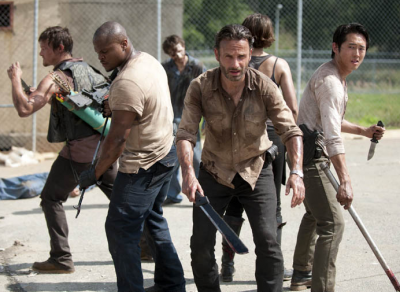 The cost of ad packages for the third season of AMC's "The Walking Dead" -- a dark, violent series about survivors making their way against hordes of zombies in a surreal, post-apocalyptic tableau -- hovered between $200,000 and $260,000 earlier in the year, according to two media buyers. And the network has been seeking as much as $375,000 for packages from so-called "scatter" advertisers who buy much closer to air time, according to an executive familiar with the tone of advertising negotiations surrounding the show.

Those figures suggest marketers value "The Walking Dead" almost as much as they do some of the most expensive programs on prime-time broadcast TV.

That's partly because total audiences for first-run episodes of "Walking Dead" this season have come in between 9 million and 11 million people, reaching milestones normally reserved for the broadest of TV's scripted fare -- along the lines of "Modern Family," which reached 12.2 million people last week, according to Nielsen, or Grey 's Anatomy, with around 9.7 million.

The reach of "The Walking Dead" this season among viewers from 18 to 49 and men from 18 to 34, moreover, is proving "really only second to football at this point," said Brian Hughes, senior VP and audience analysis practice lead at Interpublic Group's Magna Global.

Advertisers appear willing to pay all but football-like prices for the program. At even $200,000, a package of ads around "The Walking Dead" is priced higher than a 30-second spot in such well-known boob-tube offerings as CBS's "NCIS:LA," ABC's "Revenge" or Fox's "Bones," according to Advertising Age's annual survey of prime-time ad costs. And a $375,000 price tag is more than most marketers pay for 30 seconds in any show on broadcast TV except NBC's "Sunday Night Football" -- which commands a whopping average of $545,142.

Desire for the zombie program would seem to turn TV convention on its head. Advertisers often swear they yearn for family-friendly programming that kids and parents can watch together -- stuff like "American Idol" and "The Voice" -- or high-quality fare that focuses on characters and dialogue, a la CBS's "The Good Wife" or ABC's "Nashville." And yet, here they are paying top prices for scenes of undead zombies sinking their teeth into human muscle and sinew.

"I think the show crosses over to many audiences: sci-fi fans, horror-film and horror-thriller fans and fans of 'out of the box' dramas," said Billie Gold, VP-director of buying and programming research at Dentsu's Carat. "People have always loved scary movies."

While that 's true, "The Walking Dead" uses its perch on basic cable to take things more than one step beyond the pale. Scenes of protagonists stabbing through zombie noggins with steel implements are not uncommon. Nor are visions of the zombies sinking their rotting teeth into fresh human tissue. In the show's first season, some of the heroes snuck past a large group of zombie "walkers" by dressing themselves in undead entrails and blood, hoping to mask their "live" scent from the mindless predators around them.

That's a pretty far cry from what you might see on "Parenthood."

Or is it? One cultural critic suggested "Walking Dead" isn't that different from the rest of the TV schedule. "Sure, it is a guilty pleasure to watch blood and shambling guts once in a while, but it is the interpersonal narratives of the show that give it its ratings ," said Brad Ricca, a fellow at Case Western Reserve University who teaches classes on popular culture and comic books. "Strip away the zombies, and it is the same drama of straining marriages, growing up, and family skirmishes. The only difference is every so often zombies show up and this 'family' shoots them with crossbows. 'Modern Family' is essentially the same thing: an extended family of misfits going through identifiable suburban crises." 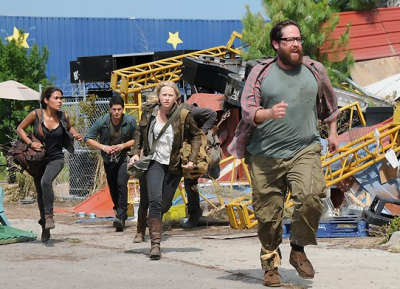 It's hard to imagine Phil Dunphy running from a pack of zombies on the sidewalks of the suburban enclave he calls home (though one could envision son Luke Dunphy trying to kill them). But other TV networks appear mindful of the success of "Dead." Indeed, the only new thing approaching the status of hit this TV season is NBC's "Revolution," a sci-fi serial centered on survivors in a world without electric power or modern conveniences. Advertisers are willing to pay an average of $97,133 for a 30-second ad on the program, which has reached an average of 5.9 million people between 18 and 49 in the season through Oct. 21, according to Nielsen.

There's more such stuff out there. FX recently launched the second season of its "American Horror Story." In 2013, NBC is set to unveil "Hannibal," a drama based on the cannibal psychiatrist Hannibal Lecter character from the popular books by Thomas Harris.

These programs may tap into a feeling that many consumers have in these days of a torpid economy and rampant job loss. "Audiences seem to be biting into escapist dramas," said Carat's Ms. Gold. "Maybe it has something to do with overpowering bad things around you."

Of course, these dramas may also overpower certain advertisers. According to one media-buying executive, conservative marketers -- such as those who sell packaged goods and food -- may not find "The Walking Dead" to be the most suitable home for their commercials. The drama appears to be getting much of its support from auto marketers, movie studios, video game makers, retailers and telecommunications advertisers -- sponsors who find strong support from younger consumers and aren't as concerned about the violence and gore that attracts them to the TV screen in the first place.