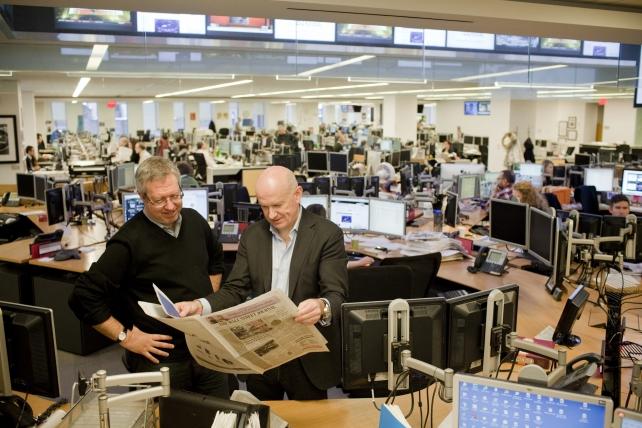 The Wall Street Journal is introducing native advertising to its website less than six months after Editor-in-Chief Gerard Baker described many publishers' moves in the arena as a "Faustian pact."

For those unfamiliar with German folklore, that's a deal with the devil.

Starting Tuesday, a box with headlines, subhead text and thumbnail images teasing content produced on behalf of the data and storage firm Brocade will appear in the middle column of WSJ.com and on the technology front page, situated between editorial headlines. Wall Street Journal's custom content division, part of the business side of the operation, produced the ads, which will exist in a separate section of the website.

The ads will be labeled as "Sponsor Generated Content."

Most large publishers have already adopted native advertising, but the Journal's effort marks a dramatic shift for a news organization that practically obsesses over the way ads are labeled on its site, according to former staffers. WSJ Custom Studios has created content on behalf of advertisers, but this marks the first time that sort of work will reside among editorial content, in the so-called "native" fashion.

It also comes after the Journal's parent company, News Corp., split from the more lucrative 21st Century Fox and became a standalone public company. Ad revenue for the Journal both domestically and globally declined by percentages in the low to mid single digitals in the most recent quarter, the company said in an earnings call last month.

Mr. Baker was in Asia last week and unavailable for an interview. In a statement, he stressed that the native ads were clearly and thoroughly labeled. "I am confident that our readers will appreciate what is sponsor-generated content and what is content from our global news staff," he said.

Trevor Fellows, head of global media sales at The Wall Street Journal, said actually blurring ad-edit lines would be "absolutely a Faustian bargain" but that readers won't be confused in this case.

"The audience has to know exactly what it's reading," Mr. Fellows said. "We knew that we wanted to develop much more strategic and custom solutions for advertisers. What he [Mr. Baker] absolutely didn't want to do is put something out that was indistinguishable from edit. And I agree."

The nation's top newspapers are carefully embracing native advertising despite reservations from some in the editorial ranks. The New York Times rolled out its own native ad units in January. Its executive editor, Jill Abramson, had earlier expressed some trepidation over such ads. USA Today is also planning a native ad product. The Washington Post began selling native ads last year.

"Everyone follows the leader to some extent," said George Janson, managing partner and director of print for GroupM. "Advertisers are looking for new ways to break through," he added. "Newspapers are trying to get a bigger piece of the pie."

Marketers are expected to spend $2.29 billion on sponsored content, including native ads, this year, a 20.5% increase over 2013, according to eMarketer. By 2017, the tactic is forecasted to hit $3.2 billion.

Marketers want to work with publishers on native advertising partly because it gets their messages closer to the editorial content readers have arrived to consume. And publishers are not just offering it up; they're carving out new departments to produce the content, whether they're text articles, infographics or videos.

"The reality is that the days of advertisers just wanting placements are long-gone," said Mr. Fellows, who joined the Journal from Bloomberg last October. "I think there is a really important role for traditional advertising, but I think every advertiser knows they need to augment that with content."

The Brocade campaign consists of 12 articles about technology and data. Mr. Fellows declined to comment on the amount Brocade spent on the campaign but said the price tag for native ad campaigns could reach into the high six figures or more (though media buyers cast some doubt on whether marketers would pay that much).

"This underlines a fundamental shift from media companies in the way we have to treat clients," Mr. Fellows said. "What I think has really changed is that clients expect you to be creatively excellent. You need sales people who can come up with feasible ideas and a team to execute it."

Alan Mutter, a newspaper consultant and author of the Reflections of a Newsosaur blog, saw little harm in the Journal's adoption of native advertising, which the paper is labeling "Narratives." Media organizations have long paired editorial content with ad messages, he said, whether in print advertorials or ads adjacent to similar editorial content.

"Consumers, for the most part, are sophisticated enough to know the difference between a journalistic effort and advertising messages, unless of course someone makes an effort to deceive them," he said. "But responsible publishers aren't doing that and won't do that."

"Publishers are doing the best they can to try to monetize their audiences at a time when they need the money more than ever," he added.