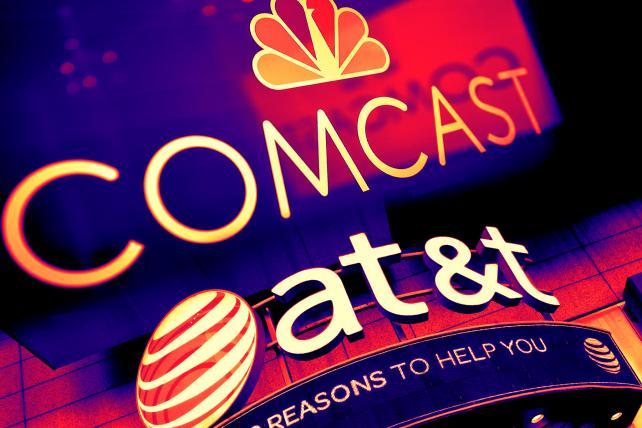 After a summer of dealmaking, AT&T Inc. and Comcast Corp. investors are looking for signs that the spending spree was worth it.

AT&T finally completed its $85 billion takeover of Time Warner in June, transforming itself into a media conglomerate. And Comcast is closing in on its $39 billion acquisition of Sky Plc, after overcoming a rival bid from 21st Century Fox Inc.

Both deals were meant in part to help defend against Netflix Inc., which just reported a huge surge in subscribers last quarter. AT&T and Comcast are the two biggest pay-TV providers in the U.S., so they're the most vulnerable to consumers ditching cable bundles and embracing streaming services.

With Comcast, AT&T and fellow telecom giant Verizon Communications Inc. all poised to report third-quarter results this week, investors will be seeking reassurance that their companies have adapted to the new realities.

One look at Netflix's growth, a surprising 7 million new subscribers in the third quarter, and it's clear what sort of pressure the nation's top pay-TV providers are under. At the halfway point of the year, AT&T had lost 474,000 satellite-TV customers and Comcast saw 236,000 subscribers leave, thanks in large part to Netflix, Hulu and the growing list of cheaper online viewing alternatives.

Comcast and AT&T have the most to lose in pay TV's shifting landscape, so it's probably no surprise that they have looked at acquisitions to bolster their businesses.

In addition to expanding geographically by picking up Sky's broadcast TV and studio operations in the U.K., Comcast has also juiced the speed of its landline network to help sell more super-fast broadband service here in the U.S. And last year, the cable giant started selling wireless service to customers, seeking deeper ties that foster more subscriber loyalty.

Comcast said on Monday that it would devote an extra half-hour during this week's conference call to discuss the Sky transaction.

Verizon, the largest U.S. wireless carrier, has been content to watch the megadeals from the sidelines. Under a new chief, Hans Vestberg, the company is redoubling efforts to expand its network and beat rivals out of the gate with 5G services.

For AT&T, the strategy to fight Netflix looks a lot like aping Netflix. Undeterred by the Justice Department's continuing effort to kill its Time Warner deal, AT&T has outlined big plans to offer content from its newly renamed WarnerMedia directly to consumers. Using popular properties like HBO, Turner shows and live sports as the main attractions, AT&T says it will start selling video packages online in late 2019.

"The theme is reinvention," said Amy Yong, an analyst with Macquarie. "They probably want to recreate a Netflix type model with an emphasis on sports content."

The bigger question from investors is what AT&T and Comcast will do to compete with FAANG, Yong said, referring to Facebook, Apple, Amazon, Netflix and Google.

Each of these tech giants has ventured, in some fashion or another, into video. In the case of Google and Facebook, they've also sucked billions in advertising dollars from traditional media like publishing, radio and TV.

By fortifying their businesses with more satellite and internet distribution while adding vast content libraries, AT&T and Comcast may have improved their chances, said Highmark's Lowenstein.

"An optimistic view suggests this will buy them time to adapt," he said.