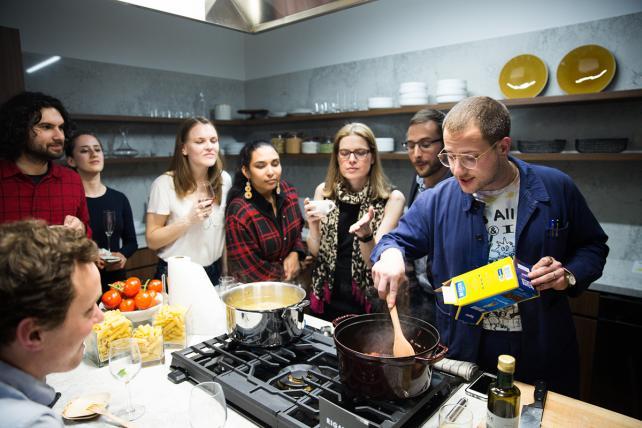 Under Editor-in-Chief Adam Rapoport, Condé Nast's venerable food magazine Bon Appétit has been on an extended hot streak. Since he took the helm in 2011, the title has been a three-time National Magazine Award winner (and a General Excellence finalist seven years in a row), a seven-time James Beard Foundation Award winner and has been one of Ad Age's Magazines of the Year three years in a row.

Bon App has also proven to be among the more nimble brands in the Condé Nast stable. It helps that the magazine is part of Condé's Food Innovation Group, which includes Epicurious, one of the very first foodie brands on the web. And it also helps that this past winter Bon App and its siblings opened a new satellite location called the Condé Nast Kitchen Studio (while still keeping space in Condé Nast's downtown Manhattan HQ) in Industry City, a gritty industrial section of Brooklyn that's become a hotbed for startups.

A year ago today, Bon Appétit launched Basically, a digital foodie brand for millennials. Rapoport put Digital General Manager Eric Gillin and and Digital Director Carey Polis in charge of launching the brand and tapped Amiel Stanek to serve as its editor. The thinking behind the vertical was pretty simple: "It's amazing how passionate twentysomethings are about food and restaurants," Rapoport tells me. "But that doesn't necessarily mean they know how to cook. We started Basically to teach them."

Last week, in advance of Basically's one-year anniversary, I sat down with Gillin and Stanek in the sunny, spacious Condé Nast Kitchen Studio, which includes two state-of-the-art test kitchens custom-built for photo shoots and videos—with appliances and cooking gear from sponsors including All-Clad, Crate & Barrel, Delta and Samsung—plus event spaces and workstations for more than a dozen editorial and business-side employees.

Gillin and Stanek talked about what they've figured out in the brand's first year.

Basically is all about visually-driven learning.

Gillin: You know, in terms of this space, I think the way that it really funnels into Basically is it's a place where cooking and visuals are intertwined. The traditional way to do food content is somebody develops a recipe not in a visual environment at all. And then that recipe is sort of triple-tested, made perfect, then you have a shoot, that recipe is made again, then if you want process shots, you have to do it again. 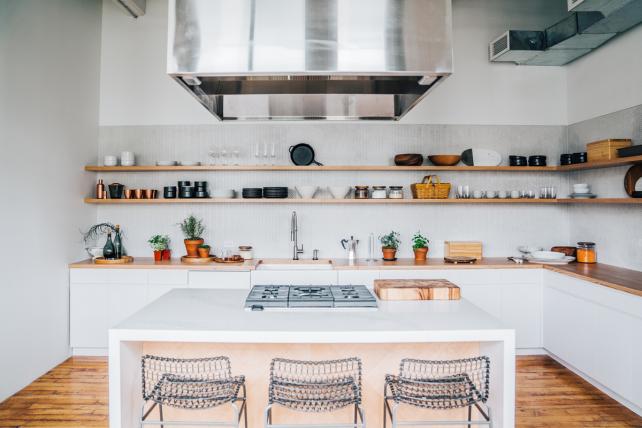 One of the two Bon Appétit/Basically test kitchens at the new Condé Nast Kitchen Studio.

With Basically having an environment like this, we can really focus on the moments in the process. There's a whole generation who are visually-led learners. This is an environment that is specially designed to kind of produce visuals, including videos, about cooking, not just finished products.

Stanek: We set out to make a food brand, a digital food brand, kind of for the Instagram age—for millennials, who are definitely more used to having content presented to them visually. [Basically's Instagram account is right over here, by the way.]

Gillin: It's funny, your grandma's recipe was, like, "butter, flour, sugar"—sometimes just a list of ingredients, no steps, no amounts, no quantities, because it was about the oral history. I think now we're moving to a sort of visual history—moving out of texts and into something new. That's kind of how recipes are evolving. So we see Basically on that kind of continuum as well, where this is a reinvention of the recipe for people with phones—as opposed to people with books, or grandma around.

Mobile consumption for Basically is well past 50 percent—close to 60. And the experience and the time spent for someone on the phone for Basically is way higher than what preceded it. So people are spending a lot of time in that experience. And they're also spending a lot of time, you know, purchasing things. There are 'buy' links throughout the recipes to help people pick up that chef knife or that colander or a peeler that they may not have. So we find that close to two percent of the people who hit our recipes are actually clicking the links to see the products that we recommend, that they can buy.

Gillin: Bon Appétit, the print magazine, tends to be a little bit more aspirational. Basically is about what can be achieved. So Basically recipes have 10 ingredients or less. In the studies we did, we found out that people equated the number of ingredients with how hard a recipe was. So the fewer the ingredients, the better. And those ingredients need to be found in a supermarket. The recipe needs to be achievable in 45 minutes or less. And we're going to show every single step—and all of the ingredients and all the products that you need. It's like post-language. Someone can just sort of look at all the visuals, almost like IKEA instructions, and figure it out.

Stanek: The part of it that really excites me as, you know, a nerdy liberal-arts kid, is the fact that with traditional recipes, the way they're written, with a chunk of text with ingredients, you don't actually get to be super intertextual and have people go down a rabbit hole while they're reading a recipe if they want to. Like, if we're introducing what could be a new ingredient for somebody—like miso paste. You know, if you're looking at a Basically recipe, and it's the first time that we've introduced miso paste, then there's going to be a hyperlink there that goes to a whole explainer on it. So for that person who's on their phone or maybe sitting at their desk looking at this recipe, trying to figure out what they're having for dinner, we want them to have, like, six tabs open if they want to, to really be able to learn the ins and outs of that recipe.

Gillin: Clearly some of the idea for Basically has its genesis in the hands-and-pans Tasty-style video. But you can't really learn to cook from those. It tells you a very compressed story of how brownies get made. I think we took, you know, the top-down nature of the hands-and-pans approach, and the clarity. But Basically recipes are a little bit chiller. They're more explanatory.

Stanek: Totally. Like, this is what "golden brown" looks like. This is what we mean when we're saying "deglaze." 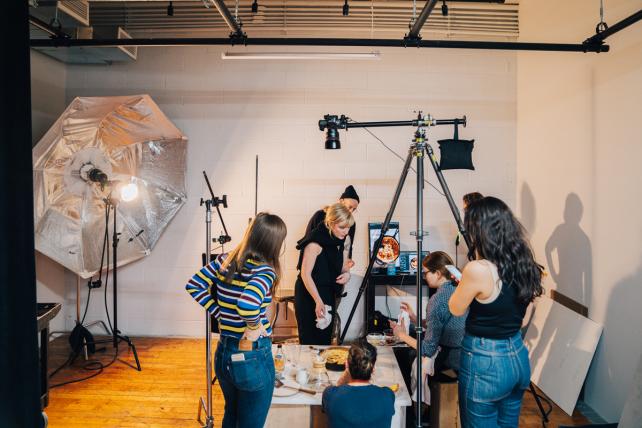 Behind the scenes at a shoot.

Search is not a dirty word.

Stanek: It's also cool how much search is a part of our equation, too. For me, my background is in print. And I feel like for print editors, SEO kind of feels like a dirty word or something—you're compromising your content, your ideas, whatever. And when I really started to understand what search and SEO meant for Basically as a brand, I was like, "This is incredible!" You know, when you make a magazine, you're just trying to figure out, "What do people want? What questions are there? Do people need this or know about this? They want it, right?" And now I can literally just look at a spreadsheet and be like, "Oh, really, that many people don't know what broccoli rabe is?" We would never write an article for Bon Appétit—print Bon Appétit—explaining what broccoli rabe is. So to me, from a service-journalism perspective, it feels like such an exciting gift to actually know what people want to know.

Stanek: I think one thing I was kind of surprised by—I mean, delighted by, actually—is that we started Basically with that extremely clean, extremely IKEA-manual sort of model—like, fundamentally a straightforward service product. And what we're finding is the things that people really respond to are the very personality-driven pieces. People want to read stories of people on staff, and what their lives in cooking are like, what kind of products they're using, why they love certain ingredients. We're finding people are really responding to that kind of thing.

Gillin: One thing I think we got wrong is we were doing two recipes per week to start [in addition to other non-recipe-centric stories throughout the week], and that's a lot—you know, that's shooting the videos and the stills and everything else. And we quickly realized that we could go just as far by doing one recipe a week. I think it gives the reader the chance to keep up with what we're doing. Sometimes on the internet, there is this idea to, like, flood the zone with as much content as you can, because more can mean more traffic. But "less" is about focusing on the personalities and packing that one recipe with information that's great.

Another thing we screwed up was a process thing. We thought that we could use video stills as pictures, because we're shooting in 4K. But the the food never quite looked delicious. So we actually had to go back and shoot. Properly food-styled shoots.

Stanek: It made such a difference. You know, if you look at it and you're not like, "I want to cook that," you're not going to read the recipe.

Gillin: It also took us a long time to get the color values in the video right, because video tends to run a little on the cold side. You know, like all these little things. It's been fantastic to launch a product and to make a lot of micro-fails that don't ruin the overall thing, right? And some of the things that we were doing from the start work. So if you look at the actual design of Basically, you know, we kind of sat down and said, the internet is a really, really noisy, loud, kind of crappy environment. So with the Basically homepage, if we're really going to be teaching you something, it's one piece of content. Time spent is now twice as high for Basically recipes as they are for a standard internet recipe. And that's really hard to do.

We kind of tried to slow down the internet a little bit and show you one thing at a time. Giving it room to breathe. And it's worked.

P.S. If you're in the New York area, you can see the Condé Nast Kitchen Studio in person and learn how to cook via a new event/class on August 2 called Basically IRL:

Wanna learn to carbo-load like a pro? Introducing Basically IRL, a new cooking class series that's actually, well, fun. We're kicking it off with an evening focused on the only thing we actually always want to eat: PASTA! Here's the deal: sip cocktails from our Very Official spritz bar, hang with Basically editors, snack on some of our favorite recipes, and learn how to make the perfect carbonara, vodka sauce, and more. Head to the link in our profile for tickets.