What Comey's Firing Does to the Trump Brand 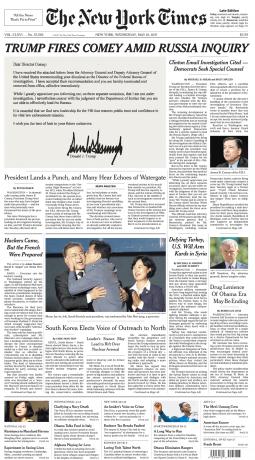 At first glance it appears as if The New York Times has put an electrocardiogram on today's front page. Is the nation having heart palpitations over President Trump's firing of FBI Director James Comey? (Does the Trump presidency count as a pre-existing condition?) But actually that's just Trump's signature below the full text of his letter sacking Comey. At last! Something in the "failing New York Times" that POTUS can't dismiss as "fake news"! Anyway, let's get started with today's special edition of your media scan, which considers the optics surrounding Trump's ouster of the FBI chief:

1. It instantly, of course, creates a Nixonian aura around Trump. Right on the front page of this morning's Times, just below the main banner-headline story, is a "news analysis" by Peter Baker headlined "President Lands a Punch, and Many Hear Echoes of Watergate" (web version: "In Trump's Firing of James Comey, Echoes of Watergate"). A quick review of Google News sources suggests that basically every major news outlet is invoking Watergate and engaging in a debate about the parallels. It's worth noting here that the Nixon Library does not appreciate the comparison:

Bonus: For those who weren't around for Watergate and/or weren't paying terribly close attention in high school history class: "What was Watergate, and why are Democrats comparing Donald Trump to Richard Nixon?," via Britian's Daily Telegraph.

2. To Trump loyalists, it makes the president seem ... judicious. In a post titled "The Simple Explanation for Trump Firing James Comey When He Did" that appears on the Breitbart News homepage this morning, Senior Editor-at-Large Joel B. Pollak writes,

Why fire Comey now? The answer is simple. The day before, President Barack Obama's former Director of National Intelligence James Clapper repeated, under oath, what he told NBC News' Chuck Todd on Meet the Press on March 5 -- that he had seen no evidence of collusion between the Trump campaign and the Russian government. That gave the Trump administration the breathing room to dismiss Comey -- which it simply did not have before.

3. It only draws even more attention to the whole Trump-Russia thing -- despite the Trump administration's attempts to wish it (or lawyer it) away:

A wise person notes that this story got little attention today for variety of reasons. https://t.co/jgZPBnr4DK

4. In the popular consciousness, it creates the appearance of a none-too-subtle attempt by the president to obstruct justice. Per The Guardian's Jonathan Freedland in a post titled "If you'd got complacent about Trump, let Comey's sacking shake you out of it,"

It's easy to get diverted by the circumstances around the firing. The fact that the letter of dismissal was delivered by Trump's personal bodyguard, a move that comes with more than a whiff of Tony Soprano. Or that Comey learned he'd been booted out via the news alerts he saw flashed on TV screens while in distant Los Angeles ... Or that even senior White House staff had no warning this was coming. ... But to focus on any of these points, no matter how appalling, is to stray from the heart of the matter: that a president has sacked the head of the FBI in the midst of an active investigation into that president and his team. To the naked eye, that looks like obstruction of justice.

Or as Jimmy Kimmel put it in his monologue last night,

(Watch through the end of the segment for Kimmel's "Comey Is My Homey" tshirt line.)

5. It creates an anti-Trump snowball effect -- or, if you prefer a less icey metaphor: "Comey's dismissal may turn the anti-Trump wave into a tsunami." That's the headline of the story atop The Washington Post's "most read" chart this morning. The piece by opinion writer Dana Milbank includes this choice line:

This president may think himself unassailable, but Americans are seeing him for what he is: a tin-pot tyrant.

6. It has the potential to prompt the FBI to double down on the Trump-Russia investigation. Per a post by Politico's Josh Meyer and Darren Samuelsohn titled "FBI agents in tears as news of Comey's firing spread,"

While the FBI has been polarized since the election, Trump's decision will likely cause a "significant amount of backlash" within the bureau's rank and file, said David Gomez, a former FBI agent who led the Seattle field office until his 2011 retirement. "They're going to view this as a political decision that impugns not only the integrity of director Comey but of the entire FBI itself," he said.

"It's ill advised," Gomez added of Trump's firing. "It's a political thing that is going to, to use the vernacular, come back and bite him in the butt."

7. It makes Trump and his staff appear to be even more trapped in their own echo chamber. Per CNN Chief Political Correspondent Dana Bash:

Source w knowledge of wh discussions tells me senior officials did not think firing james comey would be a big political explosion.