Since taking its current form in 2002, the idea behind Ad Age's annual Magazine A-List has been to honor glossy titles that are not only doing great in print, but smartly building their brands beyond the page. What the 10 magazines on this year's list have in common is that, in many ways, they're as much digital companies as they are "traditional" media companies.

There's still something distinctly (and desirably) magazine-ish about their sensibilities, but they're much more than magazines. Our list is dominated by multimedia, multi-tentacled megabrands and creative titles charting fast courses in that direction.

And to those who doubt magazine-centric media companies as relevant vehicles circa 2013, take note: Many of the titles on our list are doing phenomenally well with the dead-tree divisions of the operations -- in several cases, achieving historic, fattest-ever issues thanks to support from marketers who recognize the enduring value of print.

10. Men's Fitness
Men's Fitness and Men's Health were both born in late '80s, but over the years Men's Health far outpaced its rival in newsstand, ad sales and editorial quality. Then, in 2012, Rodale had a falling-out with its star editor, David Zinczenko, who had helmed Men's Health for a dozen years. Naturally, he ended up as a sort of über-consultant to Men's Fitness, where he helped bring in a new crew (including old Rodale hands) to undertake a total-body makeover that many regard as Men's Health redux. Although Men's Health remains bigger, Men's Fitness is on a new tear, with newsstand up 20% in the first half and ad pages up 34% through October. 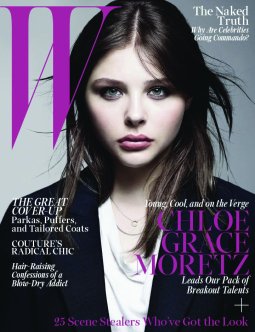 9. W
When we regard the challenges facing publishing, it's invigorating to also see the renewed success of W with an oversized, gorgeous print edition that exemplifies everything we always loved about magazines. Cashing in on the new consideration earned by Stefano Tonchi's editorial leadership since 2010, not to mention striking cover photos of Emma Stone in February and Tilda Swinton in May, W increased newsstand sales 23% in the first half of 2013. VP-Publisher Lucy Kriz, meanwhile, helped deliver the magazine's strongest first half advertising performance since 2008, according to Conde Nast. Ad pages are up 9% through October.

8. EatingWell
From its headquarters in Shelburne, Vt., upstart bimonthly EatingWell is finding its way into the national conversation about food and health. Readers and advertisers are buying in: EatingWell just increased its paid circulation guarantee to 750,000 from 600,000 to start the year and 350,000 when Meredith bought the magazine in 2011. The July/August issue is on course to sell 80,000 newsstand copies, a new best, according to the company. And ad pages through September were up 52%, according to the Publishers Information Bureau. But Eating Well is also finding growth elsewhere, striking content licensing pacts with health-care providers and brands like Dole Salads. Licensing now comprises a quarter of revenue. 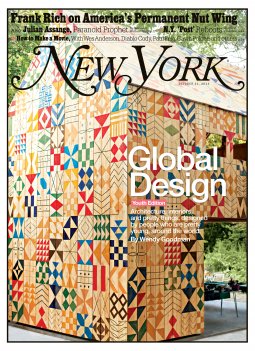 7. New York
This iconic 45-year-old title stands tall despite headwinds for weekly magazines that only seem likely to continue. New York won Cover of the Year from the American Society of Magazine Editors for its unforgettable "The City and Storm" issue of Nov. 12, 2012, then took home Magazine of the Year at the 2013 National Magazine Awards, an honor bestowed for excellence in both print and digital media. But New York has returned to our list particularly for its digital momentum. Its fast-growing spin-off sites Vulture and GrubStreet helped the whole collective achieve its biggest month yet for digital advertising in September.

6. Women's Health
It's been a very healthy year for this Rodale brand. Ad pages in the glossy magazine at the center grew a robust 32% through the September issue while digital revenue expanded by 40%. Creative programs like philanthropic fitness initiative Run 10 Feed 10 and the "Next Fitness Star" talent search, conducted with media partner "The Today Show," meanwhile delivered the Women's Health brand to fans in "real life." The title was a 2013 National Magazine Award finalist for General Excellence among Service and Fashion Magazines, and this year alone it added three more international editions, bring its global footprint up to 24 editions in 43 countries. 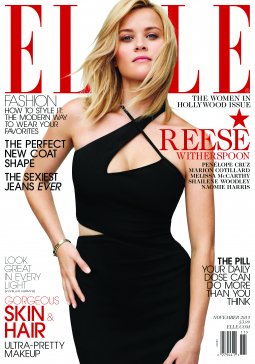 5. Elle
Elle is thriving on many fronts in 2013. It just published not only its thickest September issue yet but the biggest of any Hearst title. Its website likewise set a new high for monthly revenue not only at Elle.com but at any Hearst magazine site. And it is innovating with an eye on the future, this year introducing a weekly iPad edition and Elle Glassware, the magazine world's first venture into Google Glass content services. Just don't forget the quality content at the core. When a U.K. magazine declared a "Golden Age of Print Media" but only featured male editors, Elle Editor-in-Chief Robbie Myers became an outspoken champion of long-form journalism in women's magazines.

4. InStyle
One of only two brands to repeat from last year's Magazine A-List (our Magazine of the Year is the other), InStyle held on by trying new things. It rewarded iPad readers with a free download of a remix by June cover girl Selena Gomez, held a Twitter interview with new Twitter member and September cover star Drew Barrymore, and asked readers to vote for celebrity nominees in its new Social Media Awards. It introduced InStyle shoes at NineWest and the InStyle Perfect White Shirt online ("The only shirts to be sold by bra size"). And its March and September issues were each the largest for InStyle yet. November will be the 22nd consecutive issue with ad-page gains. 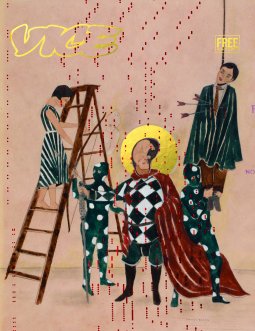 3. Vice
What started in Canada as Voice of Montreal in 1994 has now morphed into a Brooklyn-based, globe-trotting multimedia empire that can land a deal with HBO -- for "Vice," the Emmy-nominated documentary renewed this summer for a second season -- while also playing with the magazine-world big boys (Voice was a 2012 National Magazine Award finalist in the General Excellence category.) The print edition continues to thrive, with ad pages up and expansion to 24 international editions meaning global distribution of 1.1 million copies. But Vice's video content has earned more than 1.1 billion views today across Vice.com and other distribution channels, including the Vice channel on YouTube. That rapidly growing digital-meets-video-meets-cable content business is what fueled revenue reportedly north of $175 million last year, and prompted a $70 million August investment by 21st Century Fox that valued Vice Media at more than $1 billion.

2. Esquire
Print ad pages are up 18% through October, according to the Media Industry Newsletter, fueled partly, but far from entirely, by its October anniversary issue. The American Society of Magazine Editors nominated Esquire for four National Magazine Awards. The brand introduced a weekly iPad edition and tested a pay wall that charges readers for access to one story. It has also occasionally ignored sacred cows of print: Instead of the industry-standard photo of a celebrity, for example, its March cover featured just text. And Esquire Network, which kicked off with a two-hour documentary on the history of Esquire, is among the boldest brand extensions in the magazine business. 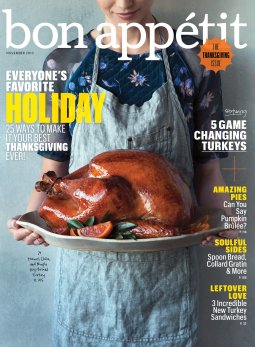 1. Bon Appetit
Four years after it survived Gourmet, Bon Appetit has taken on a new relevance, riding food's broader reach in the culture and giving culture a bigger hand in its coverage. This year, the magazine's ad pages through October have increased 21% from the period a year earlier, according to the Media Information Newsletter, with much of its new business coming from non-endemic clients such as Chanel, BMW and Chase. But print is only one part of the equation. A series of innovative partnerships between food clients and brands have brought the country's top chefs and restaurants off the pages and to live events in several cities. The magazine also introduced a redesign of BonAppetit.com that has catapulted its digital business ahead. "We're not just following the food trends," said VP-Publisher Pamela Drucker Mann. "We're making the food trends." 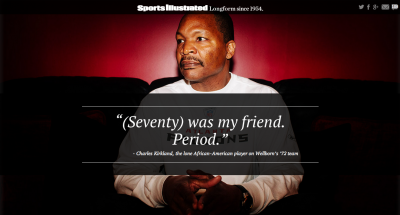 A screen from SI's immersive 'The Ghost of Speedy Cannon'

Sports Illustrated
It's been a big year for the new team of editors at SI, which both increased its newsstand sales in the first half and grew traffic to the website. Credit is partly due to the ever-growing Swimsuit franchise, of course, but also to its exclusive on NBA player Jason Collins' coming-out essay, which led to the biggest traffic day in SI.com history, and in-depth reporting like the series on Oklahoma State football. SI also built The MMQB for writer Peter King, explored daily live video with "SI Now" and developed new muscles for immersive storytelling online (albeit cleverly labeled "Longform since 1954").

Modern Farmer
Modern Farmer debuted in April as, it was safe to say, the slickest magazine around with a focus on agriculture. But the appeal of this niche quarterly extends well beyond a country farm, tapping into the increasingly popular topic of where the food we eat originates. Its first two issues have delved into the burgeoning organic movement in China and a gluten-free farm in Nevada while offering advice on farmer's market etiquette, tips on "growing a cocktail" and insights on fall's top agrarian fashion trends. Bill Clinton even lent some editorial heft to the magazine in a Q&A for the second issue. The combined effort has helped attract an array of advertisers, from Chipotle to Kioti tractors.

Wired
Wired introduced a print redesign with its June issue, part of new editor Scott Dadich's effort to make the title more lifestyle-oriented, and continues to expand in other arenas -- including digital, of course, where it now draws roughly 50% of its total revenue. With a sponsorship from Cisco, the magazine rolled out a crowd-sourced virtual magazine called The Connective that was created in just 48 hours. It has expanded its conference business into healthcare and jumped into the native advertising space with Amplifi, which aims to produce content on behalf of advertisers. And circulation to its excellent tablet edition has topped 100,000, making it one of only a dozen or so magazines to hit that mark.