'How to Switch a Country Off': Wired's New Cyberattack Cover Is Scary-Perfectly Timed | Ad Age
Skip to main content

'How to Switch a Country Off': Wired's New Cyberattack Cover Is Scary-Perfectly Timed

READ THIS NEXT
Choose your narrative: How the nation’s leading tabloids are addressing the mass protests and unrest

Today's accidental theme is ... print media. Seriously. Though faithful readers of this daily media scan know that it's not unusual for me to offer a glimpse of a newspaper front page or magazine cover now and then, it's downright freakish for print to dominate the mix like it does today. But hey, maybe that just makes sense given how yesterday we were reminded, once again, how fragile and vulnerable the internet really is. Anyway, let's get started ... 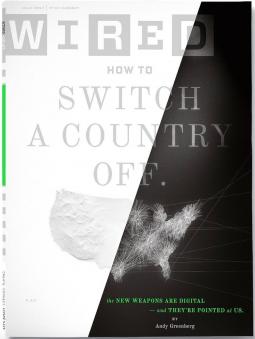 1. Last night, after a day dominated by the news of global cyberattacks (see Ad Age's coverage including "Cyberattack Paralyzes WPP" and "Pay Up or Lose Everything: What Madison Avenue Should Know About The WPP Ransom Hack"), I came home to find the July issue of Wired in my mail -- and I did a doubletake. Had my physical mailbox somehow been hacked to sync with the day's events?

The type on the cover reads "HOW TO SWITCH A COUNTRY OFF. THE NEW WEAPONS ARE DIGITAL -- AND THEY'RE POINTED AT US." But the riveting story by Andy Greenberg, posted online under the headline "How An Entire Nation Became Russia's Test Lab for Cyberwar," focuses on Ukraine. Greenberg writes,

In Ukraine, the quintessential cyberwar scenario has come to life. Twice. On separate occasions, invisible saboteurs have turned off the electricity to hundreds of thousands of people. Each blackout lasted a matter of hours, only as long as it took for scrambling engineers to manually switch the power on again. But as proofs of concept, the attacks set a new precedent: In Russia's shadow, the decades-old nightmare of hackers stopping the gears of modern society has become a reality. And the blackouts weren't just isolated attacks. ... A hacker army has systematically undermined practically every sector of Ukraine: media, finance, transportation, military, politics, energy. Wave after wave of intrusions have deleted data, destroyed computers, and in some cases paralyzed organizations' most basic functions.

It is absolutely a must-read.

2. Last night The New York Times sent out an email blast (it arrived in my inbox at 9:15 p.m.) subject-lined "After another cyberattack appeared to use leaked N.S.A. tools, security experts are demanding the agency help defend against its weapons" -- and it links to a story by Nicole Perlroth, Mark Scott and Sheera Frenkel headlined "Cyberattack Hits Ukraine Then Spreads Internationally" that also appears on the front page of the paper's print edition this morning. A key passage:

It started as an attack on Ukrainian government and business computer systems -- an assault that appeared to have been intended to hit the day before a holiday marking the adoption in 1996 of Ukraine's first Constitution after its break from the Soviet Union. The attack spread from there, causing collateral damage around the world. The outbreak was the latest and perhaps the most sophisticated in a series of attacks making use of dozens of hacking tools that were stolen from the National Security Agency ...

3. Speaking of front pages, the New York Post is delighting in the troubles at CNN -- a focus of yesterday's media roundup (see: "CNN's Retracted-Story Mess Just Got Way Messier"). This morning's Post cover: 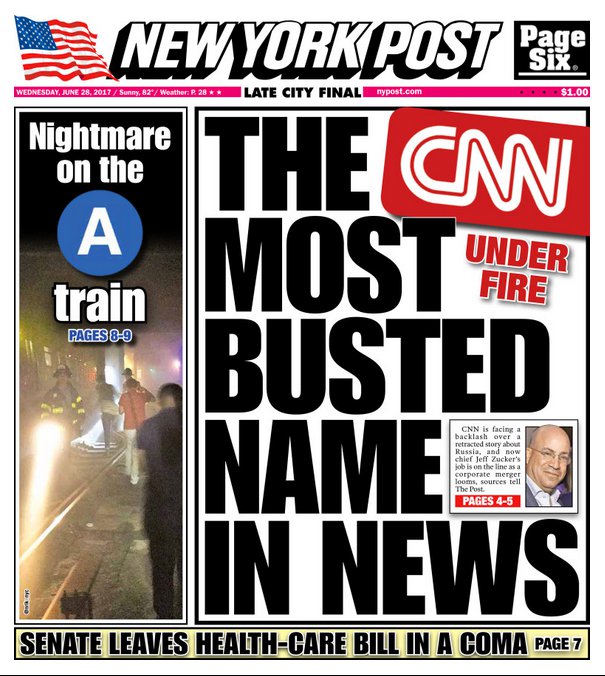 4. "President Trump's war with CNN took an even more personal turn on Tuesday," The Hill's Jonathan Easley writes, "after the White House used its press briefing to tout a hidden camera video calling the cable news network's coverage of the Russia controversy 'bullshit.'" ICYMI, the video was embedded in yesterday's media roundup.

5. But back to print. ICYMI, the cover of Vanity Fair's August issue:

You can now add "cover boy" to Zeke's resume. pic.twitter.com/DSS8r0Jzef

New & weird: at some @realdonaldtrump golf clubs, there's a framed copy of Time mag, w/Trump on cover.
It's fake. https://t.co/yrX2TJN0PJ

And then this happened:

UPDATE: @time has asked the @realdonaldtrump's businesses to remove the phony magazine covers from their walls. https://t.co/beJXOTrevb

Thanks to Jessica Wohl and Chen Wu for their roundup suggestions.