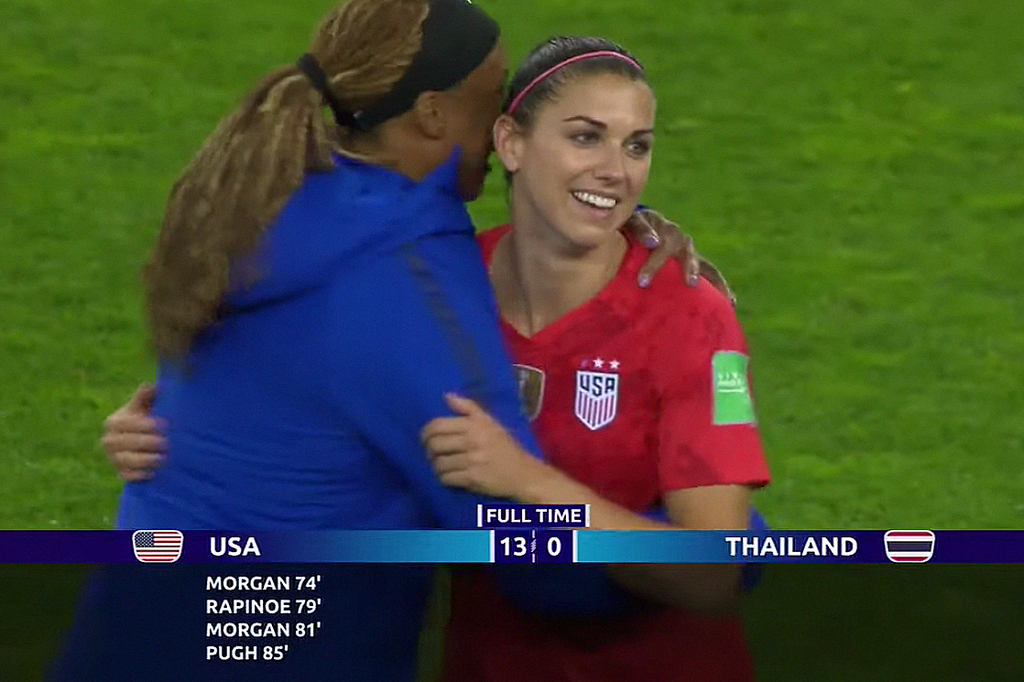 At some point during the U.S. women’s soccer team’s 13-0 demolition of Thailand, perhaps in the interval between Alex Morgan’s third and fourth goal, it became apparent that Fox was going to have a hard time keeping viewers from straying. The ruthlessness with which the Americans took apart their overwhelmed opponents was such that even diehard soccer fans could be forgiven for looking elsewhere for a fairer fight—say, Indiana Jones vs. the fancy guy with the sword in “Raiders of the Lost Ark” or Sonny Corleone taking on Carlo Rizzi in “The Godfather.”

If the USWNT in their first match of the 2019 Women’s World Cup all but chased viewers away from their TV sets—up 3-0 at the break, the defending champs would score another four goals in the first 10 minutes of the second half alone—the rout didn’t put an enormous dent in Fox’s ratings. According to Nielsen live-plus-same-day data, the two-hour broadcast averaged 2.63 million viewers and a 1.7 household rating, down 21 percent and 15 percent, respectively, compared to the analogous USA-Australia match in 2015. That group stage meeting between the U.S. and the Matildas averaged 3.31 million viewers and a 2.0 rating on the Fox cable channel FS1.

Fox streaming platforms on Tuesday added another 172,000 viewers to its linear TV average.

Through the first five days of the tournament, Fox’s metered-market ratings are up 6 percent compared to 2015. Along with USA-Thailand, three other matches have scared up 1 million viewers or more: Spain-South Africa, Norway-Nigeria and England-Scotland.

The superabundance of scoring aside, time zones and time slots arguably played the biggest role in Tuesday’s ratings squeeze. This year’s opener kicked off at 3 p.m. EDT, or 9 p.m. local time in Reims, France, while the 2015 match from Winnipeg began at 7:08 p.m. EDT, which means that half the game aired in primetime on the east coast. One of six Canadian cities to play host to the 2015 Women’s World Cup, Winnipeg is situated more or less at the longitudinal center of North America.

While the ratings for Fox’s first USWNT showdown didn’t match up to the network’s 2015 deliveries, the number of Spanish-speaking viewers soared. Telemundo Deportes’ coverage of the USA-Thailand match averaged 444,000 viewers, more than doubling Universo’s draw of 203,000 viewers four years ago, and setting a record as the most-watched Women’s World Cup group stage match in Spanish-language TV history.

Team USA’s next match pits it against Chile on Sunday afternoon. The squad faces its most formidable foe of group stage play on June 20 when it takes on Sweden. Should the USWNT win the group, it will likely face Spain in the round of 16; projecting even further ahead, the lethal host team could pose a significant threat to the title defense in the quarterfinals.

However things shake out, some commentators are already scrambling to cast the USWNT as the presiding Bad Guy of the Women’s World Cup. Clutching an invisible string of pearls, Canadian broadcaster and former player Kaylyn Kyle on Tuesday told TSN viewers that the exuberance displayed by Alex Morgan and Megan Rapinoe was “disrespectful” and “disgraceful,” before playing the old Maple Leaf card. “I’m all about passion, and I think, as a Canadian, we would just never, ever think of doing something like that,” Kyle said, apparently having already forgotten the grotesque spectacle of hundreds of Toronto Raptors fans cheering as Kevin Durant blew out his Achilles tendon during Game 5 of the NBA Finals.

Kyle’s selective amnesia is understandable, given that the Durant incident occurred roughly 20 entire hours before she savaged the U.S. team for their incivility. Of course, she wasn’t alone in her channeling of the town elders from “Footloose”; also performatively gnashing their teeth and rending their hair shirts were ESPN analyst and former U.S. player Taylor Twellman, who groused that the celebration of the later goals left a “sour taste.” Imagine the mouthful of lemons Twellman would’ve tasted if he’d realized that Morgan’s one-day tally of five goals matched the entire U.S. men’s team’s output of World Cup goals in the last 3,271 days.

Post-match Twitter also was rife with rather misinformed carping about the U.S. team’s decision to run up the score on a clearly demoralized opponent. But there is no such animal in international soccer; the rules of group stage play are such that advancement to the knockout round sometimes depends on the distribution of goals scored. If the U.S. had turned off the afterburners once it had notched its seventh or eighth goal and then Sweden turned around and beat Thailand by a 9-0 margin, suddenly the champs would be looking at a second-class berth.

For her part, Morgan on Wednesday told ESPN that she’s “happy just ignoring those comments,” noting that the USWNT would have been equally vilified if it had chosen to play keep-away from Thailand for the last 40 minutes of the match. “You can never have everyone love you,” she said in an on-camera interview. “That’s how it is.”

There’s no danger that Fox and its advertisers will fall out of love with Morgan and the rest of USWNT gang, especially if they make it all the way to the July 7 final in Lyon. When the U.S. topped Japan 5-2 in the 2015 title match, Fox’s broadcast averaged 25.4 million viewers and a 12.9 rating, making it the most-watched, highest-rated soccer game in U.S. TV history.