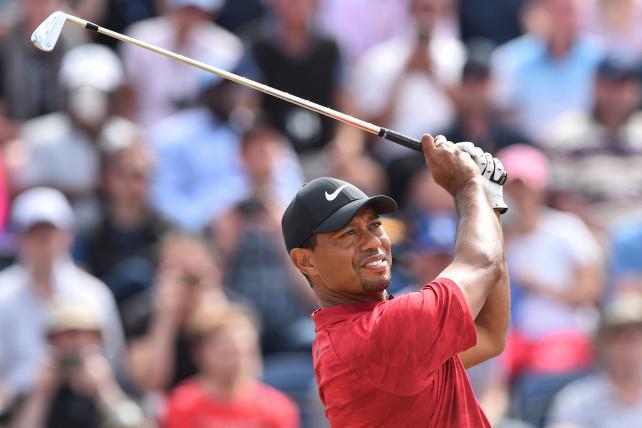 US golfer Tiger Woods watches his iron shot from the 3rd tee during his final round on day 4 of The 147th Open golf Championship at Carnoustie, Scotland on July 22, 2018.
Credit: GLYN KIRK/AFP/Getty Images

Tiger Woods made a whole lot of golf fans happy this weekend, as the 42-year-old duffer's Lazarus act during the final round of the British Open helped NBC deliver the biggest audience for golf's longest-running showcase in nearly two decades. And it's safe to say that advertisers were fairly chuffed as well.

According to Nielsen live-plus-same-day data, the resurgent Woods' strong Sunday morning finish in Carnoustie, Scotland was witnessed by 6.48 million TV viewers, making it the most-watched final round of the tournament since 2000. (Despite crushing the field with a record 19-under-par performance, Woods' first-ever British Open title that year drew 8.56 million viewers to ABC.)

Compared to more recent Open finals, Sunday's round was a staggering success. Per Nielsen, NBC's deliveries marked a 32 percent improvement compared to last year's broadcast (4.91 million viewers). Moreover, in drawing a 4.3 household rating, NBC laid claim to the Open's highest-rated final round since 2006 (4.6)—which, as it happens, coincides with Woods' last Open victory.

In finishing just three strokes off the lead behind Italy's Francisco Molinari, Woods came tantalizingly close to winning his 15th major, and his first since 2008. And while Molinari would end the day with his name etched on the Claret Jug, Woods' lethal performance on the front nine was further proof that the so-called "Tiger Effect" isn't just a chimera the network ad sales execs trot out whenever they want to close a big golf client. Case in point: In returning to the Masters for the first time since 2015, Woods this spring helped boost CBS's final-round deliveries 18 percent to 13 million viewers—the highest turnout since, well, 2015.

Woods this year has appeared in 22 rounds of nationally televised golf, of which all but one have posted year-over-year ratings increases. As for the 32 tournaments in which Woods did not participate, 53 percent, or 17 events, increased their ratings compared to their 2017 deliveries.

If the prospect of Tiger Woods playing a round of golf while decked out in his Sunday best (the inevitable black pants/red Nike polo ensemble) translates to ratings gold, NBC was doubly blessed by a stacked field. Among the world-class golfers in the hunt this weekend were defending Open champ Jordan Spieth, four-time major champion Rory McIlroy and Justin Rose, who is currently ranked No. 2 in the world.

Fan favorite Spieth entered Sunday's round in a three-way tie for the lead, but a bogey on the fifth hole and a double bogey on six sent the young champion into a tailspin. While Spieth was finding the rough and struggling on the greens, Woods was turning back the clock, playing a near-flawless front nine and momentarily taking the lead. The welcome nostalgia trip was short lived, however, as a run of bum luck on the eleventh and twelfth holes cost Woods three strokes just as his playing partner, Molinari, began turning on the jets.

Woods finished tied for sixth place. In a press conference after Sunday's round, Woods acknowledged that while his inability to secure victory in Scotland is "going to sting for a little bit," he's learning to keep things in perspective. "In the beginning of the year, if you had said, 'You'll be playing in the Open Championship,' I would have said, you know, 'I'll be very lucky to do that.'"

That was an understatement. A little more than a year ago, on the heels of a fourth surgical procedure to try and repair his ravaged back, Woods told ESPN's Scott Van Pelt that he might never play competitive golf again. Lumbar grievances aside, Woods also walks on a left knee that's seemingly held together with Silly Putty and upholstery staples. That he's able to play at all, let alone compete, is a testament to his indomitable will and relentless competitive streak.

Whether Tiger Woods will ever match Jack Nicklaus' 18 major titles remains to be seen, but as long as he remains eligible for Sunday golf, advertisers will want to share the spotlight with him. Among the markers who spent the most in order to bask in Tiger's reflected glory were Mercedes-Benz, Geico, Rolex, Pacific Life, Travelers, U.S. Bank, Farmers Insurance, Toyota and Volkswagen. According to iSpot.tv estimates, Mercedes racked up some 60.6 million impressions during Sunday's round, which works out to a very reasonable CPM of $25.60.

Callaway also got a fair amount of milage from the Open, as the golf gear brand throughout the four-day tourney was featured several times in NBC's "Playing Through" ad format. Designed to keep viewers plugged into the action on the links while giving the sponsor a chance to shill its wares to a highly-targeted audience of golf enthusiasts, the split-screen execution offered a window on the goings-on in Carnoustie on the left side, while Callaway spokesman Phil Mickelson warned viewers that one of his Chrome Soft balls was about to pass through their living rooms. After making contact, Mickelson marveled, "I can do anything with this ball."

The Mickelson spot was shot, produced and edited in-house by Callaway Media Production. Callaway's agency record, Carlsbad, Calif.-based Taco Truck, directed the spot. NBC Sports' Golf Channel premiered the "Playing Through" break in 2013, while Mickelson has been affiliated with Callaway going back to 2004.

Tiger Woods is scheduled to compete in the upcoming PGA Championship, which is set to air August 9-12 on TNT and CBS. The tournament notched its highest deliveries in this decade back in 2009, when CBS's coverage of the final round averaged 10.1 million viewers and a 6.6 household rating. After leading the field throughout the week, Woods fell to journeyman duffer Y.E. Yang.

Woods has not closed out a major in second place or better ever since.