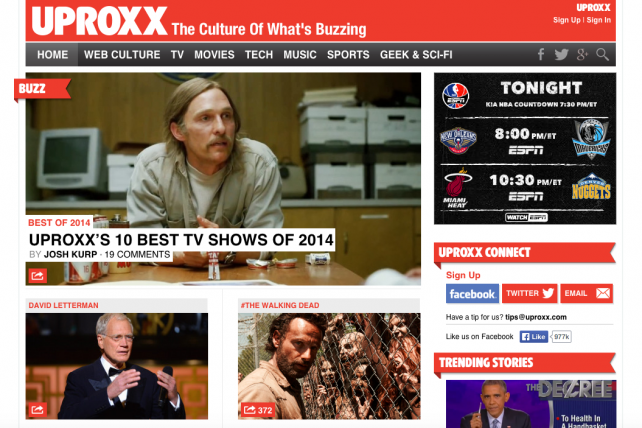 Another week, another digital media company with a big funding round.

Woven Digital has raised $18 million in the company's second funding round since its 2010 launch. Woven intends to use the funding money to add more people to its ad sales and editorial teams, grow its video business into eventually accounting for half of the company's revenue and develop its publishing tools to be better at trendspotting, according to Woven CEO Scott Grimes.

Up until now the millennial-male-skewing publisher has largely stayed away from taking outside money. It raised $5.5 million in seed money, but largely relied on its own revenue over the last few years to build its business and acquire other sites, Mr. Grimes said. He said that revenue has doubled each year for the last three years but declined to provide actual figures.

Now Woven has a lot more competition for Millennials' attention, and those competitors are taking in a lot of outside money to make sure that audiences and the advertisers chasing it are paying attention to them.

"We've been competing for such a long time with a pretty restrained attitude towards the whole thing because we've done it really capital-efficiently. So I'm excited to deploy some more money in areas of growth ... we've been experiencing. But definitely comparative to some of the competitors in our space, this is a drop in the bucket," Mr. Grimes said.

Mr. Grimes was referring to the combined $596.5 million that its rivals Vice, BuzzFeed and Vox Media have raised over the last few months. Those publishers are building up their war chests, and so must Woven.

Like those publishers, Woven runs news and entertainment sites that cater to 18-to-34-year-olds who are more accustomed to checking out Facebook than a newspaper. It owns entertainment site Uproxx, street-culture site Animal and men's interest site BroBible and sells ads on others' properties such as The Chive, Distractify, Cheezburger and basketball site Dime. Woven's own properties grew by 54% year-over-year to span 41.5 million unique visitors in the U.S. in October across desktop and mobile web, according to comScore.

Also like its competitors, Woven wants to make video and technology a bigger part of its business.

Woven's video arm, Woven Studios, already creates branded videos for marketers such as MillerCoors, Sony Pictures and Electronic Arts, but it's about to start producing its own programming as well. Next quarter Woven Studios will premiere its first three original series. Mr. Grimes said he expects video to account for 25% of Woven's revenue next year and event and hopes to grow the business to the point that eventually at least half of its revenue comes from video.

As for technology, Woven wants its publishing tool Thread to be in the same conversation as Vox Media's or BuzzFeed's lauded content-management systems. Mr. Grimes said the company wants Thread to be an all-in-one system for publishing articles and videos, paying contributors and analyzing traffic. It's 60% of the way there, and the remaining 40% involves crunching traffic and social data to be able to hop on stories right before they go viral. "We're looking to cover trending topics in a quicker capacity," he said. If successful at building that technology, he'd consider licensing it to other publications for yet another revenue stream.

Woven's lead investor Institutional Venture Partners should like that. The big-time Silicon Valley venture-capital firm has previously placed its bets on media-focused technology companies like Netflix, Twitter and Snapchat. IVP principal Somesh Dash will join Woven's board; he had been involved in the firm's investments in Netflix, Business Insider and Zynga.