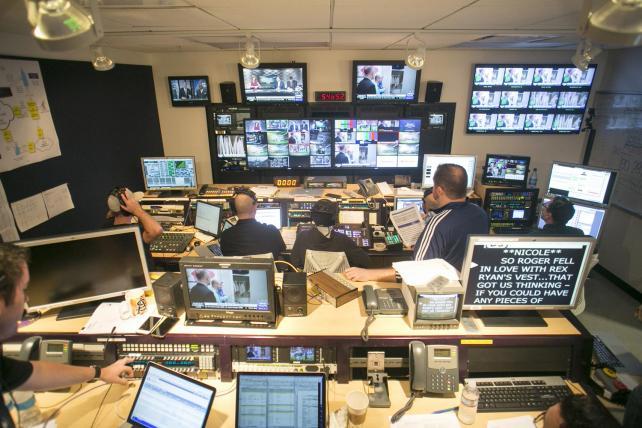 Behind the scenes at the NFL live stream on Yahoo.
Credit: Yahoo/Businesswire

The NFL's first foray into live-streaming one of its 256 regular-season games was met with the usual metaphorical gnashing of teeth and rending of garments, and while not every end user's experience was ideal, Yahoo's presentation of the Bills-Jaguars skirmish largely met advertisers' expectations.

The morning after Yahoo presented the first free, live internet broadcast of an NFL game, the relevant usage stats point to a qualified success. On the one hand, Yahoo out-delivered its audience guarantees, drawing 15.2 million unique views, or more than four times the 3.5 million deliveries it had promised advertisers. (By way of comparison, ESPN's "Monday Night Football" this season is averaging around 13.5 million live-plus-same-day viewers per telecast.)

According to the NFL and Yahoo, around 66% of those who logged on to the live stream were located in the United States, which works out to around 10.1 million domestic uniques.

All told, Yahoo served up 33.6 million streams over the course of the Bills-Jags game, a total that includes auto-play views captured on Yahoo.com and a number of the company's apps. In other words, users logging in to the Yahoo home page were immediately greeted with a muted live stream of the NFL contest, regardless of whether they were actively seeking out the game.

In aggregate, users were exposed to 460 million minutes of game play and advertising, with each unique viewer averaging 30.3 minutes of the broadcast.

While advertisers would seem to have reached an awful lot of eyeballs for a pittance -- at a unit cost of around $50,000 per 30-second spot, late-comers paid less than a tenth of what it costs to secure time in a national Sunday afternoon NFL broadcast on CBS and Fox, although the average rate was closer to $85,000 a pop -- most of the league's top sponsors sat out the inaugural live-streaming event. Disregarding the NFL's own spend on PSAs and self-promotion, the only top-10 sponsor to appear in the Bills-Jags stream was No. 4 Toyota. The automaker ponied up for a pair of 30-second spots and served as the sponsor of the halftime show.

Conspicuous by their absence were this season's top three NFL sponsors (FanDuel, Verizon and DraftKings), as well as leading insurance spender Geico, QSR giant McDonald's and beer titans Bud Light and Michelob. Yahoo's own daily fantasy sports portal was the lone representative of the burgeoning daily fantasy category, while Nationwide, the NFL's No. 3 spender in the insurance sector, was the most visible representative of its cohort. (USAA, which provides insurance, banking and investment services for members of the military and their families, invested in two in-game spots.)

Dairy Queen and CiCi's Pizza were the biggest spenders in the QSR field, while SABMiller's Redd's Apple Ale did all the heavy lifting in the beer/adult beverages category.

All told, the brand that made the most frequent appearance in the live stream was Kay Jewelers, which bought five 30-second units.

Advertisers who did kick the tires on the live stream enjoyed a relatively uncluttered environment, with most pods clocking in at around two minutes, or four spots per commercial pod. That's about the modest size and shape of the average between-innings MLB pod.

While Sunday Morning Twitter was alight with complaints about the picture quality and concomitant audio problems, the bulk of the carping seemed to dissipate midway through the first quarter. Despite streaming the action on a wonky iPhone 4S and an 8-year-old MacBook, our experience was uniformly excellent. There were none of the attendant latency or buffering issues that tend to plague even small-scale live streams, nor was the audio blighted by clipping, lagging, stuttering or echo. In this one particular instance, anyway, Yahoo offered a very crisp, sharp high-def feed of a very ugly football game.

A banged-up Bills team in the first quarter turned the ball over twice in rapid succession, leading to immediate touchdowns for the Jags. By the midway point of the second quarter, the Jags were up 27-3, which sent a good deal of the stateside audience (if not to say those on hand at London's Wembley Stadium) to head for the exits. And while Buffalo would make a game of it, there's a reason why both teams have the lowest profiles of any NFL franchises. (Per league rules, the absolute bare minimum number of appearances a team can make in nationally televised games is one, and the Jags and Bills perennially fall in that one-and-done category. Buffalo's national exposure was expanded with the arrival of former Jets head coach Rex Ryan; the Bills this season will appear in all of two national TV games.)

While relatively unobtrusive, the lone visual oddity that kept popping up during the CBS production of the broadcast was a function of the preferences of the Wembley grounds crew. As has been the case with previous NFL games hosted by the Brits, each team's end zone logo was rendered in spindly chalk outlines, which reduced the time required for clearing away the markings. Yet whenever the offense found its way in the red zone, the logos were filled in with digital "chalk" to better resemble field paint in the U.S. Sometimes within the space of a single play, the "Jaguars" brand would transform from a series of minimalist outlines to artificially augmented blocks of color, and back again. It was like watching someone with rather poor hand-eye coordination use Microsoft Paint for the first time.

The game was broadcast by local CBS affiliates in Buffalo and Jacksonville's home markets. Ratings for the linear telecasts will likely add another million viewers to the overall streaming deliveries.

Yahoo won the rights to stream the game back in June, with a $17 million bid. That the company enthusiastically embraced the free, ad-supported model rather than propose a pay-per-view structure gave it a leg up over rival suitors Google, Apple and Amazon.

~ ~ ~
CORRECTION: An earlier version of this article said the average ad price in the webcast was $50,000; that was the price for spots sold late in the process, but the average was about $85,000.