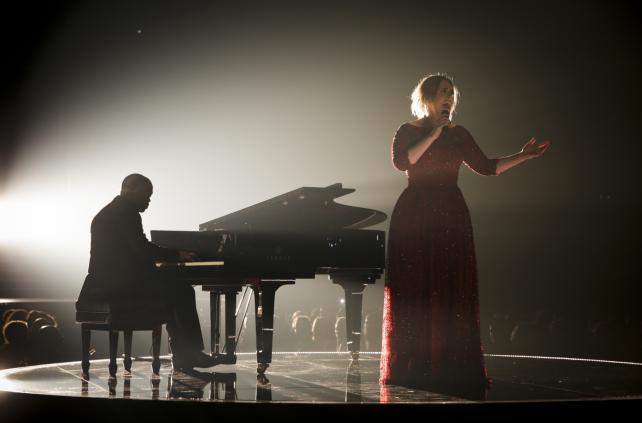 The overstuffed, overdone interval known as awards season appears to be losing its luster, as the latest big-ticket trophy TV franchise just posted its lowest ratings in recent memory.

According to Nielsen's time zone-adjusted fast affiliate data, CBS's broadcast of the 58th Annual Grammy Awards delivered a hair under 25 million viewers and a 7.7 rating among adults aged 18-to-49, marking the musical spectacular's weakest performance in the demographic since 2009. The 7.7 rating translates to 9.76 million members of the under-50 set, which works out to 39% of the overall Grammys audience.

The Grammys also drew a 9.1 rating among adults 25-to-54, which is shorthand for 10.8 million people in CBS's target demographic.

Last year's broadcast drew an 8.3 rating in the 18-to-49 demo, which itself was down 16% when compared to the 9.9 rating posted by the 2014 Grammys. This marks the fourth straight year of ratings declines for the broadcast, which in 2012 notched a staggering 39.9 million viewers and a 14.1 rating thanks in large part to a heartfelt tribute to singer Whitney Houston, who only the day before had been found dead in her hotel room at the Beverly Hilton.

The all-time record for a Grammys broadcast was notched way back in 1984, when Michael Jackson's "Thriller" sweep helped CBS scare up 51.7 million viewers. Per Nielsen, 45% of all TVs in use during the broadcast were tuned in to CBS.

In deference to a dual-holiday weekend complicated by back-to-back Valentine's Day and President's Day disruptions, CBS last spring decided to shift its big awards show from its customary Sunday night perch to a temporary Monday primetime slot. The 59th installment of the music industry's annual celebration of itself is expected to move back to Sunday night.

Other high-visibility sponsors were Intel, CoverGirl, Verizon, Bud Light, Android, MasterCard and Pepsi. As has been the case in recent Grammys broadcasts, marketers were quick to align themselves with popular artists. Intel's flashy 90-second spot featured Lady Gaga talking about her unwavering search for "new ways to create the impossible," while CoverGirl enlisted spokesperson Katy Perry lip-syncing the 1989 Technotronic track "Pump Up the Jam" and multi-hyphenate Zendaya and her just-released single "Something New."

Target also played a major role in Monday night's broadcast, as the retailer sponsored a four-minute live performance by Gwen Stefani. According to media buyer estimates, Ms. Stefani's debut of her new single "Make Me Like You" cost Target around $7.88 million, given an average unit cost of $985,000 for each 30-second increment of airtime. Target invested in a similar brand extension in last year's Grammys, sponsoring a four-minute performance by Imagine Dragons.

While the Grammys may have suffered from a number of high-profile no-shows -- Rihanna and Lauryn Hill apparently bowed out at the zero hour, while Kanye West declared that he wouldn't show unless he were awarded the Album of the Year honor -- it certainly is not the only awards show to face ratings declines. Fox's presentation of the 67th Prime Time Emmy Awards in September dropped 14% to a 3.6 rating in the 18-to-49 demographic, while NBC's broadcast of last month's Golden Globes dipped three-tenths of a point to a 5.5 rating. Even the Oscars has been on the wane of late; overall deliveries for ABC's coverage of the 87th Academy Awards plummeted 15% to 37.3 million viewers, while the household rating dropped 17% to a 20.6.