President Trump's hapless Helsinki summit with Vladimir Putin continues to get slammed by the right and the left, as crystallized by New York's tabloid newpaper front pages this morning.

Rupert Murdoch's right-leaning New York Post (above) goes with a "See No Evil" cover headline and "Prez gives big Bear hug to wicked BFF Vlad, jabs US intel" for the subhead. Inside the paper, coverage includes "Republicans, Democrats slam Trump for being soft on Putin."

Meanwhille, the left-leaning New York Daily News (below) goes with an even more provocative front page that features an illustration by editorial cartoonist Bill Bramhall and the headline "Open Treason." In a play on Trump's notorious January 2016 campaign-trail assertion about the loyalty of his fans—"I could stand in the middle of Fifth Avenue and shoot somebody and I wouldn't lose voters"—the president, shown holding hands with a shirtless Putin, shoots Uncle Sam at point-blank range on the Manhattan thoroughfare. The paper's coverage inside includes "Putin's poodle: Trump sells out U.S. intelligence agencies with the world watching." 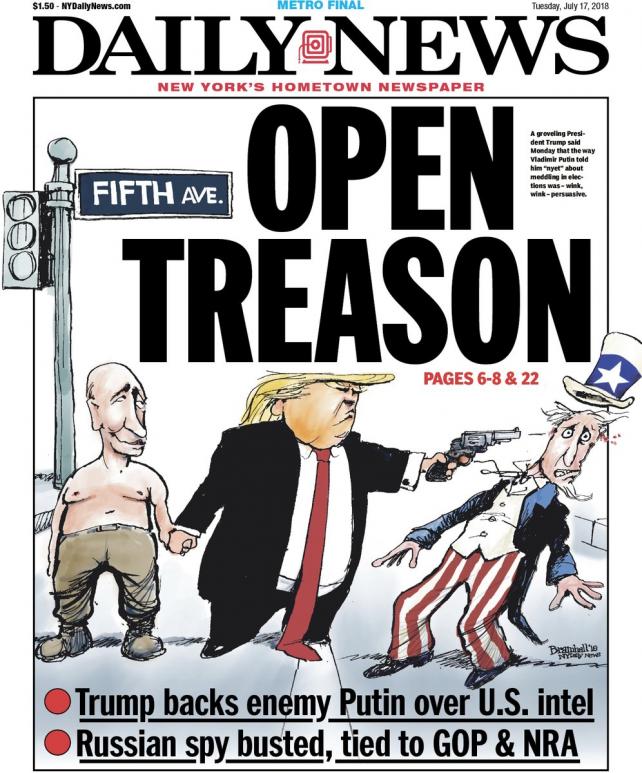